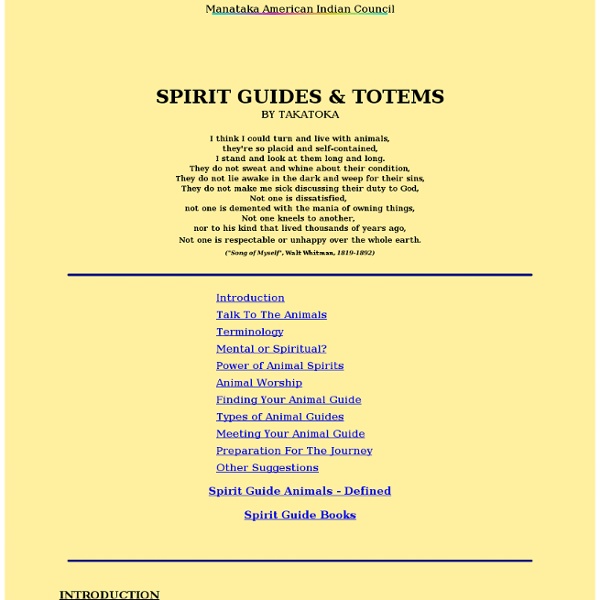 Manataka American Indian Council I think I could turn and live with animals, they're so placid and self-contained, I stand and look at them long and long. They do not sweat and whine about their condition, They do not lie awake in the dark and weep for their sins, They do not make me sick discussing their duty to God, Not one is dissatisfied, not one is demented with the mania of owning things, Not one kneels to another, nor to his kind that lived thousands of years ago, Not one is respectable or unhappy over the whole earth. ("Song of Myself", Walt Whitman, 1819-1892) Spirit Guide Animals - Defined Spirit Guide Books A long time ago, humans were created to be caretakers of the garden -- Mother Earth. Humankind knew if they attempted to conquer Mother Earth, they would bring great suffering upon themselves. American Indians, also known as the People of the Land, traditionally and historically hold a special knowledge of the land and its inhabitants. Everything on earth is alive;

Find your Spirit Animal - an online quiz - Jeri Smith-Ready Discover your Spirit Animal! Find out which Spirit Animal would bestow its magic on you. Pick the best answers from the choices below, then click "Find My Animal!" to see your results. Disclaimer This quiz is for entertainment purposes only. Discerning a person's true Animal Spirit is way beyond the abilities of a mere novelist, who, let's face it, makes things up for a living. For more information on spirit animals, check out these additional resources: BOOKS by Jeri Lust for Life — December 2012 Final book in the award-winning WVMP series Ciara must battle vengeful vampires and her own demons to win her ultimate happy ending. "Let It Bleed — June 2012 Free WVMP novella A can't-miss "bridge" between BRING ON THE NIGHT and LUST FOR LIFE! Shine — May 2012 Final book in the award-winning SHADE trilogy When tragedy spikes a worldwide fear of ghosts, Aura will do anything to save her generation's freedom—and the life of the boy she loves. Shift — May 2011 Sequel to the critically acclaimed SHADE

Horoscopes Within -Real Monthly Horoscope Forecasts and Astrology The Animal in You Personality Test Using Gemstones and Crystals in Meditation There are many other reasons why one might meditate, such as to develop the intuition, to learn from the higher senses, to cleanse and purify thoughts and emotions, to travel along one's spiritual path, to help one bring about changes in their life, to gain control over one's thoughts and feelings and how they are expressed, and to delve deep within oneself to discover and explore one's innermost being. These are just a few examples of what one may accomplish through meditation. Some people use crystals and stones to assist in obtaining a deep meditative state. calming blue stones, such as aquamarine, blue calcite, and turquoise, will help clear the mind and calm the body. A stone or crystal may be held or worn during meditation in order to absorb its properties. There is no right or wrong way to meditate. Quartz Crystal Meditation: Lie face up on a bed, floor, or other flat surface. Begin with the smoky quartz. Next, concentrate on the rose quartz. See the crown of your head opening.

Animal Spirit Energies Animal Images are from Art Today SoulTones Custom Banner by ABSINTH Home | Dream Catchers | My Photography | Vintage Postcards | Neil Diamond Online Tom Sadge | Bill Rasmussen | Jeanine | Astrology | Box Turtle Pages | (59) Pagan Magic - An Essay for School Teachers about Paganism "You... ANIMALS, BIRDS, AND INSECTS AND THEIR MEANINGS AARDVARK - a tendency to hide from problems ABOMINABLE SNOWMAN - denotes spiritual truths that are not easily accepted ALLIGATOR - spiritual aspects that are self-serving, can denotes a person who attacks out of nowhere, people who lie in wait and then attack, a person with vicious speech which is destructive ANT - denotes cooperation with others APE - cautions against loss of individuality, pretending to be someone who you are not, aping someone, being a copycat instead of your true self. A symbol of malice and ugliness. BABOON - immaturity or lack of individuality. BADGER - denotes a person with a 'nagging' personality, usually one who interferes with another's life. BAT - denotes the use of spiritual intuition in all aspects of life BEAGLE - (dog) refers to a sympathy seeking friend BEAR - an overbearing personality of a friend or situation, someone who can crush another with just a look or a word This negative creature is used in the business world also to denote a negative situation.

Hedgewitch Cooks Watch our pilot programme The Hedgewitch Cooks Spring on Vimeo now. We incorporate those things which matter most to us - family, food, health and relationships, demonstrating how to reconnect with nature and deal with our emotional well-being. We’ll present ancient knowledge that can be used by everyone today, wherever you live. The HedgeWitch Cooks get back to the old wisdom our grandparents knew and lived by - presenting simple household ideas that can enrich your lives. So it’s not just about cooking, it’s about improving the quality of your life and living in harmony with world around you. Ravenari's totem / animal guide dictionary Ravenari's Animal Energy / Animal Guide Dictionary Total Number of Animal Energies Represented: 290 Use Ctrl+F (or a similar search function) to search for animals you are looking for. Animals are listed by their name (i.e. Steller's Jay, Blue Jay, Western Scrub Jay), and also consider searching for simplifications like 'cat' or 'eagle.' Mammals / Marsupials / Monotremes Birds

Paganism & Neo - Paganism Paganism & Neo-Paganism The words 'Paganism' and 'Pagan' come from the Latin 'paganus,' meaning 'country dweller. In simplest terms - Paganism is a religion of place, or a native religion, for example the Native American's religion is Pagan, Hinduism is a form of Paganism. Paganism is a religion of nature, in other words Pagans revere Nature. Unlike the patriarchal religions (Christianity, Islam, Judaism) the divine is female as well as male and therefore there is a Goddess as well as a God. They are not simply substitutes for the Muslim or Judeo-Christian God. The Goddess represents all that is female and the God represents all that is male. There are sub-groups of named Gods and Goddesses called Pantheons, drawn from the distant past, for example Isis and Osiris from Egypt or Thor, Odin, Freya et al from Norse religion and mythology. Ancient Pagans would have worshipped one or a small number of Gods and Goddesses, while often recognizing the validity of other people's deities. The Moon

Sacred Directions of Animal Totems: Discover Your Animal Symbol The four directions are examined here within the context of the animal totems. Each direction has its own special characteristic and meaning. When the animals are seen coming from or going to a particular direction, the depth of meaning can be enhanced. This is another way to tune into the subtle language of animals. Intuitions and general knowledge should help you in discerning this unique relationship. North Lessons of Using Your Potential Magic: Manifestation Element: Earth Associated with the nobility of manifesting things from the true essence within you. balanceteachingabundanceknowledgesacred wisdomempathic intuitioninner treasuresthankfulnessdrawing forthgentlenessalchemytrust East Lesson of Responsible Relationships Magic: Higher Vision and Prophecy Element: Air Spiritual vision opens up, creativity, inspiration, higher awareness, higher intuitions, self-mastery through the use of will. QuestsVisionsDreamsImaginationInner Spiritual RenewalHigher CompassionJourneysEmotionsGoals South