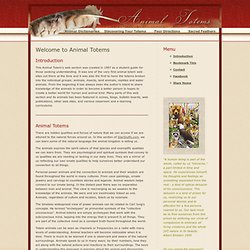 It was one of the very first animal totem web sites out there at the time and it was also the first to have the totems broken into the individual groups; animals, insects, land animals, reptiles and water animals. From the beginning it has always been the author's intent to share knowledge of the animals in order to become a better person in hopes to create a better world for human and animal kind. Many parts of this web section and its animals has been featured in ezines, blogs, bulletin boards, web publications, other web sites, and various classroom and e-learning curriculums. Animal Totems There are hidden qualities and forces of nature that we can access if we are attuned to the natural forces around us. The animals express the spirit nature of that species and exemplify qualities we can learn from. 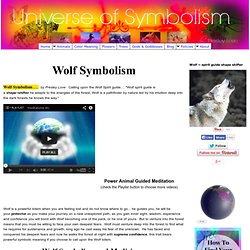 "Wolf spirit guide is a shape~shifter he adapts to the energies of the forest, Wolf is a pathfinder by nature led by his intuition deep into the dark forests he knows the way. " Wolf is a powerful totem when you are feeling lost and do not know where to go... he guides you, he will be your protector as you make your journey on a new unexplored path, as you gain inner sight, wisdom, experience and confidence you will bond with Wolf becoming one of the pack, or he one of yours. But to venture into the forest means that you must be willing to face your own deepest fears. Wolf must venture deep into the forest to find what he requires for sustenance and growth, long ago he cast away his fear of the unknown. He has faced and conquered his deepest fears and now he walks the forest at night with supreme confidence, this trait bears powerful symbolic meaning if you choose to call upon the Wolf totem.

Most Popular Pages :) ANIMAL SPIRIT GUIDES. Manataka American Indian Council I think I could turn and live with animals, they're so placid and self-contained, I stand and look at them long and long. 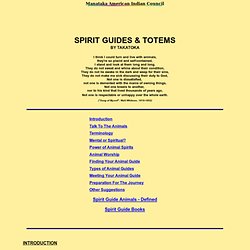 They do not sweat and whine about their condition, They do not lie awake in the dark and weep for their sins, They do not make me sick discussing their duty to God, Not one is dissatisfied, not one is demented with the mania of owning things, Not one kneels to another, nor to his kind that lived thousands of years ago, Not one is respectable or unhappy over the whole earth. ("Song of Myself", Walt Whitman, 1819-1892) Spirit Guide Animals - Defined Spirit Guide Books A long time ago, humans were created to be caretakers of the garden -- Mother Earth. Humankind knew if they attempted to conquer Mother Earth, they would bring great suffering upon themselves. Spirit Walk Ministry - Land Animal Spirits. Aardvark (Anteater) -- Ability to find lost objects, connection to the insect world, can smell out trouble before seeing it, slow-moving old biddy, cannot help sticking its nose where others don't want it Antechinus -- Sacrificing health for children. 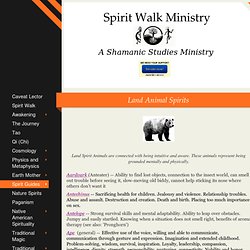 Jealousy and violence. Relationship troubles. Abuse and assault. Destruction and creation. Antelope -- Strong survival skills and mental adaptability. Ape ,(general) ---Effective use of the voice, willing and able to communicate, communication through gesture and expression. Armadillo -- Carrying personal protection. Baboon -- Four baboons stand in the Hall of Judgment, listening to the appeals of the departed; the baboon is a counselor and mediator of the Egyptian gods who assists in the judgment of souls bound for the underworld. Badger -- A keeper of stories with Earth knowledge and wisdom. Bandicoot -- (The Gentle Shadow) Earth magic, sand magic. Native American Totems and Their Meanings - Page 2. Tiger Spirit. Tiger spirit animal and totem meaning In the kingdom of spirit animals, the tiger puts a special emphasis on raw feelings and emotions. 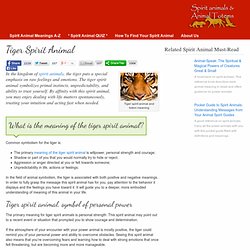 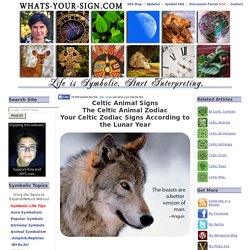 I've selected each Celtic sign according to their prominence and affiliation with the full moon within each segment of the Celtic (lunar) year. The Celts honored the rhythms of Nature, and observed different flavors of their environment according to the season. Like our Native American kin, the full moon in each month held a special personality. To know more clearly what I mean by this, check out this page devoted to Native American full moons and their personalities.

I cannot say the ancient Celts designated zodiac totem animals according to the time and day of a kinsman/kinswoman's birth. There seems to be no separation between Celtic-kind and animal-kind.