"Animal Farm," Vocabulary from Ch's 9-10 - Vocabulary List. Poultice a medical dressing spread on a cloth and applied to the skinClover treated the hoof with poultices of herbs which she prepared by chewing them, and both she and Benjamin urged Boxer to work less hard. 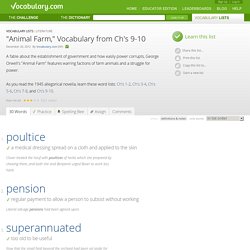 Pension regular payment to allow a person to subsist without workingLiberal old-age pensions had been agreed upon. Superannuated too old to be usefulNow that the small field beyond the orchard had been set aside for barley, it was rumoured that a corner of the large pasture was to be fenced off and turned into a grazing-ground for superannuated animals. Readjustment the act of correcting again For the time being, certainly, it had been found necessary to make a readjustment of rations (Squealer always spoke of it as a “ readjustment,” never as a “reduction”), but in comparison with the days of Jones, the improvement was enormous. "Animal Farm," Vocabulary from Ch's 7-8 - Vocabulary List. Ration a fixed portion that is allottedThe corn ration was drastically reduced, and it was announced that an extra potato ration would be issued to make up for it. 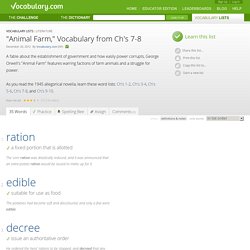 Edible suitable for use as foodThe potatoes had become soft and discoloured, and only a few were edible. Decree issue an authoritative orderHe ordered the hens’ rations to be stopped, and decreed that any animal giving so much as a grain of corn to a hen should be punished by death. Pile a collection of objects laid on top of each otherIt happened that there was in the yard a pile of timber which had been stacked there ten years earlier when a beech spinney was cleared. "Animal Farm," Vocabulary from Ch's 5-6 - Vocabulary List. Hedge a fence formed by a row of closely planted shrubs or bushesThis morning I saw you looking over the hedge that divides Animal Farm from Foxwood. 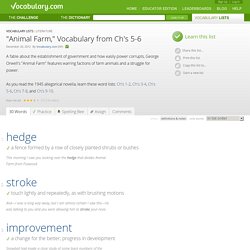 Stroke touch lightly and repeatedly, as with brushing motionsAnd—I was a long way away, but I am almost certain I saw this—he was talking to you and you were allowing him to stroke your nose. Vocabulary from Animal Farm, Chapters 3-4 - Vocabulary List. Toil work hardHow they toiled and sweated to get the hay in! 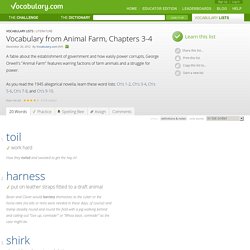 Harness put on leather straps fitted to a draft animalBoxer and Clover would harness themselves to the cutter or the horse-rake (no bits or reins were needed in these days, of course) and tramp steadily round and round the field with a pig walking behind and calling out “Gee up, comrade! " or “Whoa back, comrade!” As the case might be. Shirk avoid one's assigned dutiesNobody stole, nobody grumbled over his rations, the quarreling and biting and jealousy which had been normal features of life in the old days had almost disappeared. Nobody shirked—or almost nobody. "Animal Farm," Vocabulary from Chapters 1-2 - Vocabulary List. Stout euphemisms for `fat'He was twelve years old and had lately grown rather stout, but he was still a majestic-looking pig, with a wise and benevolent appearance in spite of the fact that his tushes had never been cut. 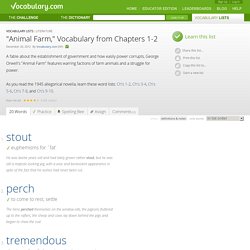 Perch to come to rest, settleThe hens perched themselves on the window-sills, the pigeons fluttered up to the rafters, the sheep and cows lay down behind the pigs and began to chew the cud. Animal farm. Animal Farm. George Orwell Timeline of Important Dates. How It All Went Down Jun 25, 1903 George Orwell Born Eric Arthur Blair—later known as George Orwell—is born in Motihari, Bengal, a British colony in what is now India. 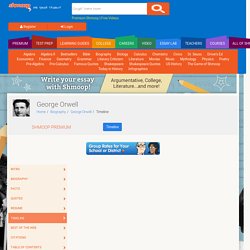 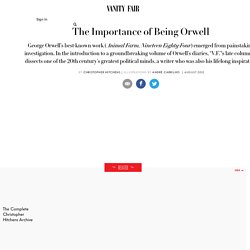 In the introduction to a groundbreaking volume of Orwell’s diaries, V.F.’s late columnist dissects one of the 20th century’s greatest political minds, a writer who was also his lifelong inspiration At various points in his essays—notably in “Why I Write” but also in his popular column “As I Please”—George Orwell gave us an account of what made him tick, as it were, and of what supplied the motive for his work. At different times he instanced what he called his “power of facing unpleasant facts”; his love for the natural world, “growing things,” and the annual replenishment of the seasons; and his desire to forward the cause of democratic socialism and oppose the menace of Fascism. British author. 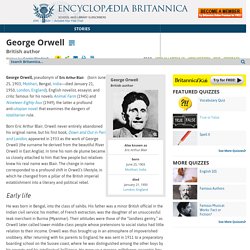 Born Eric Arthur Blair, Orwell never entirely abandoned his original name, but his first book, Down and Out in Paris and London, appeared in 1933 as the work of George Orwell (the surname he derived from the beautiful River Orwell in East Anglia). In time his nom de plume became so closely attached to him that few people but relatives knew his real name was Blair. History - Historic Figures: George Orwell (1903 - 1950) George Orwell - Author, Journalist.