Barn Owl, Identification, All About Birds - Cornell Lab of Ornithology. The RSPB: Barn owl. Conservation status: Amber With heart-shaped face, buff back and wings and pure white underparts, the barn owl is a distinctive and much-loved countryside bird. 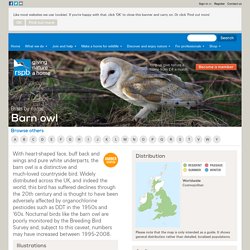 Widely distributed across the UK, and indeed the world, this bird has suffered declines through the 20th century and is thought to have been adversely affected by organochlorine pesticides such as DDT in the 1950s and '60s. Nocturnal birds like the barn owl are poorly monitored by the Breeding Bird Survey and, subject to this caveat, numbers may have increased between 1995-2008.

Barn owl Barn owl - in flight Latin name Tyto alba Family Owls (Tytonidae) Where to see them Open country, along field edges, riverbanks and roadside verges. When to see them All year round; during the day, but best at dusk. What they eat. Tarantulas, Tarantula Pictures, Tarantula Facts - National Geographic. Tarantulas give some people the creeps because of their large, hairy bodies and legs. 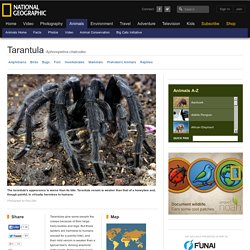 But these spiders are harmless to humans (except for a painful bite), and their mild venom is weaker than a typical bee's. Among arachnid enthusiasts, these spiders have become popular pets. Tarantulas periodically shed their external skeletons in a process called molting. In the process, they also replace internal organs, such as female genitalia and stomach lining, and even regrow lost appendages. There are hundreds of tarantula species found in most of the world's tropical, subtropical, and arid regions. Tarantulas are slow and deliberate movers, but accomplished nocturnal predators. A tarantula doesn't use a web to ensnare prey, though it may spin a trip wire to signal an alert when something approaches its burrow. 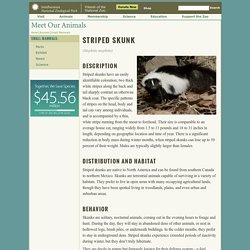 The specific patterns of stripes on the head, body and tail can vary among individuals, and is accompanied by a thin, white stripe running from the snout to forehead. Their size is comparable to an average house cat, ranging widely from 1.5 to 13 pounds and 18 to 31 inches in length, depending on geographic location and time of year. There is a significant reduction in body mass during winter months, when striped skunks can lose up to 50 percent of their weight. Distribution and Habitat Striped skunks are native to North America and can be found from southern Canada to northern Mexico. 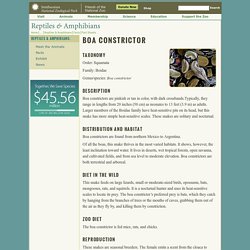 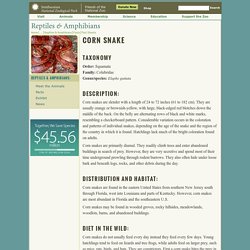 They are usually orange or brownish-yellow, with large, black-edged red blotches down the middle of the back. On the belly are alternating rows of black and white marks, resembling a checkerboard pattern. Corn snakes are primarily diurnal. Distribution and Habitat: Corn snakes are found in the eastern United States from southern New Jersey south through Florida, west into Louisiana and parts of Kentucky. Corn snakes may be found in wooded groves, rocky hillsides, meadowlands, woodlots, barns, and abandoned buildings. Diet in the Wild: Corn snakes do not usually feed every day instead they feed every few days. Zoo Diet: They are fed mice, rats, and chicks. Reproduction: The breeding season of corn snakes is from March to May. Life Span: The life span of the snake is up to 23 years in captivity, but is generally much less in the wild.

The Bearded Dragon » Everything About Bearded Dragons. Leopard Gecko Care. LEOPARD GECKO CARE - Basic The leopard gecko, (Eublepharis macularius), has been captive-bred in the United States for more than 30 years and is one of the most commonly kept lizards today. 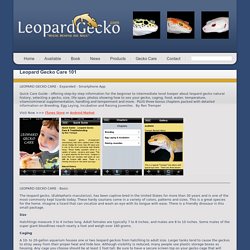 These hardy saurians come in a variety of colors, patterns and sizes. This is a great species for the home. Imagine a lizard that can vocalize and wash an eye with its tongue with ease. There is a friendly dinosaur in this small package. Size Hatchlings measure 3 to 4 inches long. Caging A 10- to 20-gallon aquarium houses one or two leopard geckos from hatchling to adult size.

A hide box filled with moist moss or vermiculite is needed, so your leopard gecko can shed its skin properly. Lighting and Temperature The best way to heat your leopard gecko is by using an undertank heating pad or tape. For viewing, a simple low-wattage light can be placed overhead on the screen-cage top and left on 12 hours a day. The ideal temperature in the hide box is 86 to 90 degrees Fahrenheit at all times. Substrate Food Water.