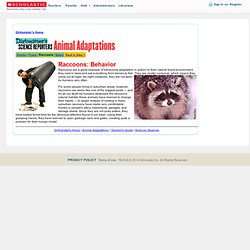 In their natural forest environment, they nest in trees and eat everything from berries to fish. They are mostly nocturnal, which means they come out at night. As night creatures, they are not seen by humans very often. For some people living in suburban areas, however, raccoons can seem like one of the biggest pests — and it's all our fault! Dirtmeister's Home | Animal Adaptations | Teacher's Guide | Science Observer. A Student's Guide to Global Climate Change. Most plants and animals live in areas with very specific climate conditions, such as temperature and rainfall patterns, that enable them to thrive. 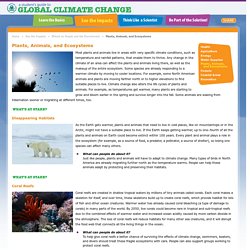 Any change in the climate of an area can affect the plants and animals living there, as well as the makeup of the entire ecosystem. Some species are already responding to a warmer climate by moving to cooler locations. For example, some North American animals and plants are moving farther north or to higher elevations to find suitable places to live.

Climate change also alters the life cycles of plants and animals. For example, as temperatures get warmer, many plants are starting to grow and bloom earlier in the spring and survive longer into the fall. Disappearing Habitats As the Earth gets warmer, plants and animals that need to live in cold places, like on mountaintops or in the Arctic, might not have a suitable place to live. Habitat and Adaptation. Every organism has a unique ecosystem within which it lives. 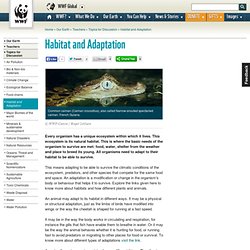 This ecosystem is its natural habitat. This is where the basic needs of the organism to survive are met: food, water, shelter from the weather and place to breed its young. All organisms need to adapt to their habitat to be able to survive. This means adapting to be able to survive the climatic conditions of the ecosystem, predators, and other species that compete for the same food and space. An adaptation is a modification or change in the organism's body or behaviour that helps it to survive. An animal may adapt to its habitat in different ways. It may be in the way the body works in circulating and respiration, for instance the gills that fish have enable them to breathe in water. An animal's environment consists of many different things.

Animals in the wild can only live in places they are adapted to. Did you know that animals camouflage themselves so they can adapt to their environment? Snowshoe Hare. Genus: LepusSpecies: americanus Description: Snowshoe hares make their home in dense coniferous forests. 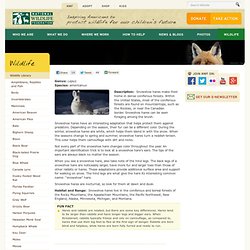 Within the United States, most of the coniferous forests are found on mountaintops, such as the Rockies, or near the Canadian border. Snowshoe hares can be seen foraging among the brush. Snowshoe hares have an interesting adaptation that helps protect them against predators. Depending on the season, their fur can be a different color. Not every part of the snowshoe hare changes color throughout the year. When you see a snowshoe hare, also take note of the hind legs.

Snowshoe hares are nocturnal, so look for them at dawn and dusk. Chameleon. All chameleons are found in the Old World, but most live in Madagascar and Africa. 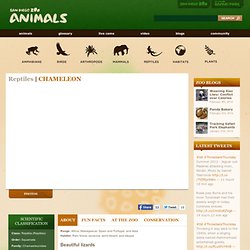 Camel Adaptations. Animals in winter - Hibernation, Migration and Adaptation. How Do Animals Spend the Winter? 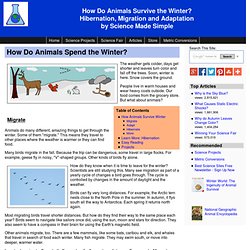 The weather gets colder, days get shorter and leaves turn color and fall off the trees. Soon, winter is here. Snow covers the ground. People live in warm houses and wear heavy coats outside. Our food comes from the grocery store. Migrate. Structural and Behavioral Adaptations. All organisms have adaptations that help them survive and thrive. 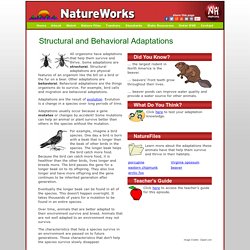 Some adaptations are structural. Structural adaptations are physical features of an organism like the bill on a bird or the fur on a bear. Polar Bears. Polar bears are amazing – and we’re not talking about fictional armored polar bears now. 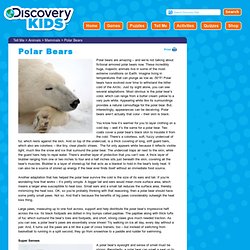 These incredibly huge, majestic animals live in some of the most extreme conditions on Earth. Imagine living in temperatures that can plunge as low as -50°F! Polar bears have evolved over time to withstand the bitter cold of the Arctic. Just by sight alone, you can see several adaptations. Most obvious is the polar bear’s color, which can range from a butter cream yellow to a very pure white. A polar bear’s eyesight and sense of smell must be strong. Polar bears belong to the genus and species Ursus maritimus, which means, “sea bear.”