The 7 Most Terrifyingly Huge Things in the History of Nature 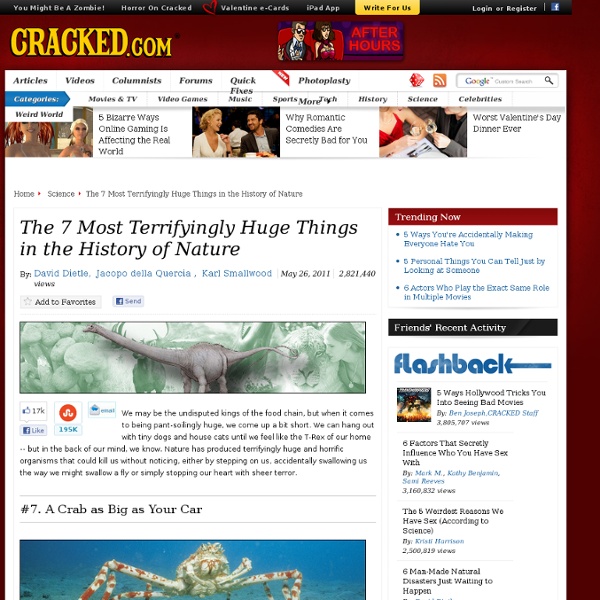 We may be the undisputed kings of the food chain, but when it comes to being pant-soilingly huge, we come up a bit short. We can hang out with tiny dogs and house cats until we feel like the T-Rex of our home -- but in the back of our mind, we know. Nature has produced terrifyingly huge and horrific organisms that could kill us without noticing, either by stepping on us, accidentally swallowing us the way we might swallow a fly or simply stopping our heart with sheer terror. A Crab as Big as Your Car They say a picture is worth a thousand words. Via Wikimedia CommonsIn this case, almost all of them are some variation of AHHHHHHHHHHHHHHHHHHHH! Japanese spider crabs, in what we can only assume is a cruel joke from God, possess all the most terrifying qualities of each of its namesakes. Long spindly legs to help it creep through your nightmares.A terrifyingly disproportionate body just to freak you out.The ability to trigger the primal arachnophobe inside us all. Via NHM And from crabs it has:

Aproximación al Estudio de los Restos Momificados * Estudiante de la Universidad de Buenos Aires, Facultad de Filosofía y Letras. Ciencias Antropológicas - Orientación Arqueológica. ** Estudiante de la Universidad de Buenos Aires, Facultad de Filosofía y Letras. Ciencias Antropológicas - Orientación Sociocultural. ÁREA TEMÁTICA: BIOARQUEOLOGIA Palabras Clave: Momificación - Estudio - Conservación - Metodología Introducción: Se entiende por MOMIA a todo cadáver bien conservado, en el cual se observan presentes tejidos blandos, músculos, cabellos, piel, etc. La palabra Momia es originaria de Persia y deriva de la palabra MUMMEIA o MUM, que significa asfalto o piche, sustancia empleada para tratar los cuerpos. 6 Things That Shouldn't Explode (But Did Anyway) Michael Bay is right: Somewhere, right now, something is exploding. And we're not talking bombs and tankers either. As it turns out, there are objects all over the place that will suddenly explode the shit out of themselves for absolutely no reason at all, and often when you least expect it. Things like... Imagine this scene: You sleep through your alarm and have to skip a shower to make the bus on time, only the elevator to your apartment jams and you miss the bus anyway and have to take a cab. Basically you are Peter Parker. Utterly defeated, you sink into your ergonomically designed desk chair, which then blows the fuck up like Danny Glover's toilet in Lethal Weapon 2. Sound like John Woo's Office Space? "I heard a sonic boom and suddenly my asshole was pregnant." How worried should you be? We suppose that should make us feel better, but all we can think of is if it happens tomorrow, we'll have the added bonus of going down as the first person in history to die from anal chair rape.

5 Amazing Abandoned Wastelands ... Within Walking Distance Abandoned places have a certain exotic appeal. There's something in these haunting images that speaks to us about the crumbling of society's facades, the fleeting nature of civilization, the implacable will of nature and the ability to throw bottles at shit without The Man giving you guff. But short of something horrible, like a major apocalyptic disaster or a mid-length hike, how could you ever get to see the post-apocalyptic world of tomorrow, today? Well, hell, son: These things are all around you. Some of the craziest abandoned places in the world are here in the cities we live in, in some cases literally right beneath your feet at this very moment. #5. North Brother Island is a 20-acre plot of land in New York that lies completely empty. In the 19th century, a hospital for infectious diseases was housed on North Brother Island. "Triple" is perhaps aiming a tad low. Unfortunately for breathless blue-eyed vixens everywhere, the public is not allowed to visit the island. #4. #3.

5 Real Animal Friendships Straight Out of a Disney Movie Cartoons notwithstanding, we are generally raised with the knowledge that animals kill one another. The process is messy, but it's all a part of an intricate balance; the death of one creature provides life for another. But just sometimes, vicious carnivores of the world take an appraising look at centuries of biological necessity, then turn their back on it and say, "Screw that noise, let's be friends." #5. Snake Decides a Hamster Is Better as a Roommate Hamsters, like most rodents, are the meal of choice for many snakes. And then there's Japan. Aochan is a Japanese rat snake held at a Tokyo zoo. So they took a female dwarf hamster, dropped her into Aochan's cage and waited for nature to take its course. Then pulled the blanket over his head and gave him a Dutch Oven. Did Aochan fly into a mindless rage, seeing his pride as a rat snake being torn to shreds by this overtly friendly furball? We feel it's worth noting that Aochan wasn't just a random snake that likes to eat rodents. #4. #3.

Grand prismatic spring (8 votes, average: 4.50 out of 5) Loading ... Posted in Images on August 1st, 2008 by egosumnemo | Report This Post | Add to favoritesTags: Nature, Science! The vivid colors in the spring are the result of pigmented bacteria in the microbial mats that grow around the edges of the mineral-rich water. The deep blue color of the water in the center of the pool results from a light-absorbing overtone of the hydroxy stretch of water.[6] Though this effect is responsible for making all large bodies of water blue, it is particularly intense in Grand Prismatic Spring because of the high purity and depth of the water in the middle of the spring. en.wikipedia.org/wiki/Grand_Prismatic_Spring

6 Ridiculous Sex Myths (That Are Actually True) The only thing more awesome than an urban legend turning out to be true is if that same legend involves some sort of nefarious sex or groin related hilarity. Luckily, all of these qualify. The Legend: "Dude, I can totally tell he's gay! Look at his fingers!" This sounds like one of those playground urban myths that adolescent males use as an excuse to punch each other. Yeah, right. The Truth: Incredibly, this is a real thing. Apparently if you have a longer ring finger, it means you got more testosterone as a fetus and are more likely to be hyperactive, aggressive and disgusted by anything featuring Hugh Grant. A longer index finger, on the other hand, means more estrogen, making you more neurotic and sensitive. Actually, no. So... how far into this entry did you get before you stopped to look at your fingers? The Dong Stuck in a Pool Filter So you're swimming around the pool and you pass by the humming filter, sucking debris out of the water. "I bet I'll never have to touch some dude's dong."

7 (Thankfully) Extinct Giant Versions of Modern Animals The animal kingdom is loaded with some pretty formidable creatures, a few of which we as humans are only barely able to keep in line even with modern technology. As it turns out, many of these species are the diminutive descendents of giants so mind bogglingly huge and terrifying that they could probably take over the entire world with minimal effort. Meganeura, The Giant Dragonfly Meganeura were enormous dragonfly-like insects with wingspans the length of an average toddler, making them among the largest flying predatory insects in the history of the world. Their diet consisted mainly of other insects, small amphibians and the dreams of children. Some scientists think that Meganeura were actually too big to be able to survive in the current atmosphere, citing the higher oxygen concentration in the prehistoric world as the only way an insect its size would be able to breathe in enough to support its massive body. Why it's a Good Thing They're Dead: That. Did we mention the claws? Exhibit A.

baby chameleons photo Random photo Submit your photo Stumble Thru animal photography Tags: baby animal chameleon baby chameleons by igor siwanowicz 1 047 420 views Rating: +26 a happy family of polar bears baby meerkats cute “mini lion” kitten Adorable Photos of Animals With Their Babies That Will Make You Go ‘Aww’ Place your ad here Loading... About OneBigPhoto is your daily dose of high quality photos. 2726 photos uploaded Important stuff Top rated Top galleries Submit photo Privacy policy Wallpaper Contact us Connect with us Search Some rights reserved. ©2013 OneBigPhoto.com Making the Dead Beautiful: Mummies as Art November is the Month of the Dead. The deceased were removed from their graves, redressed with rich garments and feathers. They gave the dead food and drink. The people danced and sang with the dead, parading them around the streets. Missionaries working in Peru following the Spanish conquest were disgusted by the Inka's worshiping the mummified remains of their ancestors. The Inka were the last in a long line of Andean peoples to preserve and display the remains of their forebears that began with the Chinchorro, a little known fisherfolk who inhabited a 400-mile stretch of South American coast--from Ilo in southern Peru to Antofagasta in northern Chile--more than 7,000 years ago. The earliest known mummy, that of a child from a site in the Camarones Valley, 60 miles south of Arica, dates to ca. 5050 B.C. The black style (ca. 5050-2500 B.C.), was by far the most complex. About 2500 B.C., black went out of fashion, perhaps reflecting a change in ideology. Bernardo T. Further Reading Share

11 Everyday Things That Are Terrifying Under a Microscope As human beings, we go about our day-to-day lives, completely oblivious to the microscopic world around us. And that ignorance is great, because most of that microscopic world is scary as hell. Cracked has touched on some of these horrors before, but like the Leprechaun movies, the terror could not be confined to just one installment. #11. At Normal Size: Odds are there's at least one pillow lying on your bed right now, but here's a picture anyway: GettyEveryone on board so far? You rest your head on one almost every night (excepting those instances where you wake up in a daze on bloodied tile/pavement with a racketeer's jawbone in your vest pocket). But Up Close ... You couldn't be more wrong. Unseen Companions via Apartment Therapy"We're just waiting for an ear to crawl into." Those are common house dust mites. #10. Hydrothermal vent worms are so tiny that you can't see them. Oh, they're in there. FEIRun, Kevin Bacon, run! #9. Getty Your tongue is that thing sitting in your mouth right now:

6 Ancient Sports Too Awesome For the Modern World It's amazing how crazy people get about sports these days, especially considering how much sports suck compared to what they used to be. No, we're not talking about the 1940s when football players wore leather helmets. We're talking about the ancient sports where Viking rape was a trophy and "crocodile death" had its own slot on the scoreboard. Mesoamerican Ballgame Long before soccer (and smallpox) took pre-Columbian America by storm, the official sport of Ancient Mexico was an odd game that the Mayans called pitz. "I don't know what this game is or why the hell we're playing it." The "Game" Mesoamerican Ballgame was a lot like volleyball, except the ball involved was nine pounds of solid rubber. Players had to keep the heavy bastard in play by bouncing it off their forearms, hips, elbows and (if you're a sissy) bats and rackets. Face blocks, while legal, cannot in good conscience be recommended. The Mesoamericans included one final draw to wow their crowd. How is that "Insane"? "Yes."