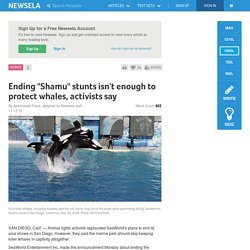 However, they said the marine park should stop keeping killer whales in captivity altogether. SeaWorld Entertainment Inc. made the announcement Monday about ending the shows. Visitors at the San Diego park made it clear they prefer seeing killer whales act naturally rather than doing tricks. The famous "Shamu" show began at the San Diego park many years ago. It featured killer whales doing flips and other stunts. New Focus On Natural Orca Behavior SeaWorld head Joel Manby said the park will offer a different kind of orca experience, starting in 2017. Ringling Bros. eliminating elephant acts. The Ringling Bros. and Barnum & Bailey Circus is ending its iconic elephant acts. 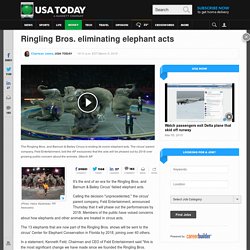 The circus' parent company, Feld Entertainment, told the AP exclusively that the acts will be phased out by 2018 over growing public concern about the animals. (March AP. Abby Reiman Just Made Virginia Safer for Animals. Virginia’s Fairfax County Public Schools will no longer have “torture trays” hidden in the dark shadows of classrooms, thanks to rockin’ animal activist and high school junior Abby Reiman! 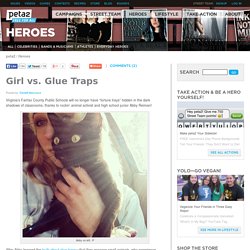 How One Student Got Her School District to Ban Glue Traps. Thanks to Abby Reiman, a passionate young animal advocate and 11th-grade student, the public schools in Fairfax County, Virginia, will no longer have glue traps on their campuses! 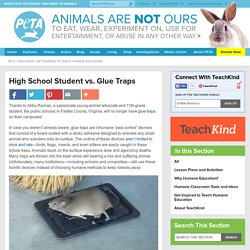 In case you weren’t already aware, glue traps are inhumane “pest control” devices that consist of a board coated with a sticky adhesive designed to ensnare any small animal who wanders onto its surface. The victims of these devices aren’t limited to mice and rats—birds, frogs, insects, and even kittens are easily caught in these torture traps. Animals stuck on the surface experience slow and agonizing deaths. Many traps are thrown into the trash while still bearing a live and suffering animal. Unfortunately, many institutions—including schools and universities—still use these horrific devices instead of choosing humane methods to keep rodents away. Teachers: Your voice can make a difference, too! Apes have rights too, court rules. A court in Argentina has decided that an ape has the same rights as a human. 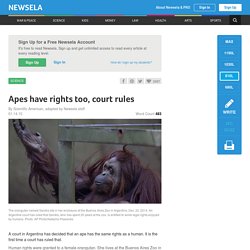 It is the first time a court has ruled that. Human rights were granted to a female orangutan. She lives at the Buenos Aires Zoo in Argentina. The ruling will change the life of the orangutan forever. Voting to give bears a fair chance. NEW YORK — It's been a big news year for bears, especially in Maine. 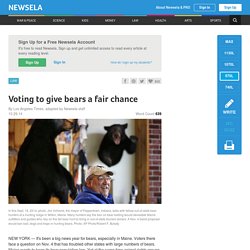 Voters there face a question on Nov. 4 that has troubled other states with large numbers of bears. Maine wants to keep its bear population low. Obama goes after the ivory trade to protect African elephants. WASHINGTON — The United States is cracking down on the sale of ivory. 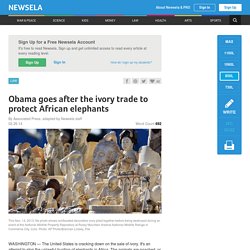 SeaWorld, activists make questionable claims on killer whale life spans. ORLANDO, Fla. — In the middle of “Blackfish,” the scathing documentary about SeaWorld’s killer whale program, an activist says the whales in SeaWorld parks die early while their counterparts in the wild live as long as humans. 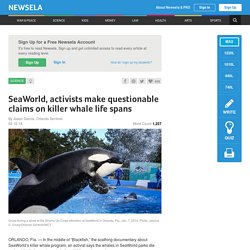 The claim, which goes unchallenged in the film, is a powerful contrast, meant to suggest that the giant marine mammals suffer when forced to live in man-made pools. Yet SeaWorld Entertainment Inc. says its killer whales have life spans equivalent to those of wild orcas, an assertion the company makes to show that it provides a healthful, stimulating environment for the 29 orcas it owns at four marine parks — the largest captive collection on the planet. The truth is not nearly as simple as either side claims. The fact is that scientists don’t know for sure how long killer whales live. “This is a debate, but you have to debate with facts,” added Hargrove, who appears on screen in “Blackfish.” Individual whales can live much longer. SeaWorld, activists make questionable claims on killer whale life spans. Farmers weigh in on undercover video at Wisconsin dairy. MILWAUKEE — Incidents of sick and injured dairy cows being slapped, poked and forced to their feet with heavy machinery — while not common — may not be that unusual, according to farmers and others who viewed an undercover video this week from the Wiese Brothers Farm in Brown County, Wis. 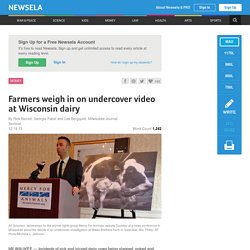 While not defending practices such as suspending a disabled cow in the air with a mechanical lift, farmers said parts of the video could be explained as necessary actions. Sometimes you can sneak up behind a downed cow, scream at it, and scare the animal into getting back on its feet, said Paul Rozadowski, a dairy farmer from Stanley. “When you have a downed cow with milk fever, you have to try and get her back on her feet as soon as possible. 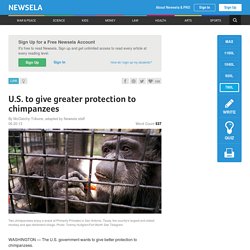 Six states get into an egg fight with California's new law. WASHINGTON — California is being sued for a law it passed. Californians voted to prevent the sale of eggs in California that come from hens kept in cramped cages. And now six states are suing California. It's a case that could affect farmers and people shopping for eggs all over America.