New hope for transplant patients: Scientists GROW tiny liver in a lab that could one day patch up diseased and damaged organs. Scientists have grown a tiny liver that could be used to test new medicinesThe research is at an early stage but experts believe it could be an alternative to organ transplantsJapanese researchers used the three types of cell that generate the liver in a human embryo to grow a tiny piece of tissue in a dishThe manmade tissue had many of the hallmarks of a working human liver, including the ability to break down drugsIt is hoped the first tests on people can be done in a decade By Fiona Macrae Published: 17:03 GMT, 3 July 2013 | Updated: 06:44 GMT, 4 July 2013. 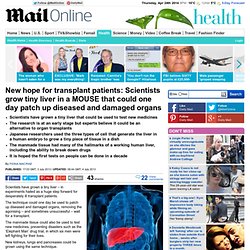 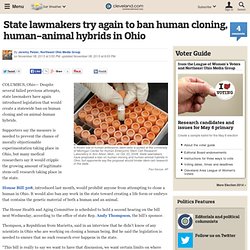 State lawmakers have proposed a ban on human cloning and human-animal hybrids in Ohio, but opponents say the proposal would hinder stem-cell research in the state.Paul Sancya, AP COLUMBUS, Ohio— Despite several failed previous attempts, state lawmakers have again introduced legislation that would create a statewide ban on human cloning and on animal-human hybrids. Supporters say the measure is needed to prevent the chance of morally objectionable experimentation taking place in Ohio, but many medical researchers say it would cripple the growing amount of legitimate stem-cell research taking place in the state. House Bill 308, introduced last month, would prohibit anyone from attempting to clone a human in Ohio. Dr. Ethics of Research Using Hybrids, Chimeras and Cytoplasmic Hybrids - Stem Cell Network.

Animal/Human Hybrids. Share on Facebook Written by Heather Zeiger Editor’s Note: The bulk of Heather Zeiger’s study in bioethics has focused on the major issues addressed in American media, politics and science, such as stem cells, cloning and euthanasia, which is why she so anticipated this year’s theme for the Center for Bioethics and Human Dignity Conference: Global Bioethics. 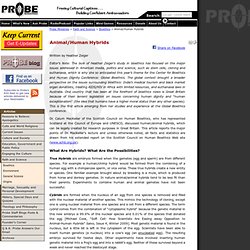 The global context brought a broader perspective on the issues surrounding bioethics: India’s medical tourism and black market organ donations, treating AIDS/HIV in Africa with limited resources, and euthanasia laws in Australia. One country that has been at the forefront of bioethics news is Great Britain because of their lenient legislation on issues concerning human dignity and "human exceptionalism" (the idea that humans have a higher moral status than any other species). This is the first article emerging from her studies and experience at the Global Bioethics conference. Dr. What Are Hybrids? Is This Legal? Legal Consequences. October 2013 BREAKING NEWS labs Mixing Human DNA Animal DNA - Last days final hour news prophecy. Scientists grow 'tiny livers' from human stem cells - Health News. Thursday July 4 2013 Scientists hope to one day grow replacement organs "Tiny functioning human livers have been grown from stem cells in the laboratory," BBC News reports. 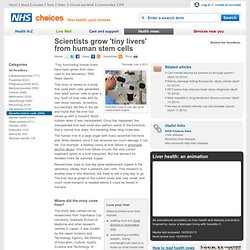 This story is based on a study that used stem cells generated from adult human cells to grow a tiny "bud" of liver cells with its own blood vessels. Scientists successfully did this in the lab and found that the liver bud joined up with a mouse's blood system when it was transplanted. Once this happened, the transplanted liver bud could also perform some of the functions that a normal liver does, like breaking down drug molecules. Researchers hope to one day grow replacement organs in the laboratory, ideally from a patient's own cells. Where did the story come from? The study was carried out by researchers from Yokohama City University Graduate School of Medicine and other research centres in Japan. Even if it is does eventually become used for this purpose, it could not predict all drug side effects.

Conclusion. Human-Animal Hybrids: Sick And Twisted Chimeras Are Being Created In Labs All Over The Planet. By Michael Snyder Did you know that scientists all over the globe are creating extremely bizarre human-animal chimeras? 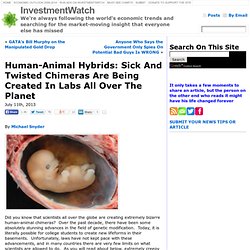 Over the past decade, there have been some absolutely stunning advances in the field of genetic modification. Today, it is literally possible for college students to create new lifeforms in their basements. Unfortunately, laws have not kept pace with these advancements, and in many countries there are very few limits on what scientists are allowed to do. ‘Frankenstein’: UK scientists warn about secret human-animal hybrid research. LONDON, July 25, 2011 (LifeSiteNews.com) - In a scenario that a panel of scientists with the Academy of Medical Sciences warned bears resemblance to Mary Shelley’s “Frankenstein,” British scientists have created more than 150 human-animal hybrid embryos in secret research conducted in British laboratories. 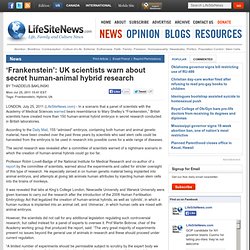 According to the Daily Mail, 155 “admixed” embryos, containing both human and animal genetic material, have been created over the past three years by scientists who said stem cells could be harvested from the embryos to be used in research into possible cures for a wide range of diseases. The secret research was revealed after a committee of scientists warned of a nightmare scenario in which the creation of human-animal hybrids could go too far. Professor Robin Lovell-Badge of the National Institute for Medical Research and co-author of a report by the committee of scientists, warned about the experiments and called for stricter oversight of this type of research.