Car-licking moose prompts warning in southern Alberta - Calgary. Vancouver Island dog obedience class's unlikely participant. Tiger befriends goat at Russian safari park. A bromance has developed between a rare Amur tiger and a goat that was intended to be his meal at Pirmorsky safari park in Russia. 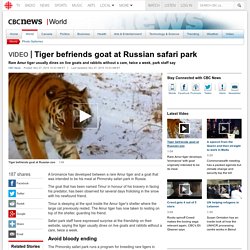 The goat that has been named Timur in honour of his bravery in facing his predator, has been observed for several days frolicking in the snow with his newfound friend. Timur is sleeping at the spot inside the Amur tiger's shelter where the large cat previously rested. The Amur tiger has now taken to resting on top of the shelter, guarding his friend. Safari park staff have expressed surprise at the friendship on their website, saying the tiger usually dines on live goats and rabbits without a care, twice a week. Teen arrested for tweeting terrorism 'joke' at American Airlines - Your Community. 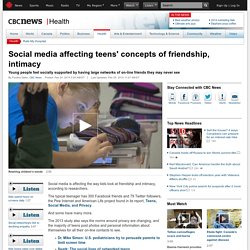 The typical teenager has 300 Facebook friends and 79 Twitter followers, the Pew Internet and American Life project found in its report, Teens, Social Media, and Privacy. And some have many more. The 2013 study also says the norms around privacy are changing, and the majority of teens post photos and personal information about themselves for all their on-line contacts to see. More recent survey data released last week by the Canadian non-profit digital literacy group MediaSmarts shows Canadian youth do take some steps to protect their privacy - for example, by not posting their contact information on social media.

Quebec won't remove animals from fur farm accused of cruelty - Montreal. Montreal's SPCA is accusing the Quebec government of not doing enough to protect dozens of foxes and hundreds of mink kept in inhumane conditions at a farm where they are being raised for their fur. 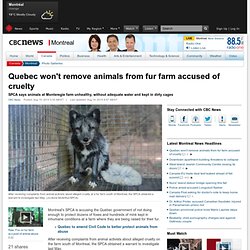 Quebec to amend Civil Code to better protect animals from abuse After receiving complaints from animal activists about alleged cruelty on the farm south of Montreal, the SPCA obtained a warrant to investigate last May. SPCA director of animal advocacy Alanna Devine says she was horrified when she arrived at the farm in Montérégie. “Animals not having access to adequate water, large amounts of excrement, filthy cages... the sort of things that would be outrageous if we saw dogs… wired bottom cages, no access to a solid floor,” said Devine. “Difficult things to see.” Government intervention. More Than 30,000 Elephants Are Killed Every Year. These Are The People Working To Save Them. Some Guys Poured Concrete Into An Ant Hill. The Result Is Friggin Insane. Killer whale pod rallies around orca trapped in fisherman's net. Here's One Of The Best Reasons Not To Hate Rats I've Ever Seen. Pig named Ernest Hamingway lives large in Whitehorse condo - North.

The story of an Alberta family's fight to keep their pot-bellied pig is hitting close to home for a Whitehorse family. 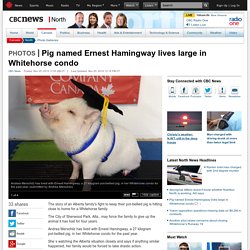 The City of Sherwood Park, Alta., may force the family to give up the animal it has had for four years. Andrea Merschilz has lived with Ernest Hamingway, a 27 kilogram pot-bellied pig, in her Whitehorse condo for the past year. She`s watching the Alberta situation closely and says if anything similar happened, her family would be forced to take drastic action. “We would move.” Manitoba wildlife centre discovers rescued crow can talk - Manitoba. A Manitoba wildlife centre has an unusual bird on its hands – a talking crow named Jet. 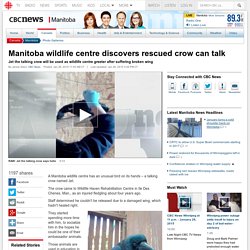 The crow came to Wildlife Haven Rehabilitation Centre in Ile Des Chenes, Man., as an injured fledgling about four years ago. Staff determined he couldn't be released due to a damaged wing, which hadn't healed right. Rabid wolf chases 2 Labrador families on snowmobile trip - Newfoundland & Labrador. Two families had a frightening run-in with a rabid wolf while snowmobiling in Labrador. 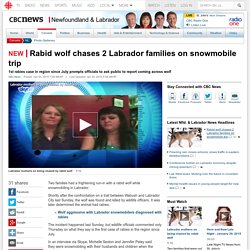 Shortly after the confrontation on a trail between Wabush and Labrador City last Sunday, the wolf was found and killed by wildlife officers. It was later determined the animal had rabies. South African lion kills U.S. tourist. A lion killed an American woman and injured a man driving through a private wildlife park in Johannesburg on Monday, a park official said. 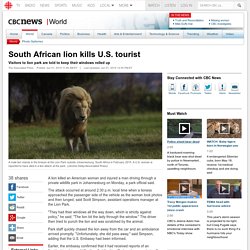 The attack occurred at around 2:30 p.m. local time when a lioness approached the passenger side of the vehicle as the woman took photos and then lunged, said Scott Simpson, assistant operations manager at the Lion Park. "They had their windows all the way down, which is strictly against policy," he said. "The lion bit the lady through the window. " The driver then tried to punch the lion and was scratched by the animal. Park staff quickly chased the lion away from the car and an ambulance arrived promptly. Earlier, the embassy confirmed that it had received reports of an "incident involving a U.S. citizen" at the Lion Park and was ready to offer "any assistance possible.

" The Lion Park is a popular destination for tourists who can drive in their own vehicles through large enclosures where lions roam freely. These tigers have never been swimming before. Here's how they reacted to their brand new pool. Siberian tigers Carli and Lily were living in a small, filthy cage when they were rescued by animal welfare officers. 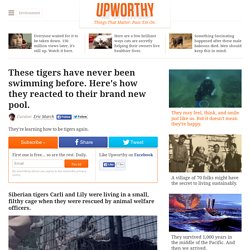 The International Fund for Animal Welfare explains they were taken to Safe Haven Rescue Zoo in Nevada, where sanctuary workers immediately began the long, difficult process of teaching them how to be tigers again after a lifetime of captivity and neglect. When the sanctuary employees realized Carli and Lily had never been swimming before, they built the tigers their own special pool. It was love at first sight. Like This Post On Facebook Even by conservative estimates, somewhere between 10,000 to 20,000 big cats are currently being kept as pets in the United States. 'Eaten Alive' by a Giant Anaconda Snake - Ανακόντα τρώει άνθρωπο. 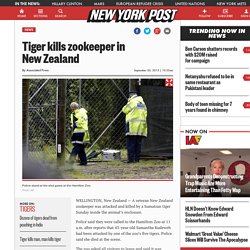 Police said they were called to the Hamilton Zoo at 11 a.m. after reports that 43-year-old Samantha Kudeweh had been attacked by one of the zoo’s five tigers. Police said she died at the scene. The zoo asked all visitors to leave and said it was closing its doors until Thursday. Authorities are investigating to determine exactly what happened. Modal Trigger Zoo visitor Adam Rich told The New Zealand Herald that he saw the tigers Sunday morning and noticed a female zookeeper opening up a gate to allow them access to an outdoor enclosure.

He said that about 45 minutes to an hour later, zoo staff approached him and asked him to leave. “They seemed a bit panicky,” Rich said.