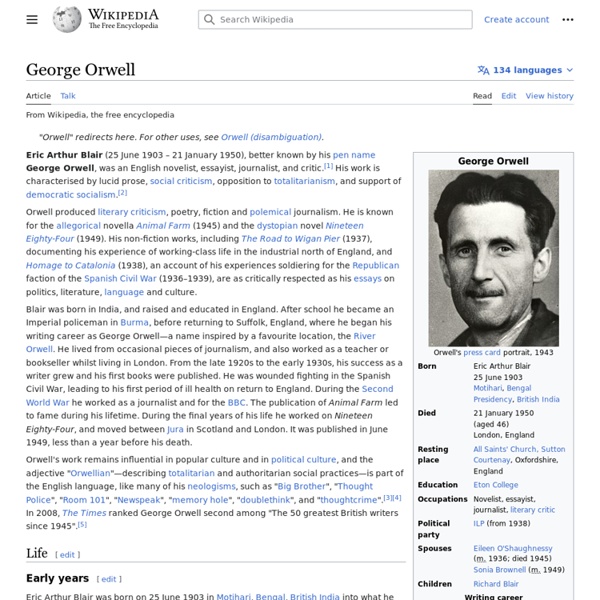 English author and journalist Eric Arthur Blair (25 June 1903 – 21 January 1950),[1] better known by his pen name George Orwell, was an English novelist, essayist, journalist and critic, whose work is marked by lucid prose, awareness of social injustice, opposition to totalitarianism, and outspoken support of democratic socialism.[2][3] Life Early years Blair family home at Shiplake, Oxfordshire Eric Arthur Blair was born on 25 June 1903 in Motihari, Bihar, British India.[7] His great-grandfather, Charles Blair, was a wealthy country gentleman in Dorset who married Lady Mary Fane, daughter of the Earl of Westmorland, and had income as an absentee landlord of plantations in Jamaica.[8] His grandfather, Thomas Richard Arthur Blair, was a clergyman.[9] Although the gentility passed down the generations, the prosperity did not; Eric Blair described his family as "lower-upper-middle class".[10] In 1904 Ida Blair settled with her children at Henley-on-Thames in Oxfordshire. Policing in Burma Statue

George Orwell George Orwell [pseudonym of Eric Arthur Blair] (1903-1950), journalist, political author and novelist wrote Animal Farm (1945) and Nineteen Eighty-Four (1949); “It was one of those pictures which are so contrived that the eyes follow you about when you move. BIG BROTHER IS WATCHING YOU, the caption beneath it ran.” Democratic socialism Democratic socialism is a political ideology advocating a democratic political system alongside a socialist economic system. This may refer to extending principles of democracy in the economy (such as through cooperatives or workplace democracy), or may simply refer to trends of socialism that emphasise democratic principles as inalienable from their political project. There is no exact definition of democratic socialism.

List of democratic socialist parties and organizations - Wikipedia From Wikipedia, the free encyclopedia This is a list of parties and organizations that are either explicitly democratic socialist or include significant numbers of democratic socialist members (although many do not specifically include the term "Democratic Socialist" in their name). List[edit] Animal Farm Themes Animal Farm is a satire of totalitarian governments in their many guises. But Orwell composed the book for a more specific purpose: to serve as a cautionary tale about Stalinism. It was for this reason that he faced such difficulty in getting the book published; by the time Animal Farm was ready to meet its readers, the Allies were cooperating with the Soviet Union. The allegorical characters of the novel represent specific historical figures and different factions of Imperial Russian and Soviet society.

Why Socialism? - Wikipedia "Why Socialism?"[1] is an article written by Albert Einstein in May 1949 that appeared in the first issue of the socialist journal Monthly Review.[2] Contents[edit] According to Einstein, the profit motive of a capitalist society, in conjunction with competition among capitalists, leads to unnecessary cycles of booms and depressions, and ultimately encourages selfishness instead of cooperation.[3] In addition, the educational system of such a society would be severely undermined because people will educate themselves only to advance their careers. What is the main theme in Animal Farm by George Orwell? The weakness of all Utopias is this, that they take the greatest difficulty of man and assume it to be overcome, and then give an elaborate account of the overcoming of the smaller ones. C. K. Chesterton, Heretics I think the above quote states pretty accurately what Orwell had in mind. Changing institutions does not change human nature, which is "the greatest difficulty of man."

Why Socialism? by Albert Einstein Albert Einstein is the world-famous physicist. This article was originally published in the first issue of Monthly Review (May 1949). It was subsequently published in May 1998 to commemorate the first issue of MR‘s fiftieth year. —The Editors Is it advisable for one who is not an expert on economic and social issues to express views on the subject of socialism?

Animal Farm: Major Themes Satire Satire is loosely defined as art that ridicules a specific topic in order to provoke readers into changing their opinion of it. By attacking what they see as human folly, satirists usually imply their own opinions on how the thing being attacked can be remedied. Yanis Varoufakis - Wikipedia Born in Athens in 1961, Varoufakis attended Moraitis School before moving to the United Kingdom, where he studied mathematics at the University of Essex, got a postgraduate degree in mathematical statistics at University of Birmingham, and a PhD in economics back at Essex. Whilst at university, he was a supporter of various political causes. Following university, he began a career in academic economics, teaching at the universities of Essex, East Anglia, and Cambridge between 1982 and 1988. Following Margaret Thatcher's third election victory in 1987, Varoufakis left the UK and moved to Australia, where he taught at the University of Sydney until 2000. He returned to Greece that year to teach at the University of Athens, where he led a doctoral program and was promoted to full professor in 2005. In January 2015, Varoufakis was appointed as the Minister of Finance, and led negotiation with Greece's creditors during the Greek government-debt crisis.

Animal Farm: Themes, Motifs & Symbols Themes Themes are the fundamental and often universal ideas explored in a literary work. The Corruption of Socialist Ideals in the Soviet Union Animal Farm is most famous in the West as a stinging critique of the history and rhetoric of the Russian Revolution. Retelling the story of the emergence and development of Soviet communism in the form of an animal fable, Animal Farm allegorizes the rise to power of the dictator Joseph Stalin. Karen people - Wikipedia Karen state in Myanmar The Karen, Kayin, Kariang or Yang people (Burmese: ကရင်လူမျိုး, pronounced: [kəjɪ̀ɴ lù mjó]; Per Ploan Poe or Ploan in Poe Karen and Pwa Ka Nyaw or Kanyaw in Sgaw Karen; Thai: กะเหรี่ยง or ยาง) refer to a number of individual Sino-Tibetan language speaking ethnic groups, many of which do not share a common language or culture. These Karen groups reside primarily in Karen State, southern and southeastern Myanmar. The Karen make up approximately 7 percent of the total Burmese population with approximately 5 million people.[6] A large number of Karen have migrated to Thailand, having settled mostly on the Thailand–Myanmar border. The Karen groups as a whole are often confused with the Padaung tribe, best known for the neck rings worn by their women, but they are just one sub-group of Red Karens (Karenni), one of the tribes of Kayah in Kayah State, Myanmar. Karen boy with traditional costume for Karen New Year

The People of the Abyss - Wikipedia The People of the Abyss (1903) is a book by Jack London about life in the East End of London in 1902. He wrote this first-hand account after living in the East End (including the Whitechapel District) for several months, sometimes staying in workhouses or sleeping on the streets. The conditions he experienced and wrote about were the same as those endured by an estimated 500,000 of the contemporary London poor. Antecedents and successors[edit]