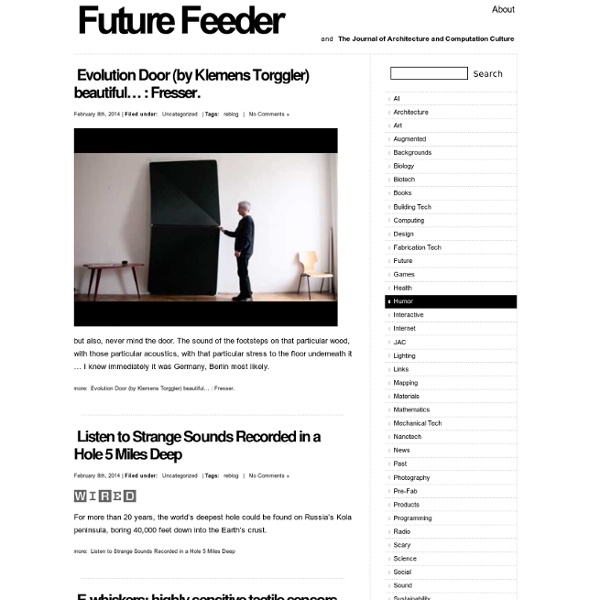 we make money not art Subtopia: The Automated Border If you’ve been reading Subtopia for the last year now you’d know that one aspect of urban militarization we’ve been paying close attention to is the evolution of the border fence. It seems in the last year alone several key features have emerged bringing some security planners’ defensive wet dreams that much closer to fruition. [Image: From a U.S. Border Patrol Remote Surveillance camera, in this research piece called VideoAutomated Video Security put together by the Southwest Research Institute.] [Image: The Mini-Samson RCWS developed by developed by Israel Armament Development Authority Rafael and the IDF, via Israeli-weapons.com.] Well, recently there have been reports of the Israeli Defense Forces starting to deploy “robotic snipers” along the border with Gaza. [Image: South Korea is deploying Samsung's SGR-A1 "Intelligent Surveillance & Security Guard Robot" at key installations and along its border.

DesignVerb! design blog Strangeharvest :: Architecture / Design / Culture Daily Icon Social Design Notes: Design + Activism From an interview with Molly Crabapple: “Art can change the world, but seldom in the way it intends, and seldom the art that people think would have that effect. I keep thinking of the Guy Fawkes mask Dave Gibbons drew. In discussions of what art is radical, mainstream comics are seldom brought up. 28 January 2014 | LINK How The Sex Pistols saved Christmas: For the families of the striking fire fighters, Christmas 1977 was going to be a difficult one. 26 December 2013 | LINK In 2008, Erica Chenoweth published a study comparing 323 violent and non-violent civil resistance campaigns between 1900 and 2006. Non-violent campaigns worldwide were twice as likely to succeed as violent insurgencies. Erica presented her research at TEDxBoulder last month: She's also posted an FAQ and a transcript of her talk along with links and footnotes. The arts community is missing a great chance to push ballet initiatives today in NYC. Heard about that big corporate settlement for defrauding the public?