7 billion people and you: What's your number? 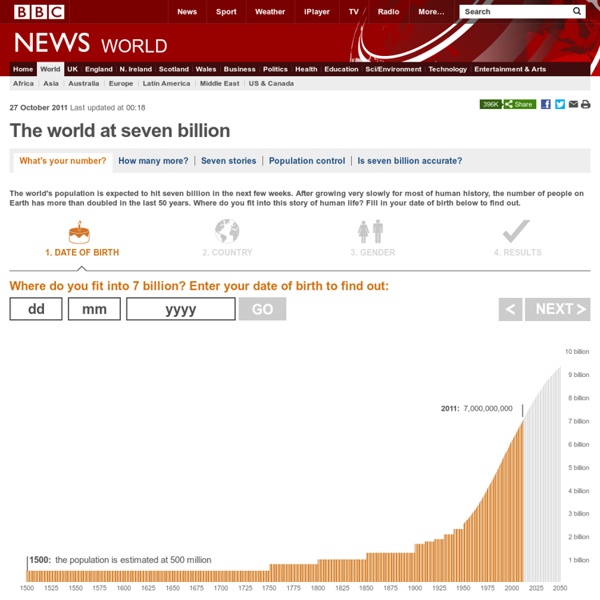 Sources: All population data are based on estimates by the UN Population Division and all calculations provided by the UN Population Fund. The remaining data are from other sections of the UN, the Global Footprint Network and the International Telecommunications Union. Want to find out more? Visit the UN Population Fund's detailed population calculator, 7 billion and me. Notes on the data: Only birth dates after 1910 can be accommodated and only countries with populations of more than 100,000 people are included. Three country groupings - developed, developing and least developed - featured in the conclusions are those referenced by the UN for assessing the Millennium Development Goals. Read the answers to frequently asked questions here.

Why Finland loves saunas Image copyright Getty Images The only Finnish word to make it into everyday English is "sauna". But what it is, and how much it means to Finns, is often misunderstood - and it's definitely not about flirtation or sex. In a dimly lit wood-panelled room, naked men sit in silence, sweating. One beats himself repeatedly with birch branches. Another stands, takes a ladle of water and carefully pours it over the heated stones of the stove in the corner.

Interactive - NatGeoMag Population The World of Seven Billion The map shows population density; the brightest points are the highest densities. Each country is colored according to its average annual gross national income per capita, using categories established by the World Bank (see key below). Some nations— like economic powerhouses China and India—have an especially wide range of incomes. But as the two most populous countries, both are lower middle class when income is averaged per capita.

Experimental Cartography: The Map as Art by Maria Popova What tattoo art has to do with fashion, vintage atlases and Nazi concentration camps. We’ve always been fascinated by maps — through various elements of design, from typography to color theory to data visualization, they brilliantly condense and capture complex notions about space, scale, topography, politics and more. BOINC malariacontrol - Linguistic Team International Wiki From Linguistic Team International Wiki Return to BOINC Project Gateway The Project! The malariacontrol.net project is an application that makes use of network computing for stochastic modelling of the clinical epidemiology and natural history of Plasmodium falciparum malaria. Best of Fails Best of Fails Best of the Best, part 2 read more... Beauty Comes in All Sizes Beauty can be so different! read more...

Map: How much holiday you get depends on where you live Easter may be approaching, but for most people that doesn’t mean a long holiday, and for many it doesn’t even mean a long weekend. But as this colourful map shows, if you’re in the UK you should probably be thankful for the amount of holiday you are legally entitled to. There are lots of caveats, as the map doesn’t include national holidays, specific allowances for factory workers in India and Pakistan for example, or additional entitlements based on years worked. More: 19 maps from which we’ll let you draw your own conclusions Timeline of Major Events & Trends on Datavisualization Peter von Stackelberg designed this complex timeline of social, technological, economic and political events and trends from 1750 to 2100. Each time series shows graphs, events and categories on a common scale. The purpose of the timeline is to provide a visual tool for looking at events across a relatively long period of time and identify patterns and interrelationships involving a broad range of factors. Identification of patterns is particularly important when attempting to look at the future of complex social, technological, economic, and other systems. Some thoughts behind the design process.Stephen Lark uploaded a zoomable version to Zoomorama

Bunny Jenny Jenny Bunny is the nickname of Jenny Woods, a young American photographer of 19 years. She lives in Clewiston, Florida. So young and already so talented, she photographs young women in the nature around them. Her fashion photos are fresh, in the wild or rock’n'roll. Already a very nice portfolio for a girl in her age. VirtualNES.com Click a letter above to open the games menu! Hundreds of vintage Nintendo Entertainment System games are available here on VirtualNES.com, most of which you can access using the alphabar above this paragraph. Just click a letter, and you'll magically be taken away to a list of NES games that happen to start with that letter. However, there are some special games, such as unlicensed games, that we maintain separate lists for. Look below, and you'll find all sorts of excellent games, from unreleased games that were left unfinished, unlicensed games from enterprising developers who don't want to pay Nintendo for a license, and excellent homebrew games made by people who love video games so much, they decided to make a game themselves. As you probably know, we can only bring you games that we have the original cartridge of, which is why we depend on the support of Players Like You™ to help us create a large library of games for everyone around the world to enjoy.

Caffiene Addicts Cartoons and Comics Caffiene Addicts cartoon 1 of 7 "Well, no wonder they're more producive than us." Caffiene Addicts cartoon 2 of 7 'Excuse me, but do you have a decaffeinated baristo?' Caffiene Addicts cartoon 3 of 7 'In future meetings, let's serve only decaffeinated coffee, Ms Williams.' How the language you speak changes your view of the world - Science - News Bilinguals get all the perks. Better job prospects, a cognitive boost and even protection against dementia. Now new research shows that they can also view the world in different ways depending on the specific language they are operating in. The past 15 years have witnessed an overwhelming amount of research on the bilingual mind, with the majority of the evidence pointing to the tangible advantages of using more than one language. Going back and forth between languages appears to be a kind of brain training, pushing your brain to be flexible. Just as regular exercise gives your body some biological benefits, mentally controlling two or more languages gives your brain cognitive benefits.