UN ordered depopulation of 3 billion people by food malnutrition has started – PBSpecial Report. Posted by PCSpecial Report Monday, December 13th, 2010 While investigating the WHO and UN role in the biological weapons attack called the A-H1N1 (Swine Flu) pandemic of 2009, criminal intelligence (CI) agents from Canada and the US have stumbled upon a covert and sinister plan to kill off as many as 3 billion people by food malnutrition. 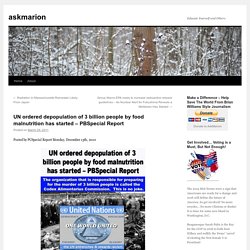 The organization that is responsible for preparing for the murder of 3 billion people is called the Codex Alimentarius Commission. It was established in 1963 by the World Health Organization and the Food and Agriculture Organization of the United Nations. Their officially stated purpose is to develop international food standards to protect consumer health and to facilitate fair trading practices in foods. Today, there are 181 member governments including Canada. US Air Force weapon of mass destruction military installation called HAARP –> unfortunately the live cam image from November 29, 2010. is no longer available. Source: Short URL: Related: What If? Are we being poisoned?! Don't give them a choice! (Wake Up! Message) Depopulation by Food While Making Profit. By Shenali Waduge June 08, 2012 from AsianTribune Website Two goals have been set into motion. 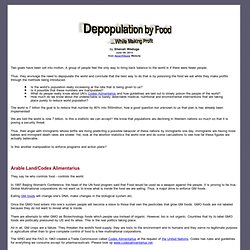 From 7 Billion People To 500 Million People – The Sick Population Control Agenda Of The Global Elite. The United Nations has officially designated October 31st as 7 Billion Day. 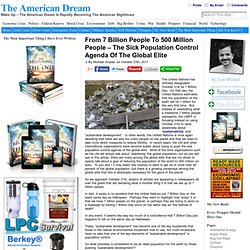 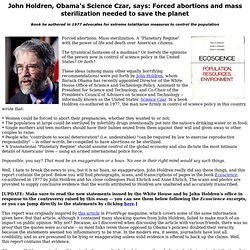 Impossible, you say? Well, I hate to break the news to you, but it is no hoax, no exaggeration. This report was originally inspired by this article in FrontPage magazine, which covers some of the same information given here. Ready? Why? 1. 1. Depopulation — 247newsworld. Plans To Depopulate The Earth 80% For Future Man's Survival. Depopulation: One billion is enough! ________________ By Benjamin Seiler On a hilltop in Elbert County in the US state of Georgia stands a huge granite monument built in March 1980. 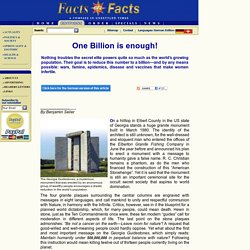 The identity of the architect is still unknown, for the well-dressed and eloquent man who entered the offices of the Elberton Granite Fishing Company in June the year before and announced his plan to erect a monument with a message to humanity gave a false name. R. C. Christian remains a phantom, as do the men who financed the construction of this “American Stonehenge”. The four granite plaques surrounding the central columns are engraved with messages in eight languages, and call mankind to unity and respectful communion with Nature, in harmony with the Infinite.

Mankind—No More Than a Pox and a Commodity. Peter Gleick: Population Dynamics Key to Sustainable Water Solutions. As world population passes seven billion, there is substantial pressure on natural resources. 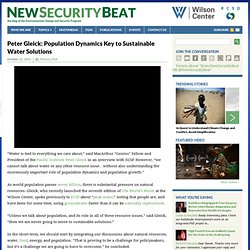 Gleick, who recently launched the seventh edition of The World’s Water at the Wilson Center, spoke previously to ECSP about “peak water,” noting that people are, and have been for some time, using groundwater faster than it can be naturally replenished. “Unless we talk about population, and its role in all of these resource issues,” said Gleick, “then we are never going to move to sustainable solutions.” In the short-term, we should start by integrating our discussions about natural resources, water, food, energy, and population. “That is proving to be a challenge for policymakers, but it’s a challenge we are going to have to overcome,” he concluded. The Hundred-Year Lie: How Food and Medicine are Destroying Your Health. Interview with Randall Fitzgerald, author of The Hundred-Year Lie, on the prevalence of toxic chemicals. Mike: I am joined today by author Randall Fitzgerald, the author of "The Hundred-Year Lie: How Food and Medicine are Destroying Your Health," a groundbreaking new book that you would do well to pick up and read. 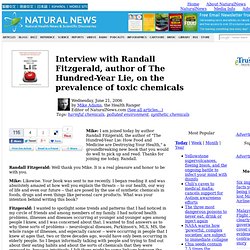 Thanks for joining me today, Randall. Randall Fitzgerald: Well thank you Mike. It is a real pleasure and honor to be with you. Mike: Likewise. Your book was sent to me recently.