James Howard Kunstler: The ghastly tragedy of the suburbs. The Beginning of the Universe and the Limit of Knowledge. 125 Great Science Videos: From Astronomy to Physics & Psychology. Astronomy & Space Travel A Brief, Wondrous Tour of Earth (From Outer Space) – Video – Recorded from August to October, 2011 at the International Space Station, this HD footage offers a brilliant tour of our planet and stunning views of the aurora borealis.A Universe from Nothing – Video – In 53 minutes, theoretical physicist Lawrence Krauss answers some big enchilada questions, including how the universe came from nothing.A Year of the Moon in 2.5 Minutes – Video – The Lunar Reconnaissance Orbiter has been orbiting the moon for over a year. 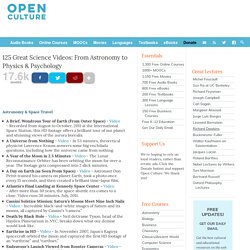 The footage gets compressed into 2 slick minutes.A Day on Earth (as Seen From Space) – Video – Astronaut Don Pettit trained his camera on planet Earth, took a photo once every 15 seconds, and then created a brilliant time-lapse film.Atlantis’s Final Landing at Kennedy Space Center – Video – After more than 30 years, the space shuttle era comes to a close. Video runs 30 minutes. Physics Biology & Chemistry. Eliezer Yudkowsky on Bayes and science: what? What is Chaos? An Interactive Online Course for Everyone. Physicists Discover Geometry Underlying Particle Physics. Physicists have discovered a jewel-like geometric object that dramatically simplifies calculations of particle interactions and challenges the notion that space and time are fundamental components of reality. 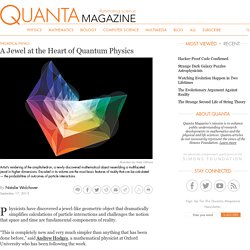 Expanding Our Horizons: Matter, Space, and the Universe. The Fermi Paradox - Wait But Why. Google. Too much Technology? We love technology at RedShark. 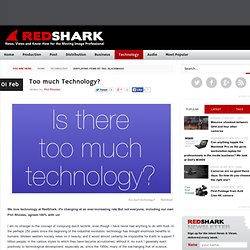 It's changing at an ever-increasing rate But not everyone, including our own Phil Rhodes, agrees 100% with us! Green Builder Media Blogs - GreenBuilder. It’s disheartening that climate change remains a politically charged issue, particularly since its consequences affect everyone, everywhere, in all geographies and walks of life. 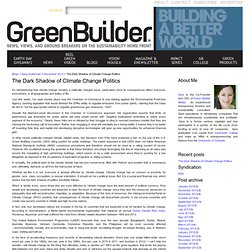 Just this week, I’ve seen stories about how the Chamber of Commerce is now lobbing against the Environmental Protection Agency, backing legislation that would diminish the EPA’s ability to regulate emissions from power plants, claiming that the Clean Air Act is “not the appropriate vehicle to regulate greenhouse gas emissions.” Huh? The New World After Oil, Cars and Suburbs. Eric W. 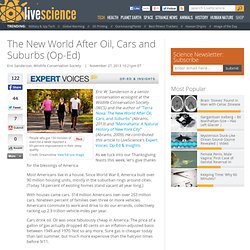 Sanderson is a senior conservation ecologist at the Wildlife Conservation Society (WCS) and the author of "Terra Nova: The New World After Oil, Cars, and Suburbs" (Abrams, 2013) and "Mannahatta: A Natural History of New York City" (Abrams, 2009). He contributed this article to LiveScience's Expert Voices: Op-Ed & Insights. As we tuck into our Thanksgiving feasts this week, let's give thanks for the blessings of America. Most Americans live in a house. Since World War II, America built over 90 million housing units, mostly in the suburban rings around cities. 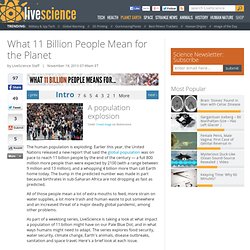 The human population is exploding. Earlier this year, the United Nations released a new report that said the global population was on pace to reach 11 billion people by the end of the century — a full 800 million more people than were expected by 2100 (with a range between 9 million and 13 million), and a whopping 4 billion more than call Earth home today.

Nanotechnology. Just give me the FAQ The next few paragraphs provide a brief introduction to the core concepts of nanotechnology, followed by links to further reading. 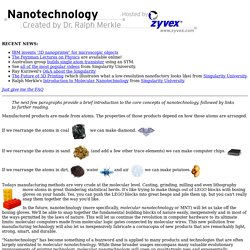 Manufactured products are made from atoms. Material Remains: The Perpetual Challenge of Garbage. Editor’s note: The following is the introduction to a special e-publication called Conquering Garbage (click the link to see a table of contents). 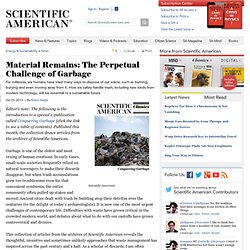 Published this month, the collection draws articles from the archives of Scientific American. Garbage is one of the oldest and most vexing of human creations. In early times, small-scale societies frequently relied on natural scavengers to make their discards disappear, but when trash accumulations grew too troublesome even for that convenient symbiosis, the entire community often pulled up stakes and moved. Fossil Fuel Use Continues to Rise. Despite concerted global efforts to reduce carbon emissions through the expansion of clean and renewable energy resources, fossil fuels continued to dominate the global energy sector in 2012, according to new figures released yesterday by the Worldwatch Institute. 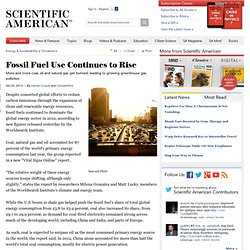 Coal, natural gas and oil accounted for 87 percent of the world's primary energy consumption last year, the group reported in a new "Vital Signs Online" report. "The relative weight of these energy sources keeps shifting, although only slightly," states the report by researchers Milena Gonzalez and Matt Lucky, members of the Worldwatch Institute's climate and energy team. While the U.S. boom in shale gas helped push the fossil fuel's share of total global energy consumption from 23.8 to 23.9 percent, coal also increased its share, from 29.7 to 29.9 percent, as demand for coal-fired electricity remained strong across much of the developing world, including China and India, and parts of Europe.

Short-Term Gratification Proves an Obstacle to Climate Change Progress. When nations that were parties to the Montreal Protocol agreed to completely end the production of ozone-depleting substances by 1992, the agreement led to the restoration of the ozone layer, which acts as a shield to protect all life from the sun's harmful radiation. Awareness and cooperation were vital to this accomplishment, says a new study examining human behavior and saying that these elements will be crucial to upcoming international negotiations toward mitigating climate change. The Montreal Protocol is a promising example, said Jennifer Jacquet, a clinical assistant professor in New York University's Environmental Studies Program and the lead author of the study, recently published in Nature Climate Change. 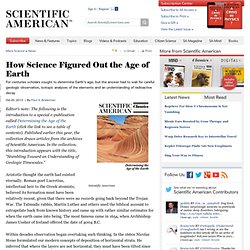 Published earlier this year, the collection draws articles from the archives of Scientific American. In the collection, this introduction appears with the title, “Stumbling Toward an Understanding of Geologic Timescales.” Aristotle thought the earth had existed eternally. Roman poet Lucretius, intellectual heir to the Greek atomists, believed its formation must have been relatively recent, given that there were no records going back beyond the Trojan War. The Talmudic rabbis, Martin Luther and others used the biblical account to extrapolate back from known history and came up with rather similar estimates for when the earth came into being.

Within decades observation began overtaking such thinking. Oh, the Humanity: Is the Threat of Overpopulation Still a Big Deal? Pressure for Results Mounts as Fusion Research Crawls Forward. Opinion: We don't need another billion people. A Move Is Afoot to Keep Climate Science Out of Classrooms. Dr. Michio Kaku on Why Physics Ends the Free Will Debate. Human Populations. Population Growth over Human History. A Cooler Pacific May Be Behind Recent Pause In Global Warming. Fish Farms Cause Rapid Local Sea-Level Rise. As Asia Bakes, Scientists Predict Extreme Heat May Become the Norm. As the heat wave in East Asia drags on, hospitalizing thousands in Japan and straining power resources in South Korea, a new study by European climate researchers predicts that today's unusually high temperatures may become tomorrow's normal summer weather for many regions across the globe. Published today in the journal Environmental Research Letters, the paper projects that heat waves will become far more common by 2040, even if humans manage to drastically reduce carbon dioxide emissions before then.

Image credit: José Manuel Suárez/Flickr As we have been hearing, global water shortages are poised to exacerbate regional conflict and hobble economic growth. Yet the problem is growing worse, and is threatening to deal devastating blows to health, according to top water officials from the U.S. State Department and the U.S. How to Survive a Climate Catastrophe.