Money, Gift and Society in the Age of Transition. 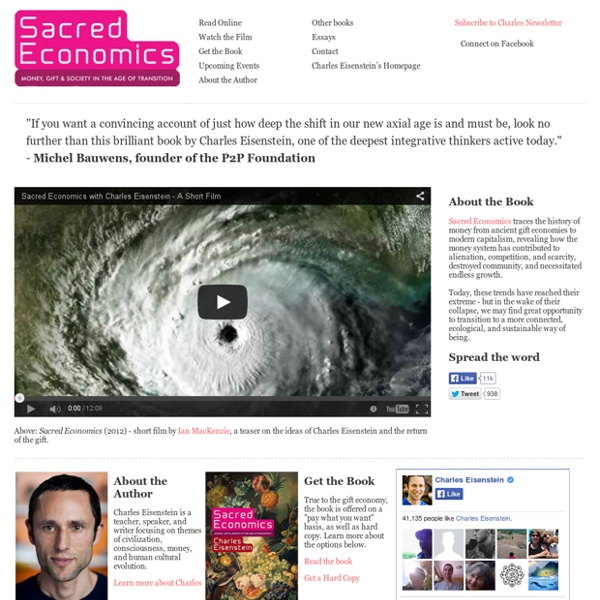 "If you want a convincing account of just how deep the shift in our new axial age is and must be, look no further than this brilliant book by Charles Eisenstein, one of the deepest integrative thinkers active today." - Michel Bauwens, founder of the P2P Foundation Above: Sacred Economics (2012) - short film by Ian MacKenzie, a teaser on the ideas of Charles Eisenstein and the return of the gift. About the Book Sacred Economics traces the history of money from ancient gift economies to modern capitalism, revealing how the money system has contributed to alienation, competition, and scarcity, destroyed community, and necessitated endless growth. Today, these trends have reached their extreme - but in the wake of their collapse, we may find great opportunity to transition to a more connected, ecological, and sustainable way of being. Spread the word

Why I Don’t Believe Randers’ Limits to Growth Forecast to 2052 Jorgen Randers published a book in 2012 called 2052: A Global Forecast for the Next 40 Years. A note on the front says, “A report to the Club of Rome, Commemorating the 40th Anniversary of The Limits to Growth.” If we compare the new book to the book from 40 years ago, we see some surprising differences. In 1972, the analysis suggested that serious resource depletion issues would occur about now–the first part of the 21st century. In comparison, current indications look much better. According to Randers’ current analysis, world GDP growth will continue to rise through 2050, and energy consumption will continue to grow until 2040.

Climate Change And Air Pollution Could Join Forces To Make The World Even Hungrier Over the next 40 years, drought, erosion, and longer growing seasons brought on by climate change will radically alter the way food is produced all over the world. But until now, climate predictions failed to consider another factor in the future of key crops: Air pollution. A new study from researchers at MIT and Colorado State University published in Nature Climate Change shows that ground-level ozone could exacerbate the effects of climate change on staple food crops like wheat, soybeans, maize, and rice. If global industry and governance fail to reduce emissions, researchers predict that crop production could dwindle by as much as 15%.

The end of capitalism has begun The red flags and marching songs of Syriza during the Greek crisis, plus the expectation that the banks would be nationalised, revived briefly a 20th-century dream: the forced destruction of the market from above. For much of the 20th century this was how the left conceived the first stage of an economy beyond capitalism. The force would be applied by the working class, either at the ballot box or on the barricades. The lever would be the state. The opportunity would come through frequent episodes of economic collapse. Doomstead Diner Off the keyboard of Gail Tverberg Follow us on Twitter @doomstead666 Friend us on Facebook Published on Our Finite World on August 26, 2015

Global Energy Projections for 2040 EmailShare 25EmailShare Meeting Future Energy Needs. Courtesy General Electic. Will Your Job Be Done By A Machine? : Planet Money Machines can do some surprising things. But what you really want to know is this: Will your job be around in the future? We have the "definitive" guide. According To A Nasa Funded Study, We're Pretty Much Screwed Our industrial civilization faces the same threats of collapse that earlier versions such as the Mayans experienced, a study to be published in Ecological Economics has warned. The idea is far from new, but the authors have put new rigor to the study of how so many previous societies collapsed, and why ours could follow. Lead author Mr Safa Motesharrei is no wild-eyed conspiracy theorist. Motesharrei is a graduate student in mathematics at the National Socio-Environmental Synthesis Center, a National Science Foundation-supported institution, and the research was done with funding from NASA's Goddard Space Flight Center.

I Had No Idea That THIS Could Cause Back Pain, But Now My Whole Life Has Changed! Life can sometimes be an emotional roller coaster. Some days you’re up and some days you’re down. But I was shocked to discover that the emotions you feel and the thoughts you think can have a direct impact on your physical health. According to Dr. Susanne Babbel, a psychologist specializing in trauma and depression writes in Psychology Today, “Studies have shown that chronic pain might not only be caused by physical injury but also by stress and emotional issues.” Debt Rattle September 1 2015 Jack Delano Colored drivers entrance, U.S. 1, NY Avenue, Washington, DC Jun 1940 Merkel: egg on her face and blood on her hands. • European Efforts to Stem Migrant Tide Sow Chaos on Austria-Hungary Border (WSJ) Austrian and Hungarian efforts to stem a growing tide of migrants sowed chaos along their frontier on Monday as Germany’s chancellor warned that Europe’s open-border policy was in danger unless it united in its response to the crisis. In Austria, police toughened controls on the border, triggering miles of traffic jams as they checked cars and trucks for evidence of people smuggling. They said they were compelled to conduct the highway searches after discovering the decomposed bodies of 71 people, most of them believed to be Syrian refugees, in an abandoned truck last week.

Artificial photosynthesis breakthrough turns CO2 emissions into plastics and biofuel Scientists at the Lawrence Berkeley National Laboratory and the University of California, Berkeley have created a hybrid system of bacteria and semiconducting nanowires that mimics photosynthesis. According to the researchers, their versatile, high-yield system can take water, sunlight and carbon dioxide and turn them into the building blocks of biodegradable plastics, pharmaceutical drugs and even biofuel. Although renewable energy is making up a growing portion of the world’s energy production, scientists have suggested that the current trends of CO2 buildup in our atmosphere are still likely to lead to serious consequences, and do so sooner than we had anticipated. One way to keep harmful emissions under control could be to trap the CO2 coming out of smokestacks using materials like polymers or sponges.

Chapter 9 – The Vatican Rules the World The Vatican Rules the World: The Rothschild Connection For anyone not to believe that this 2,000 year old body with vast holdings in gold, art, real estate, multinational corporations and most importantly, knowledge, is not the most powerful institution in the world, cannot be thinking straight. The following article sheds light on the power of the Vatican, and the influential rankings of the Rothschild family and the Windsor queen. You should be aware that the current head of the Rothschild dynasty is Baron David Rene James de Rothschild.