Dan Gilbert asks, Why are we happy? 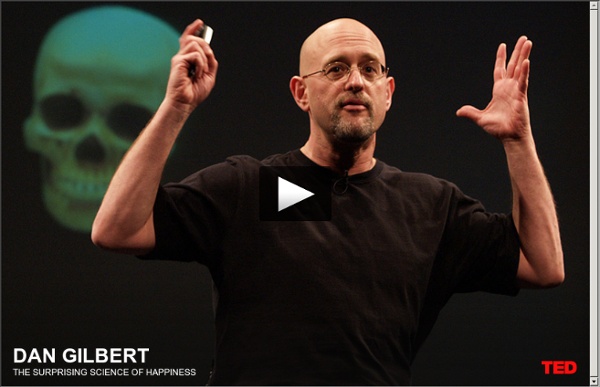 To predict what will make you happy, ask a stranger rather than guessing yourself Want to know how much you’d enjoy an experience? You’re better off asking someone who has been through it, even if they’re a complete stranger, than to find out information for yourself. This advice comes from Daniel Gilbert from Harvard University, who espoused it in his superb book Stumbling on Happiness. Now, he has found new support for the idea by studying speed-daters and people receiving feedback from their peers. In the first study, he found that female students were better able to predict how much they would enjoy a speed-date if they listened to the experiences of strangers than if they make their own assessments based on available information.

The 10 Best TED Talks of 2011 Watching videos online is usually considered fun, but generally a waste of time. Not so with TED videos, which are uniformly interesting, educational, inspiring, and enjoyable. If you haven't spent much time (or any) checking out TED videos, you should – and to help with that, I've compiled what seem to be the very best 10 TED videos of 2011. It was a grueling task, combing through the cream of the crop on the TED site, but somebody had to do it.

Top 10 Thinking Traps Exposed Our minds set up many traps for us. Unless we’re aware of them, these traps can seriously hinder our ability to think rationally, leading us to bad reasoning and making stupid decisions. Features of our minds that are meant to help us may, eventually, get us into trouble. Here are the first 5 of the most harmful of these traps and how to avoid each one of them. 1. The Anchoring Trap: Over-Relying on First Thoughts Sonja Lyubomirsky Sonja Lyubomirsky is a professor in the Department of Psychology at the University of California, Riverside and author of The How of Happiness, a book of strategies backed by scientific research that can be used to increase happiness.[1] She is often quoted in news articles about positive psychology and happiness.[2][3][4] In the book The Only Self-Help Book You'll Ever Need, a criticism of self-help books, Lyubomirsky's The How of Happiness is praised as a self-help book that has claims backed by empirical data.[5] Lyubomirsky is also an associate editor of the Journal of Positive Psychology. The How of Happiness[edit] Breakdown of sources of happiness, according to The How of Happiness

Hedgehog's dilemma Both Arthur Schopenhauer and Sigmund Freud have used this situation to describe what they feel is the state of individual in relation to others in society. The hedgehog's dilemma suggests that despite goodwill, human intimacy cannot occur without substantial mutual harm, and what results is cautious behavior and weak relationships. With the hedgehog's dilemma, one is recommended to use moderation in affairs with others both because of self-interest, as well as out of consideration for others. The hedgehog's dilemma is used to explain introversion and isolationism.

many of whom take a moral high ground 2009 may well be remembered for its scandal-ridden headlines, from admissions of extramarital affairs by governors and senators, to corporate executives flying private jets while cutting employee benefits, and most recently, to a mysterious early morning car crash in Florida. The past year has been marked by a series of moral transgressions by powerful figures in political, business and celebrity circles. New research from the Kellogg School of Management at Northwestern University explores why powerful people - many of whom take a moral high ground - don't practice what they preach.

Does the comfort of conformity ease thoughts of death? - life - 25 February 2011 AS THE light at the end of the tunnel approaches, the need to belong to a group and be near loved ones may be among your final thoughts. So say Markus Quirin and his colleagues at the University of Osnabrück in Germany. The team prompted thoughts of death in 17 young men with an average age of 23 by asking them whether they agreed or disagreed with a series of statements such as "I am afraid of dying a painful death". 10 Brilliant Social Psychology Studies Ten of the most influential social psychology experiments. “I have been primarily interested in how and why ordinary people do unusual things, things that seem alien to their natures.Why do good people sometimes act evil?Why do smart people sometimes do dumb or irrational things?” –Philip Zimbardo Like eminent social psychologist Professor Philip Zimbardo (author of The Lucifer Effect: Understanding How Good People Turn Evil), I’m also obsessed with why we do dumb or irrational things. The answer quite often is because of other people – something social psychologists have comprehensively shown.