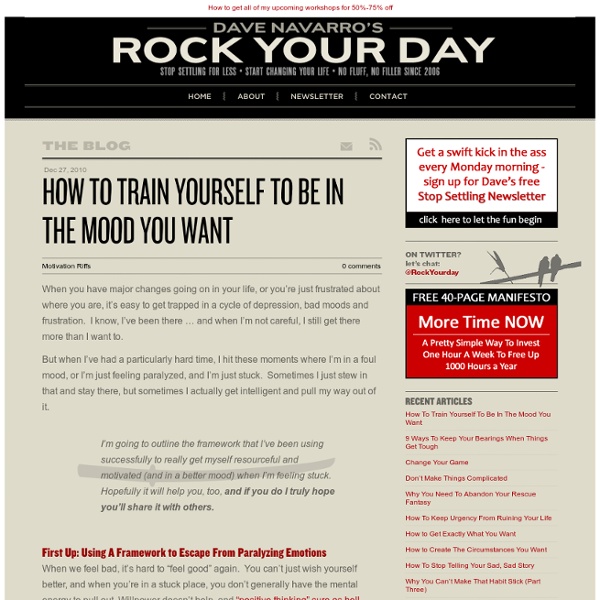 Dec 27, 2010 When you have major changes going on in your life, or you’re just frustrated about where you are, it’s easy to get trapped in a cycle of depression, bad moods and frustration. I know, I’ve been there … and when I’m not careful, I still get there more than I want to. But when I’ve had a particularly hard time, I hit these moments where I’m in a foul mood, or I’m just feeling paralyzed, and I’m just stuck. Sometimes I just stew in that and stay there, but sometimes I actually get intelligent and pull my way out of it. I’m going to outline the framework that I’ve been using successfully to really get myself resourceful and motivated (and in a better mood) when I’m feeling stuck. First Up: Using A Framework to Escape From Paralyzing Emotions When we feel bad, it’s hard to “feel good” again. The reason for this is that steps take the emotion out of our situation and give us direction to simply act. A: AGREE With Yourself That You Don’t Want To Be In This Mood Right Now. Dave

7 stupid thinking errors you probably make The brain isn’t a flawless piece of machinery. Although it is powerful and comes in an easy to carry container, it has it’s weaknesses. A field in psychology which studies these errors, known as biases. Although you can’t upgrade your mental hardware, noticing these biases can clue you into possible mistakes.How Bias Hurts You If you were in a canoe, you’d probably want to know about any holes in the boat before you start paddling. Who invented mind mapping I've seen comments around the web that say that Tony Buzan didn't invent mind mapping. What he did, they say, was to take a quite well-known technique (going back many hundreds of years according to some sources), narrowed it down with his ten rules and 'invented' a name, which he then trademarked (but see below for more about the mark). He then marketed this very successfully through BBC programmes (which is where I first encountered it in the 1970s), books and lecture tours. I had heard of and used spider diagrams long before that, though.

How to hack the beliefs that are holding you back We all have beliefs that are holding us back. Sometimes we're aware of them, sometimes not. One entrepreneur I know, who shall remain nameless, admitted (after quite a lot of wine) that he has a block around sending invoices. He was perhaps exaggerating when he said that before he could send an invoice he had to down a bottle of wine and get drunk so he could hit the send button, but even so, it was clear that he had a serious block around asking people to pay him. As an entrepreneur, that's obviously a deadly flaw. In terms of "holding you back", struggling to ask people for money for work that you've done is like wearing blocks of cement as boots.

6 Random Things (Other Than Drugs) That Reduce Pain Your nearest drugstore is full of completely fake pain remedies, from shoe magnets to magical ground-up shark bones. But while these new age medicines are little more than placebos, science has found a whole lot of unexpected -- and downright weird -- ways you can control pain without ever swallowing a pill. Things like ... There is more to life than money. Money is the root of all evil.

Alice Madness Returns : American McGee's Alice 2 Eleven years ago a horrific fire took Alice's family from her and left her mind horrifically scarred. Afterwards she was confined to Rutledge Asylum, where she struggled to confront her demons by slipping further into her fantasy world of Wonderland. Now, after ten years, she has finally secured her release—yet she still bears the heavy psychological burden of that tragic event. With her mind in tatters, she is unable to resolve the fear prompted by her strange memories, dreams, and visions. Perhaps she'll do better in Wonderland.

How I Use Mindmapping to Write I use lots of tools for writing. The other day, I talked about the importance of writing practice. Today, as I’m working on a new speech, I wanted to share another tool I use: mind mapping. Before you ask, because the technology minded of you often do, this particular mindmapping software is called Mind Node and it’s for Mac. There are plenty of tools for Windows and some that operate online. Most lives are lived by default Jamie lives in a large city in the midwest. He’s a copywriter for an advertising firm, and he’s good at it. He’s also good at thinking of reasons why he ought to be happy with his life. He has health insurance, and now savings. Personality Disorder Test - Personality Test This test, sponsored by 4degreez.com, is meant to help determine whether or not you have a personality disorder. It is not meant to be used as a diagnostic tool, but rather as a tool to give you insight into a potential disorder that may be having a negative impact on your life. If you believe you may be suffering from a personality disorder or any other disorder, you should ask your family doctor to recommend a therapist in your area to meet with.

5 crazy new trying-to-conceive tricks It has been three years since we, um, did the deed that created Carter. Neither one of my pregnancies “just happened” (I was always envious of those who could say that), but they weren’t as difficult to conceive as some of the gals over on the TTC board. For us, getting pregnant involved daily temperature taking and charting — where’s the frickin’ thermometer honey? I can’t MOVE until I take my temperature! — but once we had the pattern established and knew “the right time,” pregnancy happened fairly quickly. We also practiced the “legs in the air” trick, whereby I stayed still with my legs up for 20 min. after sex. 42 Practical Ways To Improve Yourself Are you someone who likes to grow? Do you constantly seek to improve yourself and become better? If you do, then we have something in common.