We Feel Fine / by Jonathan Harris and Sep Kamvar 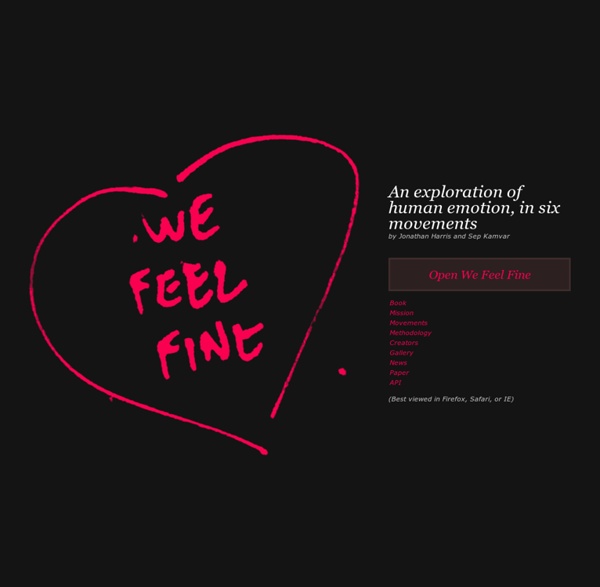 We Feel Fine / Movements Movements We Feel Fine is divided into six discrete movements, each illuminating a different aspect of the chosen population. These movements are represented in the We Feel Fine applet. To navigate between movements in the applet, the viewer should scroll over the heart at the bottom left corner of the applet and click on the desired movement. Madness, the first movement, opens with a wildly swarming mass of around 1,500 particles, emanating from the center of the screen and then careening outwards, bouncing off walls and reacting to the behavior of the mouse.

Critical Mass and Your Social Media Strategy Part I Tipping the Scale If ever I needed a reminder about what really matters to advertisers, I got it earlier this month at the tech-media-gadget-advertising-palooza otherwise known as CES in Las Vegas. Simply put, in the 30+ meetings Microsoft Advertising held with... Microsoft, Warner Bros. UK Launch First Ad Campaign Featuring 3D Printing Today is a definite first for me, and for Microsoft Advertising, as we launch the new campaign for The Hobbit: Desolation of Smaug on Windows 8 Ads-in-Apps, followed by a cross-platform solution on MSN and Xbox 360 on 13 December. Mapping Europe's war on immigration Europe has built a fortress around itself to protect itself from ‘illegal’ immigration from the South, from peoples fleeing civil war, conflict and devastating poverty. The story is best understood through maps. The forbidden world It is a strange thing, this paranoid fear of invasion, this determination to protect themselves at all costs from these human beings who every year exile themselves from their homelands to head for an imagined promised land in the rich countries.

design rules by Jef Raskin - mprove.de The first principle. When using a product to help you do a task, the product should only help and never distract you from the task. Definition: A gesture is an action that you finish without conscious thought once you have started it. Example: For a beginning typist, typing the letter "t" is a gesture. For a more experienced typist, typing the word "the" is a gesture. Commentary.

Apple Patents Rotary iPhone Follow Techdirt Techdirt's Daily Email Newsletter A word from our sponsors... Essential Reading Techdirt Reading List The Search for Basic Emotions Table of Contents Before reading this you might want to explore your own emotions. One way to help a person do this is to study this web page: Understand, Identify Release Your Emotions. It was written by Mary Kurus. When you return to this page you can explore how you might want to classify your emotions. A Brief History of Blogging Blogs have become an integral part of online culture. Practically everyone reads blogs now, whether they’re “official” news blogs associated with traditional news media, topic-based blogs related to one’s work or hobbies, or blogs purely for entertainment, just about anyone you ask has at least one favorite blog. But it wasn’t always so. Blogs have a relatively short history, even when compared with the history of the Internet itself. And it’s only in the past five to ten years that they’ve really taken off and become an important part of the online landscape. The Early Years