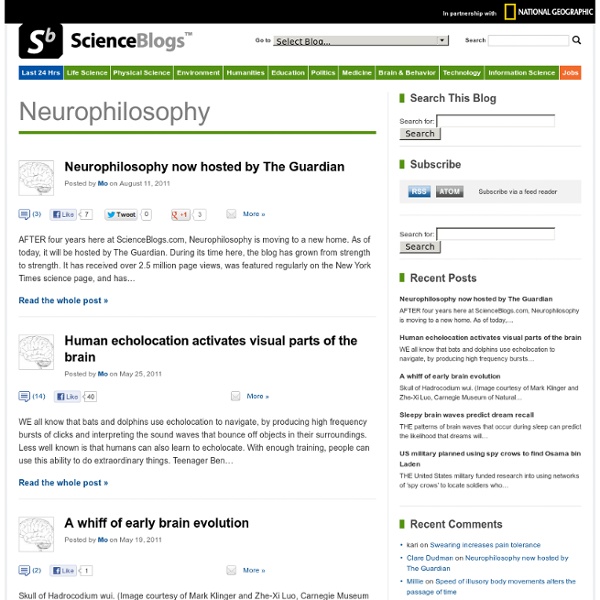 NeuroTribes "The Structure of Flame" by autistic artist Jessica Park. Courtesy of Pure Vision Arts: In 2007, the United Nations passed a resolution declaring April 2 World Autism Awareness Day — an annual opportunity for fundraising organizations to bring public attention to a condition considered rare just a decade ago. Now society is coming to understand that the broad spectrum of autism — as it’s currently defined, which will change next year with the publication of the DSM-5 – isn’t rare after all. In fact, “autism is common,” said Thomas Frieden, Director of the U.S. The CDC’s announcement brought out the usual range of conflicting responses and disputes about causes and cures. That theory is bolstered by two recent studies in South Korea and the United Kingdom, which suggest that autism prevalence has always been much higher than the estimated 1-in-10,000 when the diagnostic criteria were much more narrow and exclusionary. Vigil for George Hodgins, Sunnyvale CA 1. 2.

Mind Hacks Scientific Learning The iPad® and Student Engagement: Is There a Connection? April 1, 2014 by Carrie Gajowski When students at ACS Cobham International School (UK) got iPads, Richard Harrold saw an opportunity. As an assistant principal at the lower (elementary) school, he had been hearing glowing reports from other educators about students seeing remarkable gains when using iPads. Were the gains real? Harrold decided to find out. Harrold's study confirmed the benefits of iPads in schools: iPads benefit learners of different ages, sometimes in different ways iPads have special benefits for learners in the very early grades The iPad makes typing easier for 1st and 2nd graders More generally, results indicated that: iPads improve student engagement “iPad buddies” collaborate more iPads boost perseverance The effects discovered were more than a reaction to a fun, new “toy.” These findings are exciting, especially for learners requiring intervention. References: Harrold, R. (2012). Harrold, R. (2012). References

Blogs This is the next blog in the continuing series of interviews with top-echelon and renowned professionals. In this blog, I interview Sir John Daniel, President and CEO, Commonwealth of Learning, Globally Recognized Leader and Scholar in Education. Enjoy! Stephen Ibaraki Sir John joined the Commonwealth of Learning in 2004 after serving for three years as Assistant Director-General for Education at UNESCO. He began his career with an undergraduate degree from Oxford (First Class Honours) and a Doctorate in Science from the University of Paris, both in metallurgy. He spent four years helping to establish Québec's Télé-université, moved west to Alberta as Vice-President of Athabasca University, and then returned to Montreal as Vice-Rector of Concordia University. In 1988, Sir John chaired the Working Group that was appointed, following the 1987 meeting of the Commonwealth Heads of Government, to "develop institutional arrangements for Commonwealth co-operation in distance education".

New Humanist Blog JCS, Journal of Consciousness Studies Critical Reviews The complete text from which these are extracted is available. See also Editorial: The Future of Consciousness Studies Over the last few years, research into consciousness has at last become accepted within the academic community. As John Searle puts it, raising the subject of consciousness in cognitive science discussions is no longer considered to be ``bad taste'', causing graduate students to ``roll their eyes at the ceiling and assume expressions of mild disgust.'' But why are we interested in consciousness? The field of consciousness studies is at a very early stage, characterized by crude theories, most of which are unlikely to stand the test of time. The Journal of Consciousness Studies covers this broad field by: Full Text of Selected Articles JCS is a traditional printed publication -- most of our subscribers like to read every article and we pride ourselves in the quality of our editing, printing and binding.

Co-Nectar Why Evolution Is True The wonders of your brain - A special report Parkinson's Disease: A personal story Local videographer Mark Lyon, 53, first lost his sense of smell, then over the course of ten years, other symptoms crept along, limiting his usually aggressive approach to water sport competition. It started with tremors, then a loss of balance, "almost a metabolic feeling of bonking, like a marathoner at mile 20," he described it. "In a year, I went from competing in paddleboard races to fighting for balance and limping along at half speed. And still I persisted in denial, until my great friend and training partner Ron gave me the push I needed to see my doctor. " The doctor sent him for a consult a neurologist, Irene Litvan in the movement disorders program at UCSD. "My diagnosis came with a sense of relief. View Gallery