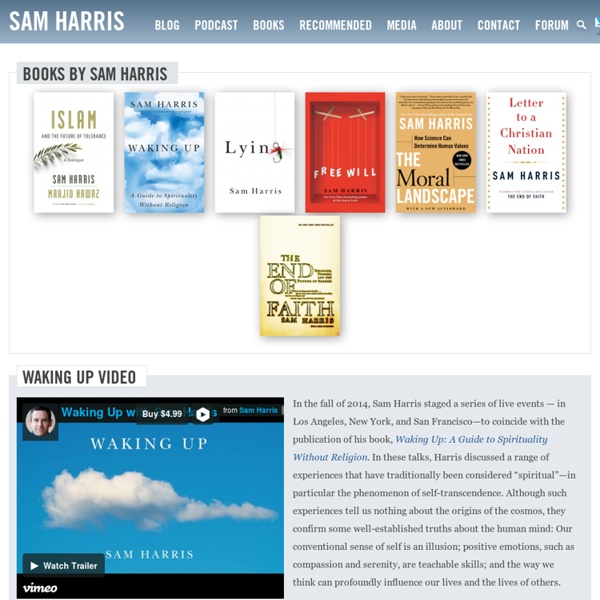 (Photo via Max Boschini) Dear Dan— I’d like to thank you for taking the time to review Free Will at such length. Publicly engaging me on this topic is certainly preferable to grumbling in private. Your writing is admirably clear, as always, which worries me in this case, because we appear to disagree about a great many things, including the very nature of our disagreement. I want to begin by reminding our readers—and myself—that exchanges like this aren’t necessarily pointless.

Biology of Religion 03. March 2012, 11:06 The online-magazine Evolution: This View of Life did get a new (and, if I might say, awesome) look. Carl Sagan Collection Since its creation in 1976, the Committee for Skeptical Inquiry (formerly known as CSICOP - the Committee for the Scientific Investigation of Claims of the Paranormal) has been honored by its association with founding member Carl Sagan, David Duncan Professor of Astronomy and Space Sciences and the Director of the Laboratory for Planetary Studies at Cornell University, Pulitzer Prize-winning author, Peabody-winning television producer, and recipient of the National Academy of Science’s highest honor, the Public Welfare Medal. Many of us first came to science and skepticism by way of Sagan’s PBS series, COSMOS, but his dedication to skeptical inquiry began long before we saw him on television. Early efforts to inform the public about science, pseudoscience, and the difference between them began in the late 1960s, and from them Sagan created one of the key principles of the skeptical movement: extraordinary claims require extraordinary evidence. Skeptical Inquirer

The Limits of Discourse : As Demonstrated by Sam Harris and Noam Chomsky (Photo via Axel Naud) For decades, Noam Chomsky has been one of the most prominent critics of U.S. foreign policy, and the further left one travels along the political spectrum, the more one feels his influence. Although I agree with much of what Chomsky has said about the misuses of state power, I have long maintained that his political views, where the threat of global jihadism is concerned, produce dangerous delusions. In response, I have been much criticized by those who believe that I haven’t given the great man his due.

Watch Daniel Dennett’s ‘How to Tell You’re an Atheist’ speech May 28, 2012 This past year at the Global Atheist Convention in Melbourne, famed American cognitive scientist, philosopher and atheist, Daniel Dennett, delivered a speech entitled “How to Tell You’re an Atheist.” Dennett, along with Richard Dawkins and the late Christopher Hitchens, might best be described as the Holy Trinity of atheism.

Star Wars Jesus Dressup! Now it's time for Star Wars Limited Collector's Edition Jesus Dressup! Dress the ultimate Jedi as your favorite Star Wars character. Just drag the outfits to The Master with your mouse and they'll snap right into place. May the Force be with You! Ayahuasca Ayahuasca (usually pronounced /ˌaɪjəˈwæskə/ or /ˌaɪjəˈwaːskə/), also commonly called yagé (/jaːˈheɪ/), is a psychedelic brew made out of Banisteriopsis caapi vine, often in combination with various other plants. It can be mixed with the leaves of Chacruna or Chacropanga, dimethyltryptamine (DMT)-containing plant species. The brew, first described academically in the early 1950s by Harvard ethnobotanist Richard Evans Schultes, who found it employed for divinatory and healing purposes by the native peoples of Amazonian Peru, is known by a number of different names (see below).[1] It has been reported that some effects can be felt from consuming the caapi vine alone, but that DMT-containing plants (such as Psychotria) remain inactive when drunk as a brew without a source of monoamine oxidase inhibitor (MAOI) such as B. caapi.