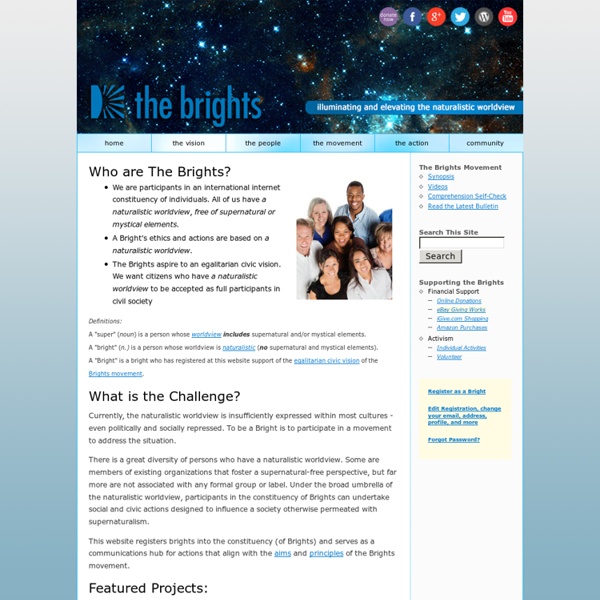 A bright is a person who has a naturalistic worldview A bright's worldview is free of supernatural and mystical elements The ethics and actions of a bright are based on a naturalistic worldview Think about your own worldview to decide if it is free of supernatural or mystical deities, forces, and entities. If you decide that you fit the description above, then you are, by definition, a bright! On this website, you can simply say so and, by doing so, join with other brights from all over the world in an extraordinary effort to change the thinking of society—the Brights movement. Click banner for statement of goals Brights: Three Aims

Biology of Religion 03. March 2012, 11:06 The online-magazine Evolution: This View of Life did get a new (and, if I might say, awesome) look. Cristi M. « Simple.Interesting. 1 March 2013 Pentru toate doamnele si domnisoarele un martisor din partea mea !! La multi ani !! The Atheist Experience Show Archive Using our Content The content of The Atheist Experience, including video and audio downloads and DVDs is currently all rights reserved. Please contact the ACA Board for special licenses. Atheist Experience Audio

Friendly Atheist Alberta Officials Reject Proposed Catholic Sex Ed Lessons That “Deny Science” Alberta officials deserve praise for this strong stance against harmful misinformation. Read more Organizations Here is a list of helpful organizations to help you connect to other atheist/secular organizations throughout the country. If you know of any atheist or secular organization that is not listed here (or within meetup) then please contact us so we can promote them here. Meetup.com is designed to help you connect with other atheists to get together for social, educational, and activist events throughout the United States. NeuroTribes "The Structure of Flame" by autistic artist Jessica Park. Courtesy of Pure Vision Arts: In 2007, the United Nations passed a resolution declaring April 2 World Autism Awareness Day — an annual opportunity for fundraising organizations to bring public attention to a condition considered rare just a decade ago. Now society is coming to understand that the broad spectrum of autism — as it’s currently defined, which will change next year with the publication of the DSM-5 – isn’t rare after all. In fact, “autism is common,” said Thomas Frieden, Director of the U.S.

National Secular Society The National Secular Society campaigns for the separation of religion and state and promotes secularism as the best means to create a society in which people of all religions or none can live together fairly and cohesively. The NSS sees secularism — the position that the state should be separate from religion — as an essential element in promoting equality between all citizens. We work in the UK and Europe to challenge the disproportionate influence of religion on governments and in public life. We provide a secular voice in the media, defending freedom and equality as a counterbalance to the powerful religious lobby and some of the more destructive religious impulses that can threaten human rights worldwide. The National Secular Society is a non-party-political organisation with members from across the social and political spectrum.

Carl Sagan Collection Since its creation in 1976, the Committee for Skeptical Inquiry (formerly known as CSICOP - the Committee for the Scientific Investigation of Claims of the Paranormal) has been honored by its association with founding member Carl Sagan, David Duncan Professor of Astronomy and Space Sciences and the Director of the Laboratory for Planetary Studies at Cornell University, Pulitzer Prize-winning author, Peabody-winning television producer, and recipient of the National Academy of Science’s highest honor, the Public Welfare Medal. Many of us first came to science and skepticism by way of Sagan’s PBS series, COSMOS, but his dedication to skeptical inquiry began long before we saw him on television. Early efforts to inform the public about science, pseudoscience, and the difference between them began in the late 1960s, and from them Sagan created one of the key principles of the skeptical movement: extraordinary claims require extraordinary evidence. Skeptical Inquirer

Portland State Sociology of Islam & Muslim Societies The Sociology of Islam and Muslim Societies Newsletter: Winter 2011 Newsletter No. 7 - ISSN:1942-7948 Contents Social and Political Transformations in the Middle East - Umit Kurt and Oguz Alyanak The Political Economy of Turkey’s Response to the Arab Spring - Altay Atli Footsteps of Revolution in the Land of Queen Sheba - Bezen Balamir Coskun Two Sides of the Same Coin; Conflicting Views of Islamism in Pakistan - Jeanette Bailey Egypt and the "Arab Spring": Notes on Facts and Challenges - Moises Garduño García The Arab Spring and the Turkish Model - Alper Y. Project Gutenberg - free ebooks On August 26 2020, the Project Gutenberg website underwent some major changes. These changes had been previewed since early 2020, and visitors to the old site were invited to try the new site, including giving input via a brief survey. The old site is no longer available. If you found yourself on this page unexpectedly, it is because an old page was redirected here.

ERS Charles Darwin and other early evolutionists were fascinated by religious phenomena and how they might be explained from an evolutionary perspective. Nevertheless, evolutionary theory became restricted to the biological sciences and excluded from the study of many human-related subjects for most of the 20th century. Only now is the theory being used to explain all aspects of humanity in addition to the rest of life. The new field of evolutionary religious studies is part of this larger trend.

The Association for Religion, Economics and Culture (ASREC) The Association for the Study of Religion, Economics, and Culture exists to promote interdisciplinary scholarship on religion through conferences, workshops, newsletters, websites, working papers, teaching, and research. ASREC supports all manner of social-scientific methods, but seeks especially to stimulate work based on economic perspectives and the rational choice paradigm. The economic study of religion comprises a variety of subfields, which collectively embrace all aspects of the social-scientific study of religion. It is by no means limited to questions concerning the commercial economy or monetary aspects of religion.