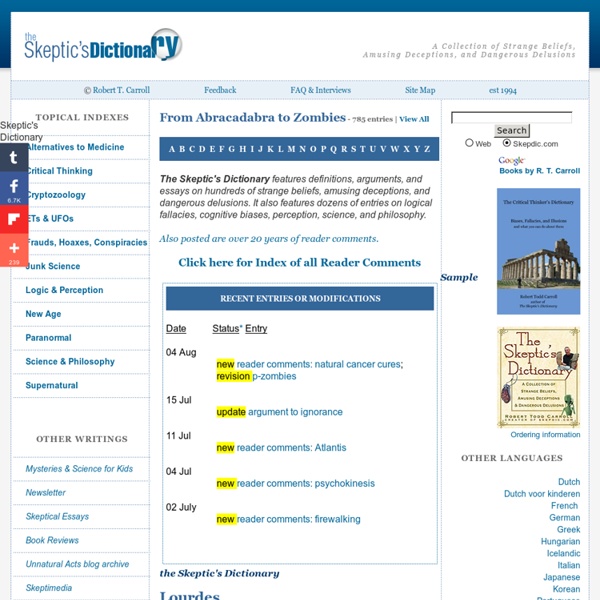 From Abracadabra to Zombies - 754 entries | View All What's New? See the most recent entries, updates, and reader comments Sample the Skeptic's Dictionary In spiritualism, a medium is one with whom spirits communicate directly. In an earlier, simpler but more dramatic age, a good medium would produce voices or apports, ring bells, float or move things across a darkened room, produce automatic writing or ectoplasm, and, in short, provide good entertainment value for the money.

ERS Charles Darwin and other early evolutionists were fascinated by religious phenomena and how they might be explained from an evolutionary perspective. Nevertheless, evolutionary theory became restricted to the biological sciences and excluded from the study of many human-related subjects for most of the 20th century. Only now is the theory being used to explain all aspects of humanity in addition to the rest of life. The new field of evolutionary religious studies is part of this larger trend. This website provides an introduction to the study of religion from an evolutionary perspective. It includes the following features:

Scientific Method: Relationships Among Scientific Paradigms To see the full map of relationships among scientific paradigms, click here or on the image below. Note: The map is a large (8.7 MB) file and may take a while to download. Research & Node Layout: Kevin Boyack and Dick Klavans (mapofscience.com); Data: Thompson ISI; Graphics & Typography: W. Bradford Paley (didi.com/brad); Commissioned Katy Börner (scimaps.org) This map was constructed by sorting roughly 800,000 published papers into 776 different scientific paradigms (shown as pale circular nodes) based on how often the papers were cited together by authors of other papers. Links (curved black lines) were made between the paradigms that shared papers, then treated as rubber bands, holding similar paradigms nearer one another when a physical simulation forced every paradigm to repel every other; thus the layout derives directly from the data.

100+ Sites to Download All Sorts of Things These days you can find all sorts of things online, from audio books to flash files, from sound effects to CSS templates. Below we compiled a list with over 100 download sites that serve that purpose. We will also try to keep the list updated, so if your favorite download site is not here, let us know about it with a comment. Audio Books Librivox: One of the most popular audio libraries on the web. Portland State Sociology of Islam & Muslim Societies The Sociology of Islam and Muslim Societies Newsletter: Winter 2011 Newsletter No. 7 - ISSN:1942-7948 Contents Social and Political Transformations in the Middle East - Umit Kurt and Oguz Alyanak The Political Economy of Turkey’s Response to the Arab Spring - Altay Atli Footsteps of Revolution in the Land of Queen Sheba - Bezen Balamir Coskun Two Sides of the Same Coin; Conflicting Views of Islamism in Pakistan - Jeanette Bailey Egypt and the "Arab Spring": Notes on Facts and Challenges - Moises Garduño García The Arab Spring and the Turkish Model - Alper Y. Dede Will Geopolitics Split Along Sectarian Lines in the Middle East? Witnessing the Rise of a Sectarian Speech Amidst War of Perceptions - Camille Germanos Turkey as a Model Democracy?

What Is Nothing? A Mind-Bending Debate about the Universe Moderated by Neil deGrasse Tyson by Maria Popova “You can’t assert an answer just because it’s not something else.” Isaac Asimov — sage of science, champion of creativity in education, visionary of the future, lover of libraries, Muppet friend — endures as one of the most visionary scientific minds in modern history. Every year, the Hayden Planetarium at the American Museum of Natural History, of which Asimov had been a tenacious supporter, hosts the Isaac Asimov Memorial Debate, inviting some of the greatest minds of our time to discuss monumental unanswered questions at the frontier of science. The 2013 installment explored the existence of nothing in a mind-bending conversation between science journalist Jim Holt, who has previously pondered why the world exists, theoretical physicist Lawrence Krauss, who has explored the science of “something” and “nothing,” Princeton astrophysics professor J.

Superorganism - Wikipedia A termite mound made by the cathedral termite A coral colony A superorganism is an organism consisting of many organisms. The term was originally coined James Hutton (1726-1797), the "Father of Geology" in 1789. See the discussion of Geophysiology for more on the use of this term in geological and ecological contexts. The term is now usually meant to be a social unit of eusocial animals, where division of labour is highly specialised and where individuals are not able to survive by themselves for extended periods of time. SCHOPENHAUER'S 38 STRATAGEMS, OR 38 WAYS TO WIN AN ARGUMENT Arthur Schopenhauer (1788-1860), was a brilliant German philosopher. These 38 Stratagems are excerpts from "The Art of Controversy", first translated into English and published in 1896. Carry your opponent's proposition beyond its natural limits; exaggerate it. The more general your opponent's statement becomes, the more objections you can find against it. The more restricted and narrow his or her propositions remain, the easier they are to defend by him or her.