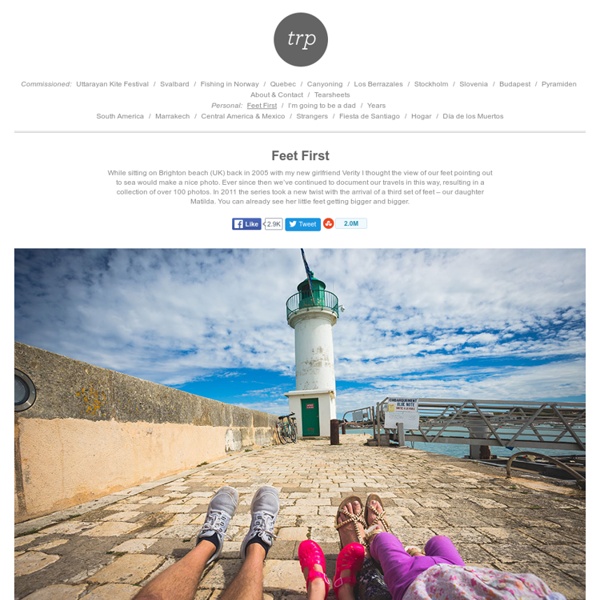 The diversity within South America is staggering, mountains, glaciers, deserts and waterfalls. It has them all. Over the course of six months I travelled down Chile, up Argentina, around Bolivia and through to Peru. What I saw and experienced along the way will live with me forever. As we arrived at a small village in Bolivia I spotted this group playing a game of football. The backdrop to their game was incredible and despite being at 5000m above sea-level, they were happily running about.

25 Mind-Blowing Aerial Photographs Around the World Rano Kau volcano in Rapa Nui National Park, Easter Island, Chile – Photograph by YANN ARTHUS BERTRAND For me, the allure of aerial photography is the unique perspective it gives. The world feels so different when viewed from above. It always gives me a newfound appreciation for this pale blue dot we call home. Still Looking For Paradise? Maldives - justpaste.it Double chain of twenty-six atolls… The Republic of Maldives, or simply the Maldives, is an island nation in the Indian Ocean. It consists of approximately 1,190 coral islands grouped in a double chain of 26 atolls, along the north-south direction, spread over roughly 90,000 square kilometers, making this one of the most disparate countries in the world. The atolls are composed of live coral reefs and sand bars, situated atop a submarine ridge 960 kilometers long that rises abruptly from the depths of the Indian Ocean and runs from north to south. Crystal clear waters, beautiful white sand beaches, swaying palm trees and fabulous dive sites – that’s why the Maldives, is known for being one of the best tropical holiday destinations in the world. ...and no need to climb ;)

Pencil Vs Camera by Ben Heine Ben Heine (born June 12, 1983 in Abidjan, Ivory coast) is a Belgian multidisciplinary visual artist. He is best known for his original series “Pencil Vs Camera”, “Digital Circlism” and “Flesh and Acrylic”. “Pencil Vs Camera” mixes drawing and photography, imagination and reality. It’s a new visual concept invented and initiated by Ben Heine in 2010. It’s full of magic, illusion, poetry and surrealism. Ben published his first “Pencil Vs Camera” image in April 2010 but the series is the result of a long graphic exploration and a logic consequence of his personal artistic development.

70 Photographs That Will Take Your Breath Away We here at DPShots believe that the easiest way to learn photography is to learn it by example. Every now and then we come up with some amazing photography examples that take your breath away. This post is no different. We have collected some of the most amazing, most awesome and THE most beautiful photography we could ever get our hands on. This post will help a lot of budding photographers to see where they are headed. It shows what is possible with Photography and a bit of creative thinking. Amazing Places To Experience Around The Globe (Part 1) - StumbleUpon Preachers Rock, Preikestolen, Norway Blue Caves - Zakynthos Island, Greece Skaftafeli - Iceland

Incredible time-lapse shows the Milky Way from the plains of South Dakota The spiral galaxy that is the Milky Way is beautifully portrayed in the latest must-see time-lapse video shot by Randy Halverson. Halverson wowed us previously with his Sub-Zero time-lapse that was shot during the frigid midwestern winter. The snow has since melted and Halverson is back in the same locations, showing the awesome night skies of the South Dakota plains. The Milky Way, which has upwards of 400 billion stars, was captured by Halverson who spent the month of May shooting the footage when time and weather permitted. He said the biggest challenge was getting a clear night, as many were cloudy and windy, and few were clear enough for capturing the stars.

Eyjafjallajökull Photos by Skarphéðinn Þráinsson : SITEAnd by Marco Fulle : SITE Photos by Skarphéðinn Þráinsson : SITEAnd by Marco Fulle : SITE Is this Atlantis?: Photographer creates magnificent underwater world for exhibition that can only be viewed 145 feet under the sea By Daily Mail Reporter Published: 00:04 GMT, 1 August 2012 | Updated: 00:57 GMT, 1 August 2012 Greek philosopher Plato wrote of the legendary city of Atlantis, that sunk to the bottom of the ocean. Now photographer Andreas Franke has created a similar mythical underwater world for a new exhibition - but you can only see it with your scuba gear on. Armed with his camera, Mr Franke dove down to the Vandenberg, a United States missile tracking ship that sunk in 2009 off the coast of Key West, Florida, and used the spectacular images he took as a canvas for a surreal civilisation that never existed. Ballet: Ballerinas practice their art

Fall in Northern Michigan: Photos & Trip Report » deadman's hill I've never hiked it, but the Jordan River Pathway is supposed to be one of the nicer places to backpack in lower Michigan. Deadman's Hill would be the starting point for such a hike and it offers a panoramic view of the Jordan River Valley. We lucked out and caught the trees at peak color. Photography School adorama.com Adorama Photography TV presents the Canon EOS-6D. Rich is back from Vegas and eager to share his experience with this great new Digital SLR from Canon. Join Rich as he takes you through a more in-depth review of all the functions of this reliable and cost efficient camera. photos by Linda McCartney Paul, Stella and James, Scotland, 1982 Stallion, Scotland, 1993 The Beatles, London, 1968 Paul McCartney, John Lennon Paul and Martha, Londres, 1968 Janis Joplin, Yoko Ono

Chiles Puyehue Volcano Erupts - Alan Taylor - In Focus On Saturday, a volcano in the Puyehue-Cordon Caulle chain of south-central Chile erupted after lying dormant for more than 50 years. The government evacuated several thousand residents as Puyehue threw ash more than 6 miles (10 km) into the sky, pushing the plume toward neighboring Argentina. Authorities had already put the area around the volcano on alert after a flurry of earthquakes earlier on Saturday -- at one point, the tremors reached an average of 230 per hour. Collected here are a handful of spectacular photographs of the eruption this weekend and its effects in Chile and Argentina. [21 photos] Use j/k keys or ←/→ to navigate Choose: