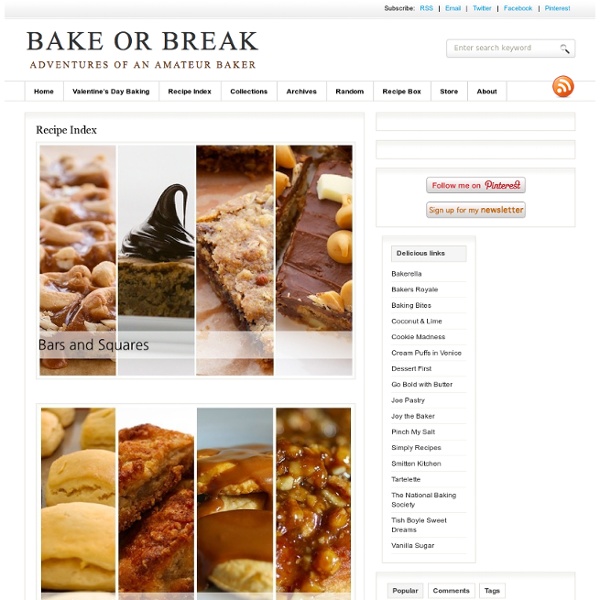 <div class="no-js-alert"> Please enable JavaScript to view this website. </div> Subscribe Search Recipe Index Stay connected Thanks for visiting Bake or Break! Subscribe for free today to keep up with the latest recipes and my monthly newsletter. And you can keep up with BoB through your favorite social media: Download my first cookbook today! Bake or Break Volume 1: Cookies, Brownies, and Bars contains more than 30 original recipes with a full-page, color photograph for each. A few of my favorite blogs BakerellaBakers RoyaleBaking BitesCookie MadnessDessert FirstGo Bold with ButterJoe Pastry Joy the BakerPinch My SaltTarteletteThe Baker ChickThe National Baking SocietyVanilla Sugar

Top 10 Recipes of 2010 Last year I did a round up of the 10 most visited posts of 2009 on this blog. I was surprised to see that this year several posts from last year are still in the top 10! I just wanted to say thanks to all of you that read Amanda’s Cookin’, those of you that share my posts with your friends and family, and those that make my recipes and come back to tell me. Your feedback is invaluable to me, not to mention a fun ego boost. Hee hee. :) But seriously, I love working on this blog, being in the kitchen, and sharing my recipes with you.

Crockpot Mongolian Beef My family loves Asian-inspired food. We don’t have many takeout places close to where we live, so when I find an easy recipe (especially when it is made in the crock pot), I jump on it. I knew this recipe would be a hit even before I made it. It doesn’t require any cooking on preparation day, just throw a few ingredients in a bag, and that’s it! It smells sooooo good while it’s cooking, and looks like you spent all day slaving over the stove! By the time the steak was finished cooking, it was fall-apart tender.

Celebrate Strawberry Season Turns out it's possible to improve upon classic tiramisu -- just add strawberries! 3 Reclips 0 Likes Once I tried to make strawberry jam and burned it. This time I'm going to be more diligent, because it was otherwise really easy.

Apple Pie Bars Any day is a good day for apple pie, right? To me apple pie isn’t just a Fall and Thanksgiving dessert, I want apple pie all through out the year. Why have such a good thing only once a year? Magic Custard Cake Recipe Update! A Chocolate version of this magic custard cake. Get the Chocolate Magic Custard Cake Recipe Here When I saw a magic custard cake recipe on Pinterest two weeks ago, I was floored. I mean, it left me in a state of delicious shock that something so simple could create an incredible piece of dessert. It looked so easy and like magic, it separated into three layers: a cake layer on top, a custard layer in the middle and another dense cake layer on the bottom.

S'more Cookie Bars These were a huge hit! Keith, Andrew, and Kramer all ate at least two of these the other night. I brought some into work, too, and they quickly disappeared. They seriously tasted just like a s’more, and they should, considering that all of the same ingredients are used, just kicked up a notch! The crust is a graham cracker cookie, topped with marshmallow, a layer of chocolate, and a graham cracker crust to top it all off.

S’mores Bars S’mores Bars by Rebecca Jun 21st, 2010 // Desserts, Recipes If ever there was an irresistibly delicious dessert THIS IS IT. The recipe comes from my friend Mindy’s mom, Peg. Peg, I think you might owe me a years worth of personal training sessions because I cannot stop eating these! They taste just like s’mores only more sinful. Number 3: Been in a Hockey Fight… So right after everyone seemed to be doing the Omnivore 100 meme, another one came out. This time about things that you had done in your life. Number 3….”Been apart of a hockey fight”. Several people when filling that out commented that they were interested in knowing how I would answer that question.