40 Of The Most Powerful Photographs Ever Taken 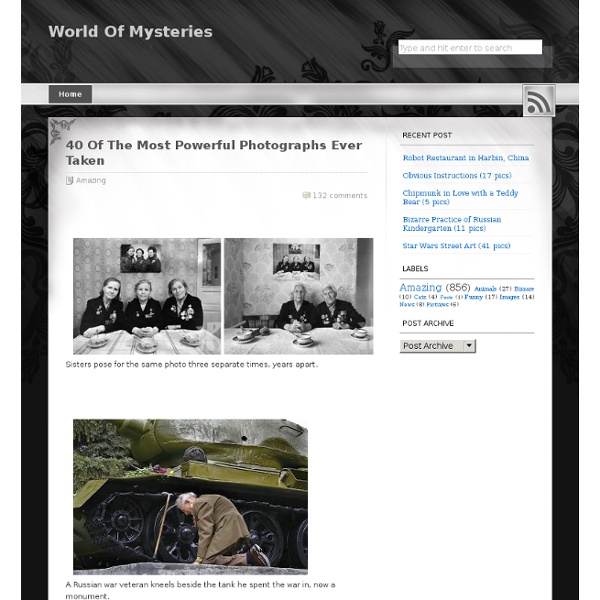 Sisters pose for the same photo three separate times, years apart. A Russian war veteran kneels beside the tank he spent the war in, now a monument. A Romanian child hands a heart-shaped balloon to riot police during protests against austerity measures in Bucharest. Retired Philadelphia Police Captain Ray Lewis is arrested for participating in the Occupy Wall Street protests in 2011. A monk prays for an elderly man who had died suddenly while waiting for a train in Shanxi Taiyuan, China. A dog named "Leao" sits for a second consecutive day at the grave of her owner, who died in the disastrous landslides near Rio de Janiero on January 15, 2011. The 1968 Olympics Black Power Salute: African American athletes Tommie Smith and John Carlos raise their fists in a gesture of solidarity at the 1968 Olympic games. Jewish prisoners at the moment of their liberation from an internment camp "death train" near the Elbe in 1945. John F. "Wait For Me Daddy," by Claude P. U.S.

The Five Most Iconic Images Of Photography Iconic Images Of Photography: Starving Child and Vulture, Kevin Carter, 1993 The most haunting image on the most iconic images of photography, Kevin Carter captured the devastating famine in Sudan with a photograph of a toddler crawling to a UN feeding center while a vulture stalks her as prey. Carter won a Pulitzer Prize for his work but received harsh criticism for both the photograph and for not helping the child. A year later, gripped by the devastation and depression he had seen, Carter committed suicide. Murder of Vietcong by Saigon Police Chief, Eddie Adams, 1968

Throwback Thursdays: Betchiest Trends of the 90s Polly Pocket Talk about unrealistic body expectations Tamagotchi There was no greater feeling than cleaning up its poop. Choker tattoo necklaces The 15 Craziest Things In Nature You Won’t Believe Actually Exist Mother Nature is beautiful and amazing because we can see many amazing stuff like these 15 things that you won’t believe they actually exist. All these places are real. It is hard to believe in that, but that is true. 50 Captivating Slow Shutter Speed Photos Using a slow shutter speed allows for a completely different style of photography - from light painting to capturing smooth water effects. This article features a quick introduction to this style of photography, followed by 50 really amazing examples of the technique in action. Hopefully you'll leave feeling inspired! Shooting With a Slow Shutter Speed At the most basic level, you simply need to place your camera on a tripod (or flat surface) then make sure the shutter speed is set to a low value. Anything from around 1/10 of a second should allow an interesting effect, and experimentation is key - you'll probably need to play around to find the most appropriate setting.

Focus Focus on the Red Dot and give us a like if the blue circle disappeared. This is a practical demonstration of the word 'focus'; when you focus on a thing, the remaining thoughts and objects should disappear. Winners of the National Geographic Photo Contest 2012 - In Focus The winners have just been announced of this year's National Geographic photo contest. The Society received more than 22,000 entries from over 150 countries. Presented here are the winners from the three categories of People, Places, and Nature, captions provided by the photographers. The 33 Most Beautiful Abandoned Places In The World Many people doesn’t know, and didn’t even heard about these famous abandoned places. Many of these places are really something amazing, but they are also really sad when you take a closer look at them. On the folowing list, you can see abandoned planes, abandoned ships, as well as the abandoned houses, and so many other things, that are really amazing and magnificent. So, check out these amazing abandoned places photos. 1.

IBM's Smarter Cities Billboard Campaign Billboards are meant to distract and annoy, to draw attention and to not fit in. In its recent on-street ad campaign, IBM promotes its People for Smart Cities Program with billboards that are even more invasive. Ogilvy & Mather France took the concept of the board and bent it into shapes that could – with some effort – be seen as solutions for a somewhat smarter city, London and Paris in this case. A board bends to become a bench, a rain shelter or a ramp over stairs. It is still visual clutter, it is still preaching something, but at least it is doing it with a bit more imagination than just pushing a loud message. How many citizens actually paid attention to IBM’s message on the street while perusing the practical benefits of the boards, we don’t know, but the social media attention this campaign is achieving has certainly worked its magic.

Places That Are Actually Real But Don't Look So These places look so unreal, but they are real! Maybe some of you were on one of these beautiful place, and if one of you did, you are than really happy person who live on this planet! Just look how this photos are cool and so sweet. My sketchbook feat. Joao Paulo Alvares Ruas Another appointment with artists’ sketchbooks, today featuring Joao Paulo Alvares Ruas, illustrator from Sao Paulo, Brazil. 22 Incredible Photos of Faraway Places Thailand Chances are you already know Steve McCurry as the man who took one of the most iconic photos of our time. It was of a 12-year-old Afghan refugee girl who's piercing green eyes told us her harrowing story. The image itself was named "the most recognized photograph" in the history of the National Geographic magazine and her face became famous as the cover photograph on their June 1985 issue. Beyond just that one photo, McCurry has shot over a million images spanning 35 years.