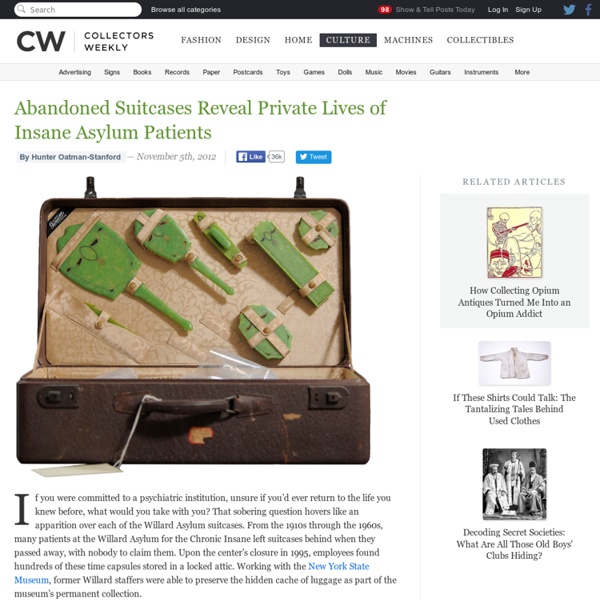 If you were committed to a psychiatric institution, unsure if you’d ever return to the life you knew before, what would you take with you? That sobering question hovers like an apparition over each of the Willard Asylum suitcases. From the 1910s through the 1960s, many patients at the Willard Asylum for the Chronic Insane left suitcases behind when they passed away, with nobody to claim them. Upon the center’s closure in 1995, employees found hundreds of these time capsules stored in a locked attic. Working with the New York State Museum, former Willard staffers were able to preserve the hidden cache of luggage as part of the museum’s permanent collection. “There were many patients in these asylums who were probably not unlike friends you and I have now.” Photographer Jon Crispin has long been drawn to the ghostly remains of abandoned psychiatric institutions. Crispin’s photographs restore a bit of dignity to the individuals who spent their lives within Willard’s walls. Freda’s suitcase.

Jon Crispin's Notebook Willard Suitcases / Anna H / Talk in Albany After a bit of a break, we were back to shooting more of the suitcases yesterday. It was a productive day, and after the intensity of the Kickstarter appeal, it was nice to be back to doing what is the most important part of the project. Anna’s case was in nice condition and the wicker pattern was lovely. Best Movies of 2013 May we stipulate that 2013 has been a flat-out, stone-cold, hands-down spectacular year in movies? Which means that many of us are frustrated. After all, the average filmgoer only sees about six films a year. This is being written at a time when there are at least 10 must-see movies in area theaters, not to mention titles that are stacking up in our on-demand queues like backed-up shuttle flights circling Reagan National. And guess what: There are more on the way. Even with names like Soderbergh, Spielberg and Lucas decrying the current state of cinema in recent months, it’s still easy to choose 10 movies of exceptional ambition, vision and artistic sensitivity – so easy that we decided to expand the list to a lucky 21.

Willard Suitcases: Unpacking The Rest by Jon Crispin In 1995, when the Willard Psychiatric Center in Willard, NY was closed, staff members were surveying the contents of the buildings when they discovered an attic containing over 400 patient suitcases. The cases dated from between 1910 and the late 1960s, and were saved by Willard employees after the deaths of the patients. My photographs tell the story of these people through the objects they brought when they were admitted to Willard. They had lives that were complicated, varied, and in many cases, compelling, and I am honored to be able to restore their identities as more than just patients in a psychiatric facility. When I began photographing the collection of Willard Asylum suitcases in March of 2011, my plan was to feature only the ones that contained the most materials.

My collection of funny emails from my inbox. Subject: 5 MINUTE MANAGEMENT COURSE Lesson 1: A man is getting into the shower just as his wife is finishing up her shower, when the doorbell rings. The wife quickly wraps herself in a towel and runs downstairs. When she opens the door, there stands Bob, the next-door neighbor. Willard Asylum Suitcase Documentation by Jon Crispin In 1995, the New York State Museum was moving items out of the Willard Psychiatric Center in Willard, NY which was being closed by the State Office of Mental Health. It would eventually become a state-run drug rehabilitation center. Craig Williams and his staff became aware of an attic full of suitcases in the pathology lab building. The cases were put into storage when their owners were admitted to Willard sometime between 1910 and the 1960s. And since the facility was set up to help people with chronic mental illness, these folks never left. An exhibit of a small selection of the cases was produced by the Museum and was on display in Albany in 2003.

Synonyms for words commonly used in student's writing Amazing- incredible, unbelievable, improbable, fabulous, wonderful, fantastic, astonishing, astounding, extraordinary Anger- enrage, infuriate, arouse, nettle, exasperate, inflame, madden Angry- mad, furious, enraged, excited, wrathful, indignant, exasperated, aroused, inflamed Jon Crispin: Suitcases from the Willard Asylum for the Insane (PHOTOS). Jon Crispin. Photographer Jon Crispin first laid eyes on the Willard Asylum for the Insane in the early 1980s. A friend who was a preservationist asked Crispin if he had ever seen the abandoned building during a drive back from a wedding by Seneca Lake in New York. The Top 75 Pictures of the Year for 2013 Update: if you liked this post, you’ll adore our latest post on the 38 Most Haunting Abandoned Places on Earth HERE. Following on from our very successful blog “100 of the Best Street Art Images of 2013″ (see HERE), we’ve widened the net and thanks to the guys over at Sifter, we bring you the Top 75 Pictures of 2013. All credit goes to the individual photographers and their inspiring visions of our beautiful planet. What’s your favorite? Photograph by strummingmusic on Reddit

Asylum Suitcases, Found And Photographed : The Picture Show Ed. Note: This article was originally published Nov. 2, 2011. Photographer Jon Crispin has a fascination with things that are left behind. 50 Life Hacks to Simplify your World Life hacks are little ways to make our lives easier. These low-budget tips and trick can help you organize and de-clutter space; prolong and preserve your products; or teach you something (e.g., tie a full Windsor) that you simply did not know before. Most of these came from a great post on tumblr. There is also a great subreddit ‘r/lifehacks‘ with some fantastic tips as well. 20. Separate egg yolks like a boss

Willard Asylum Suitcases: Photographer Interview Jon Crispin Betty: Are there any specific high (or low) points from the project that stand out in your mind? Jon: The suitcases and the contents are just overwhelmingly evocative. It’s the thing that I’ve done in my life as a photographer that that’s gone much further than anything else. I get asked whether I have a favourite case – I tend not to think of this project in terms of highs and lows so much. I think of all of the images as a whole rather than as specific images.

40 Clever Life Hacks to Simplify your World Back in January the Sifter posted 50 Life Hacks to Simplify your World. The post went on the be one of the most shared articles in the history of the website. At first I was surprised, but soon realized that we all want to simplify and improve our lives; especially when a solution to a common problem is cheap, effective and easy to-do! After spending a lot of time sifting through reddit’s Life Hacks subreddit, BuzzFeed’s endless Life Hack posts and wading through a ton of Life Hack pins on Pinterest, I came up with the list below. Another 40 tips that will hopefully simplify your life!