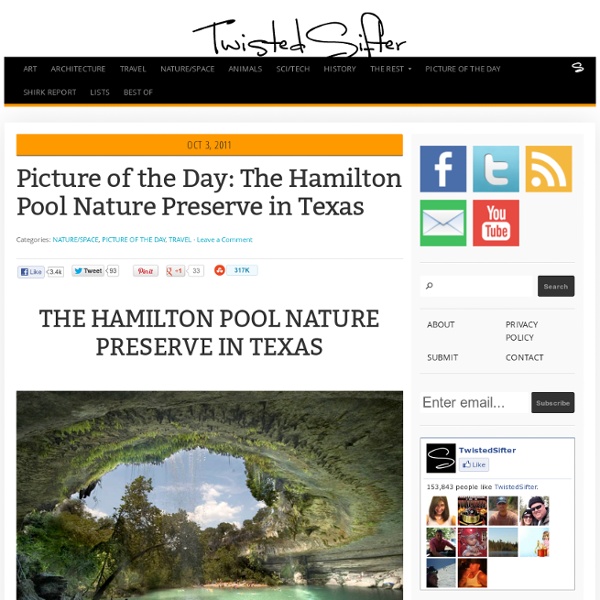 Oct 3, 2011 Located approximately 30 miles (48 km) southwest of Austin, Texas, the Hamilton Pool Preserve is a historic swimming hole which was designated a preserve by the Travis County Commissioner’s Court in 1990. Located 3/4 mile upstream from its confluence with the Pedernales River, Hamilton Creek spills out over limestone outcroppings to create a 50 foot waterfall as it plunges into the head of a steep box canyon. The preserve is home to the Golden-Cheeked Warbler, and a great variety of other birds. A unique natural area surrounds this pool, collapsed grotto and canyon, formed by thousands of years of water erosion.

Most Fascinating Geological Wonders On Earth - StumbleUpon Mar 08, 2011 / Category : Misc / 37 Comments This planet we live on offers us beauty beyond words. Every country has its own special region that takes your breath away with the magnificence of it. Here we can see some places that are a geological wonder that you may know about already, or maybe not? Antelope Canyon, Arizona, USA Antelope Canyon is one of the world's most beautiful canyons. Pamukkale, Turkey These stunning terraces of water are found in Pamukkale Turkey and were shaped from a substance called travertine, which forms from the build-up of sediments of calcium carbonate deposited in water from hot springs. The Wave, Arizona, USA This incredible formation of sandstone rock is stunning in its colors. Moeraki Boulders, New Zealand The Moeraki Boulders are amazing boulders found on the New Zealand coast. Bungle Bungles, Australia Bungle Bungles are found in the the Purnululu National Park in Western Australia, also a World Heritage Site. Fantasy Cave, Bermuda Wave Rock, Australia

Plitvice Lakes National Park, Croatia | Beautiful Places to Visit - StumbleUpon The stunning Plitvice Lakes National Park lies in the Lika region of Croatia. The park is surrounded by the mountains Plješevica, Mala Kapela, and Medveđak, which are part of the Dinaric Alps. The 16 blue-green Plitvice Lakes, which are separated by natural dams of travertine, are situated on the Plitvice plateau. 10 of the Best Places to Hike in the United States The United States is a huge country with tons of variety, so there’s no shortage of awesome places to lace up the boots, get that blood pumping, and take in some amazing views. Want to add US hikes to your trip itinerary? If you’ve been stuck indoors much of the winter and spring, here are ten great places around the country to get out and hike. Zion National Park – Utah With a wide variety of options and a multitude of landscapes, Zion National Park in Utah is a hiker’s and climber’s paradise. Popular hikes in Zion There are a lot of challenging trails in Zion, and it’s imperative to be aware of weather and time of year, particularly when it comes to hiking in the canyon, as flash floods can happen at any time. Angels Landing - One of the most popular hikes in the park is also one of its most challenging. There are literally hundreds of different intersecting trails in Zion, so be sure to check out the following links for more information about hiking in Zion: Grand Canyon Backcountry Hiking

How to Use Frequent Flyer Miles to Travel for Free (even if you don't fly very often) What People Say My boyfriend and I used your air miles strategy to make over 120,000 points in six months. We both flew to Costa Rica for free in first class – lived it up in the "Admiral's Lounge" – then he flew himself and his brother to Alaska. I received more than 55,000 miles in the first month. We are taking our family on a world-wide adventure next fall. Thanks for putting the 70+ hours into creating such an excellent product! I really like the fact that the advice is practical things *you can actually do*. If you want to succeed in working for yourself, tune out all the egomaniacs and get yourself a copy of Chris's guides instead. You'll Learn to: Earn up to 200,000 Frequent Flyer miles a year without flying Use miles to book free travel anywhere in the world Repeat. Special Bonus: One Free Plane Ticket, Guaranteed. Go over here if you're ready, or keep reading to learn more. How to Visit 100+ Countries and Counting Thanks for checking out the Frequent Flyer Master project. P.S.

The Seven Lost Cities Of The World - All That Is Interesting - StumbleUpon Located on a mountain ridge above the Urubamba Valley, Machu Picchu was the ‘Lost City of the Incas’, inhabited in the 15th and 16th century. Archaeologists believe that the mountain estate was built for the Inca emperor, Pachacuti, but was abandoned because of the Spanish Conquest. The inhabitants were also believed to have been wiped out by smallpox introduced by Spanish conquistadors, leading to Machu Picchu becoming one of the lost cities of the world.

Travel Hacking for Noobs: How We Save Hundreds on Airfare, Get Free Lodging, & Make Money Overseas Milligan and her monkey contemplate their favorite travel hacking tips. Photo by Courtney Baker. Advanced travel hacking is an art form. I have no doubts about that. But, contrary to popular belief, getting started is actually quite simple. But I’ll share a little secret with you… it’s not as glamorous as most people think. We certainly aren’t professional travel hackers. We aren’t total noobs, though. Anyway, here are some tips and tricks to take you from naysayer to noob in as short of time frame as possible. Once you graduate to advanced (or if you are already there), I’d appreciate you teaching me everything you know in the comments below! How We Find Airfare: A Video Walkthrough of How to Save $521+ The video below is just over 20 minutes long. [Note: I'll be replacing this video with a higher quality version soon.] [If the video doesn't show up in your reader or e-mail, click here to watch now] Obviously the example in the video speaks for itself. Willing Work On Organic Farms

Marvel at the Magnificent Marble Caves [35 PICS] - StumbleUpon Can you imagine something happening that would endanger these exquisite azure caverns? It might if Chile continues with plans to build five hydro-power dams in Patagonia. Photo #7 by © Jorge Leon Cabello The water has eroded the marble to create cavities and marble caves. There are different color shades, depending on the contents’ impurities. There are white banks of great purity, but it is also possible to find blue and pink marble banks due to the presence of other minerals. Amazing geological formations on Chilean side of Lake Carrera. It would be a real shame if the hydro-power dams damage the lake and the marble caves on top of the surrounding natural habitats for wildlife. View of the lake and where to find the marble caverns in the Aysen region of Chile.

Roadside Attractions - Weird Roadside Attractions at WomansDay.com If you've ever gone on a road trip, chances are you've driven past a few unusual tourist attractions. And if you've stopped to take a look, you know they can range from odd to completely outrageous. Below, check out our list of 15 wacky ones worth seeing, including a museum devoted to toilet seat art and the world's largest hammock. Bizarre? Yes. The Beer Can House In 1968, John Milkovisch, a retired upholsterer, began a very unique home improvement project; he started by inlaying marbles, rocks and metal pieces to replace the grass in his yard, then moved on to adding aluminum beer can siding to the exterior of his house. Oregon Vortex A world of paranormal activity awaits you at the Oregon Vortex, a spherical field of force that temporarily suspends the laws of physics. World's Largest Hammock Off North Carolina's Route 158 sits a hammock suitable for any giant-sized napper. Cadillac Ranch Weeki Wachee Springs Barney Smith’s Toilet Seat Museum Mütter Museum Largest Ball of Stamps Foamhenge