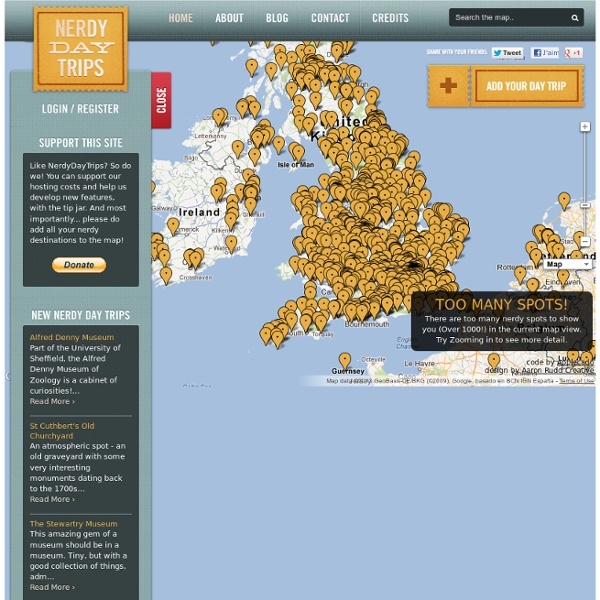 Move over eBay - this is the police Get amazing bargains on property, cars, computers ... buy top-quality stolen bikes for £10 at official police auctions ... discover the secrets of government auctions ... fantastic prices on army surplus ... ridiculously low clearance prices from government departments. These claims are plastered over internet adverts. But do these secret stashes of bargain goods really exist? Is there a sort of parallel eBay known only to a select few? Many of the claims are indeed bunk, but when Guardian Money investigated, the big surprise was that there are bargains to be found if you search hard enough - from stolen bikes starting at £1 where the police can't find the owner to RAF officer shoes at £4 a pair.

50 places you can't reach without climbing [pics] A celebration of the high places of the world, in photographs. A FEW YEARS AGO, I was in southwestern Bolivia and had the opportunity to climb the 19,400ft Licancabur (as seen in photo #5 below). Acclimated as I was by having lived at 8500ft for the previous three months and sleeping at 14,000ft the night before, it was the most challenging hike of my life. After passing the halfway point — when our guide informed us that if we didn’t have a headache yet, we were probably good to go — it was baby step…baby step…rest…repeat. With each stop, I turned and looked out away from the slope, toward the emerald water of Laguna Verde and the eerie crimson and rust of the altiplano far below, and then up towards the summit, smeared with snow. 30 Things to Stop Doing to Yourself When you stop chasing the wrong things you give the right things a chance to catch you. As Maria Robinson once said, “Nobody can go back and start a new beginning, but anyone can start today and make a new ending.” Nothing could be closer to the truth. But before you can begin this process of transformation you have to stop doing the things that have been holding you back. Here are some ideas to get you started:

The 20 Best Travel Websites on the Internet - Golden Book Traveler Update: Visit the 2012 version of The 20 Best Travel Websites on the Internet I hope that everyone who attended my SXSW Core Conversation panel on How to Make Money Traveling Around the World enjoyed the presentation. As promised, I have a listing of my top 20 favorite travel websites (in no particular order). I’m still working on my eBook “70 Vacations in 7 Months“. The project has consumed most of my time of late. If you attended the presentation with myself and Tynan, shoot me over an email (if you haven’t already) and I’ll make sure you receive a free copy upon completion

A lot of inspiration - StumbleUpon Really a lot ! Photos from Souvenirs of a girl alexandrasophie; wildfox; Ikea; Ella May ; Vogue Italia, Hello mr fox, Rodarte, D&L Compagny; Linda Portman, Sadhbh Kennedy, The Virgin Suicides, deerlings, Claudia Smith, Tim Walker, Nylon, miu miu, Proenza Schouler, Elle, Jil Sander, Charles Anastase, Russh, Giles, Krisatomic, Burberry Prorsum, Alexander Mc Queen, Lula, Dior, Cacharel, The Selby, Topshop, Johnnys bird,Bare Bjarne If some pictures are yours and you need credits, let me know. Eight Secrets Which Writers Won’t Tell You Image from Flickr by Lazurite This is not particularly relevant to the post, but I’m getting an awful lot of comments telling me, often a little snarkily, “it’s ‘THAT’ not ‘WHICH’”. The “don’t use which for restrictive clauses” rule comes (as far as I can tell) from Strunk and White. Plenty of authors, including Austen, have used “which” exactly as I use it in the title. It’s very commonly used like this here in England, so I’m guessing my comments are coming from US readers.

Channel in time The castle of Mont Orgueil. Photo: Alamy An intriguing mix of English and French, Jersey rewards an explorer, writes Diane Armstrong. Hunched over, I step through the small entrance at the foot of a massive man-made mound, and tread along a narrow passageway lined with gigantic slabs of stone that have been polished smooth. How to Get Rid of People Who've Overstayed Their Welcome These all assume that the person who is overstaying is able to pick up on the cues. I had a former co-worker who was somewhere on the Aspergers/Autism spectrum and couldn't pick up on subtle cues. He would be standing in my office talking to me as I collected materials, shut down my computer, picked up things, stood up, and walked to my door and stood in the hallway — and he would still keep talking to me.

Planning a Trip to Europe: Your 10-Step Guide Before you can experience authentic Spanish tapas, piazzas in Rome or rooftop terraces in Prague, an important to-do list stands between you and your European vacation. The logistics involved in planning a Europe trip may seem tedious or overwhelming, but the more prepared you are, the greater your chances of a successful trip that lives up to your expectations. That's why it's important to do a bang-up job creating an itinerary, arranging transportation and tackling the brass tacks before you're off to the Continent. The following simple steps will help you engineer a well-planned escape to Europe -- so you can spend less time worrying about your travel arrangements and more time staring at pictures of castles and men in kilts. If you don't have a passport, it will take four to six weeks from the time of application for you to receive one. For more information:

Wedding Trends for Stylish + Creative Brides - StumbleUpon If you loved the beautiful DIY wedding this morning and Nata’s gorgeous paper flower bouquets, you are in luck as Nata is sharing how she crafted them with us! She was inspired by a template created by Morgan Levine on Martha Stewart (as was I in the flowers I created for this styled shoot). I just love that this basic idea has inspired different brides to create their own version of giant paper flowers – you might remember these equally awesome giant paper flowers from this wedding I shared last year. :) Thanks so much Nata for sharing how you created your giant pink paper rose + special thanks to Studio Castillero for the photos of the DIY + her wedding!

How Lock Picking Works" Most people carry five to 10 keys with them whenever they go out. On your key ring you might have several keys for the house, one or two more for the car and a few for the office or a friend's house. Your key ring is a clear demonstration of just how ubiquitous lock technology is: You probably interact with locks dozens of times every week. The main reason we use locks everywhere is that they provide us with a sense of security. Most Beautiful Villages Around The World photo Popeye Village, is a group of rustic and ramshackle wooden buildings located at Anchor Bay in the north-west corner of the Mediterranean island of Malta. Photo by: Mosin Village on the bank of the Niger river, Mali. Photo by: Yann Arthus-Bertrand Hidden mountain village in Southern China. Photo by: Christian Ortiz