12 of the World’s Most Mysterious Monuments & Ruins 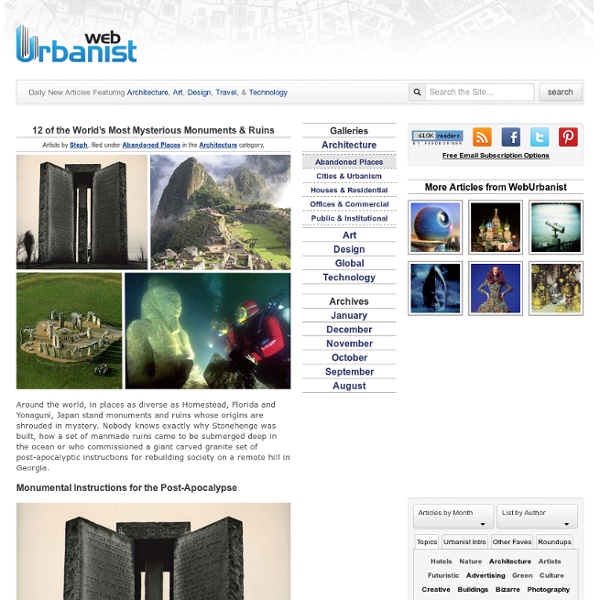 12 of the World’s Most Mysterious Monuments & Ruins Article by Steph, filed under Abandoned Places in the Architecture category. Around the world, in places as diverse as Homestead, Florida and Yonaguni, Japan stand monuments and ruins whose origins are shrouded in mystery. Nobody knows exactly why Stonehenge was built, how a set of manmade ruins came to be submerged deep in the ocean or who commissioned a giant carved granite set of post-apocalyptic instructions for rebuilding society on a remote hill in Georgia. Monumental Instructions for the Post-Apocalypse (images via: Wired) On a barren knoll in northeastern Georgia stands one of the world’s most bizarre and mysterious monuments. Lake Michigan Stonehenge (image via: io9) A group of researchers using sonar to look for shipwrecks at the bottom of Lake Michigan got quite a surprise when they found what appears to be an ancient Stonehenge-like structure 40 feet beneath the surface of the water. Underwater Ruins in Japan (images via: Hottnez) Related:  pmw

The Mysterious Dancing Forest of Kaliningrad Located on the thin Curonian Spit that splits the Curonian Lagoon from the Baltic Sea, lies one of the strangest natural phenomena on Earth. Known as the Dancing Forest by caretakers of Curonian Spit National Park and as the Drunken Forest, by locals, this unusual pine forest is made of trees of various shapes, most of them twisted in circles and spirals, along the ground. According to tourists, the Dancing Forest looks more like a site near Chernobyl, with 20-year-old pines tied into natural knots and loops, like lumpy contortionists. A few years ago, the park manager invited students from local universities to conduct studies, and get to the bottom of the mystery. Since then, several theories emerged, including one suggested by a psychic who said the forest is located on a spot where massive amounts of positive and negative energies collide. Others say the causes are geological, that it must have something to do with the unstable sandy soil. [Photo Credits] [Photo Credits] [Photo Credits]

This free online encyclopedia has achieved what Wikipedia can only dream of The Stanford Encyclopedia of Philosophy may be the most interesting website on the internet. Not because of the content—which includes fascinating entries on everything from ambiguity to zombies—but because of the site itself. Its creators have solved one of the internet’s fundamental problems: How to provide authoritative, rigorously accurate knowledge, at no cost to readers. It’s something the encyclopedia, or SEP, has managed to do for two decades. The internet is an information landfill. Somewhere in it—buried under piles of opinion, speculation, and misinformation—is virtually all of human knowledge. The story of how the SEP is run, and how it came to be, shows that it is possible to create a less trashy internet—or at least a less trashy corner of it. The impossible trinity of information The online SEP has humble beginnings. That makes it positively ancient in internet years. The SEP is neither pre-internet, nor is it ossified. Where other encyclopedias fall short Landfill no more

Japanese Folktales selected and edited by D. L. Contents Return to D. The Two Frogs Once upon a time in the country of Japan there lived two frogs, one of whom made his home in a ditch near the town of Osaka, on the sea coast, while the other dwelt in a clear little stream which ran through the city of Kyoto. So one fine morning in the spring they both set out along the road that led from Kyoto to Osaka, one from one end and the other from the other. They looked at each other for a moment without speaking, and then fell into conversation, explaining the cause of their meeting so far from their homes. "What a pity we are not bigger," said the Osaka frog; "for then we could see both towns from here, and tell if it is worth our while going on." "Oh, that is easily managed," returned the Kyoto frog. This idea pleased the Osaka frog so much that he at once jumped up and put his front paws on the shoulder of his friend, who had risen also. "Dear me!" The Mirror of Matsuyama "What have you hidden in your sleeve?"

Everything Ages Fast (Facebook, Youtube, Twitter, and Skype) — Illusion 360 - The World's most amazing Art, Design, Technology and Video These posters are part of an ad campaign entitled “Everything Ages Fast,” designed by Moma Propaganda and created for client Maximidia Seminars Link via Laughing Squid

Everything You Need to Know About “Click and Drag” If you’re a regular reader of the brilliant xkcd, then you probably got lost in today’s comic, “Click and Drag.” It features three short panels sitting above a seemingly larger, finite panel. However, when you perform the comic’s titular action, click and drag, the larger, bottom panels seems to sprawl on forever in various directions, revealing amusing quips, sad stories, and what is essentially an entire world. There are many impressive facets about “Click and Drag,” such as the panel measuring in at 1.3 terapixels, as well as small community of coders creating applets to help readers better navigate the behemoth. Head on past the break for some stellar info, and maybe set aside some time later today to explore the enormous comic. Comic Size We have some pretty interesting numbers regarding the xkcd comic. Different Ways to View the Image In this image, you can treat the comic like Google Street View, zooming in and out until the actual bits and pieces of the comic are indecipherable.

10 Most Fascinating Castles and Palaces The Potala Palace: Tibet's greatest monumental structure Perched upon Marpo Ri hill, 130 meters above the Lhasa valley, the Potala Palace rises a further 170 meters and is the greatest monumental structure in all of Tibet. In 637 Emperor Songtsen Gampo decided to build this palace on a hill, and the structure stood until the seventeenth century, when it was incorporated into the foundations of the greater buildings still standing today. Mont Saint-Michel: a Medieval Castle on a Small Island Mont St Michel France is situated on a quasi-island on the Normandy coast, near Brittany, which at high tide is almost entirely separated from the mainland. Predjamski Castle: Integrated in a Cave Every castle in the world is unique in some way, no two are the same, but this one --even though it's rather small and humble compared to some-- is probably the only one in the world who is integrated in a cave, precisely the second largest cave system in Slovenia.

MMW Catherynne M. Valente – The Boy Who Lost Fairyland – SFF Book Reviews I drew it out as long as humanly possible, I really did. Any new Cat Valente novel is like Christmas to me, and the only reason I gave in and finished this book (at 4 in the morning, mind you) is the knowledge that two new Valente books will arrive in my mailbox sometime this year. Thanks, Cat, for being prolific and brilliant and full of magic. THE BOY WHO LOST FAIRYLANDby Catherynne M. Valente Published by: Feiwel & Friends, 2015Hardcover: 256 pagesSeries: Fairyland #4My rating: 8,5/10 First sentence: Once upon a time, a troll named Hawthorn lived very happily indeed in his mother’s house, where he juggled the same green and violet gemstones and matching queens’ crowns every day, slept on the same weather-beaten stone, and played with the same huge and cantankerous toad. What? Hawthorn is a troll. Fore more than half the novel, we don’t get to see September at all, but we do meet new characters. But this wouldn’t be a Fairyland book if we didn’t go to visit Fairyland. Other reviews: