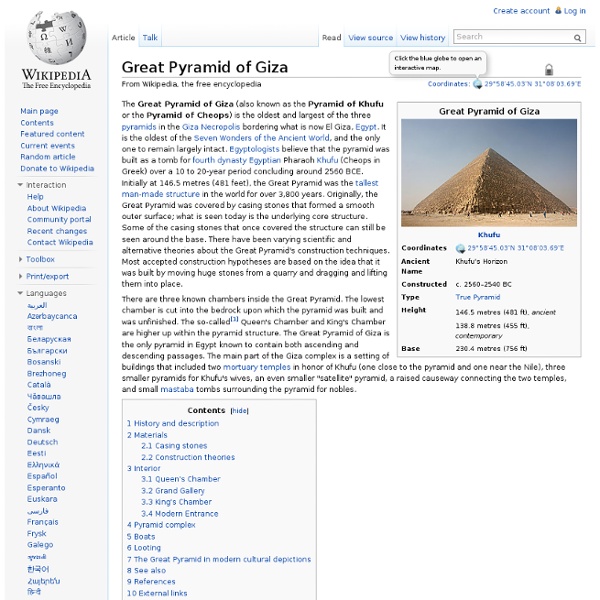 The Great Pyramid of Giza (also known as the Pyramid of Khufu or the Pyramid of Cheops) is the oldest and largest of the three pyramids in the Giza Necropolis bordering what is now El Giza, Egypt. It is the oldest of the Seven Wonders of the Ancient World, and the only one to remain largely intact. Based on a mark in an interior chamber naming the work gang and a reference to fourth dynasty Egyptian Pharaoh Khufu,[1][2] Egyptologists believe that the pyramid was built as a tomb over a 10 to 20-year period concluding around 2560 BC. Initially at 146.5 metres (481 feet), the Great Pyramid was the tallest man-made structure in the world for over 3,800 years. Originally, the Great Pyramid was covered by casing stones that formed a smooth outer surface; what is seen today is the underlying core structure. There are three known chambers inside the Great Pyramid. Transparent view of Khufu's pyramid from SE. History and description[edit] Materials[edit] Casing stones[edit] Casing stone Related:  places/man made constructions

Bibliotheca (Pseudo-Apollodorus) The Bibliotheca (Ancient Greek: Βιβλιοθήκη, Bibliothēkē, "library") is a compendium of myths and heroic legends, arranged in three books, generally dated to the first or second centuries AD.[1] It was known traditionally as the Library of Apollodorus, but the attribution is now regarded as false. The Bibliotheca has been called "the most valuable mythographical work that has come down from ancient times".[2] An epigram recorded by Photius expressed its purpose: It has the following not ungraceful epigram: 'Draw your knowledge of the past from me and read the ancient tales of learned lore. Look neither at the page of Homer, nor of elegy, nor tragic muse, nor epic strain. Seek not the vaunted verse of the cycle; but look in me and you will find in me all that the world contains'.[3] The brief and unadorned accounts of myth in the Bibliotheca have led some commentators to suggest that even its complete sections are an epitome of a lost work. The first mention of the work is by Photius.

Colossus of Rhodes The Colossus of Rhodes, as depicted in an artist's impression of 1880. Siege of Rhodes[edit] In the late 4th century BC, Rhodes, allied with Ptolemy I of Egypt, prevented a massive invasion staged by their common enemy, Antigonus I Monophthalmus. Construction[edit] The construction began in 292 BC. The Colossus of Rhodes as imagined in a 16th-century engraving by Martin Heemskerck, part of his series of the Seven Wonders of the World. To you, o Sun, the people of Dorian Rhodes set up this bronze statue reaching to Olympus, when they had pacified the waves of war and crowned their city with the spoils taken from the enemy. Modern engineers have put forward a plausible hypothesis for the statue construction, based on the technology of those days (which was not based on the modern principles of earthquake engineering), and the accounts of Philo and Pliny who both saw and described the remains.[7] The base pedestal was at least 60 feet (18 m) in diameter and either circular or octagonal. Sources

Stonehenge Archaeologists believe it was built anywhere from 3000 BC to 2000 BC. Radiocarbon dating in 2008 suggested that the first stones were raised between 2400 and 2200 BC,[2] whilst another theory suggests that bluestones may have been raised at the site as early as 3000 BC.[3][4][5] The surrounding circular earth bank and ditch, which constitute the earliest phase of the monument, have been dated to about 3100 BC. The site and its surroundings were added to the UNESCO's list of World Heritage Sites in 1986 in a co-listing with Avebury Henge. It is a national legally protected Scheduled Ancient Monument. Archaeological evidence found by the Stonehenge Riverside Project in 2008 indicates that Stonehenge could have been a burial ground from its earliest beginnings.[8] The dating of cremated remains found on the site indicate that deposits contain human bone from as early as 3000 BC, when the ditch and bank were first dug. Etymology Early history Plan of Stonehenge in 2004. Stonehenge 1. Folklore

Lucy the Elephant Elephant hotel redirects here. For the National Historic Landmark located in Somers, New York, see Elephant Hotel. Lucy the Elephant is a six-story elephant-shaped example of novelty architecture, constructed of wood and tin sheeting in 1881 by James V. Today, Lucy is a tourist attraction. 1800s[edit] In 1881, the U.S. Lafferty brought real estate customers up a narrow spiral staircase from within the elephant's body to the howdah, where he could point out real estate parcels available for sale.[5] Lucy's head shape identifies the building as an Asian Elephant, and its tusks as a male. The structure was sold to Anton Gertzen of Philadelphia in 1887 and remained in the Gertzen family until 1970. Lafferty built at least two more elephant-shaped buildings, though neither survives. 1900s[edit] Over the years, Lucy had served as a restaurant, business office, cottage, and tavern (the last closed by Prohibition). By the 1960s, Lucy had fallen into disrepair and was scheduled for demolition.

Pan-American Highway The Pan American Highway from Prudhoe Bay, Alaska to Ushuaia, Argentina, with selected official and unofficial routes shown through the U.S.A. and Canada. The Pan-American Highway (Portuguese: Rodovia / Auto-estrada Pan-americana, Spanish: Autopista / Carretera / Ruta Panamericana) is a network of roads measuring about 48,000 kilometres (30,000 mi) in total length, except for a rainforest break of approximately 100 km (60 mi), called the Darién Gap, the road links almost all of the mainland nations of the Americas in a connected highway system. According to Guinness World Records, the Pan-American Highway is the world's longest "motorable road". However, because of the Darién Gap, it is not possible to cross between South America and Central America by traditional motor vehicle. Jake Silverstein, writing in 2006, described the Pan-American Highway as "a system so vast, so incomplete, and so incomprehensible it is not so much a road as it is the idea of Pan-Americanism itself".[1]

Ancient Egyptian technology Ancient Egyptian depiction of women engaged in mechanical rope making, the first graphic evidence of the craft, shown in the two lower rows of the illustration Technology in Dynastic Egypt[edit] Significant advances in ancient Egypt during the dynastic period include astronomy, mathematics, and medicine. Their geometry was a necessary outgrowth of surveying to preserve the layout and ownership of farmland, which was flooded annually by the Nile river. The 3,4,5 right triangle and other rules of thumb served to represent rectilinear structures, and the post and lintel architecture of Egypt. Paper and writing[edit] A section of the Egyptian Book of the Dead, which is written and drawn on papyrus The word paper comes from the Greek term for the ancient Egyptian writing material called papyrus, which was formed from beaten strips of papyrus plants. Egyptian hieroglyphs, a phonetic writing system, served as the basis for the Phoenician alphabet from which later alphabets were derived.

the Tricorder project - Science Tricorder Mark 2 The Science Tricorder Mark 2 was a wonderful adventure of discovery to develop. It's my pleasure to be able to share it with you. To introduce you to the Tricorder project, I'd like to begin with a story from the development of the very first Tricorder that I built. More educational discoveries came quickly — from finding all the heat leaks from different building materials in my graduate student apartment in a century home, to how much humidity is exhaled in a breath. Again, it is my pleasure to be able to share this with you. Sensors The Science Tricorder Mark 2 prototype sensor board contains ten different sensing modalities, organized into three main categories: atmospheric sensors, electromagnetic sensors, and spatial sensors. The sensing modalities and specific sensors used on this device, as well as some approximate summary specifications, are as follows: Sensiron SHT11 Atmospheric Temperature and Humidity -40°C to +120°C, ± 0.5°C accuracy ± 0.1°C repeatability Hardware

Sundial SSW facing, vertical declining sundial on Moot Hall, Aldeburgh, Suffolk, England. A combined analemmatic-equatorial sundial in Ann Morrison Park in Boise, Idaho, 43°36'45.5"N 116°13'27.6"W A sundial is a device that tells the time of day by the position of the Sun. Introduction[edit] There are different types of sundials. The shadow-casting object, known as a gnomon, may be a long thin rod, or other object with a sharp tip or a straight edge. With sundials using light to indicate time, a line of light may be formed by allowing the sun's rays through a thin slit or focusing them through a cylindrical lens. Sundials differ in their portability and their need for orientation. Sundials indicate the local solar time, unless corrected for some other time. First, the orbit of the Earth is not perfectly circular and its rotational axis not perfectly perpendicular to its orbit. Apparent motion of the Sun[edit] Top view of an equatorial sundial. [citation needed] History[edit] Terminology[edit]