The Mysterious Dancing Forest of Kaliningrad 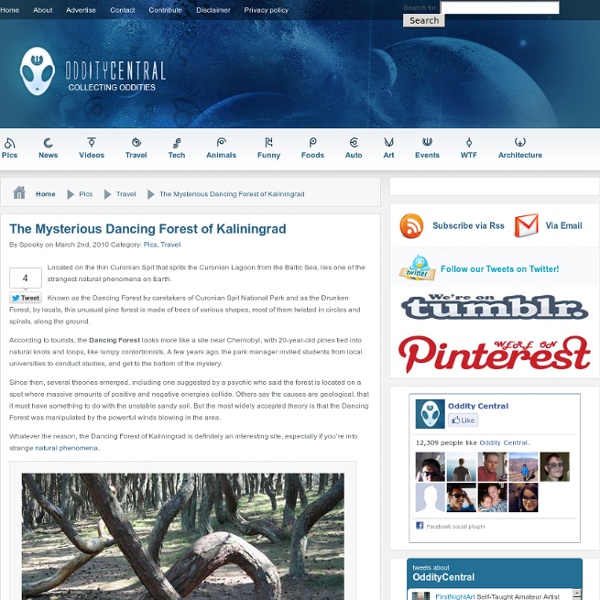 Located on the thin Curonian Spit that splits the Curonian Lagoon from the Baltic Sea, lies one of the strangest natural phenomena on Earth. Known as the Dancing Forest by caretakers of Curonian Spit National Park and as the Drunken Forest, by locals, this unusual pine forest is made of trees of various shapes, most of them twisted in circles and spirals, along the ground. According to tourists, the Dancing Forest looks more like a site near Chernobyl, with 20-year-old pines tied into natural knots and loops, like lumpy contortionists. A few years ago, the park manager invited students from local universities to conduct studies, and get to the bottom of the mystery. Since then, several theories emerged, including one suggested by a psychic who said the forest is located on a spot where massive amounts of positive and negative energies collide. Whatever the reason, the Dancing Forest of Kaliningrad is definitely an interesting site, especially if you’re into strange natural phenomena. Related:  Foreign Places We want to Go

best animal photobombs ever… | clayzmama says…… Photobomb - (verb) to drop into a photo unexpectedly. An otherwise normal photo that has been ruined or spoiled by someone who was not supposed to be in the photograph. hahaha! so THAT’S why I love cats!! via www.buzzfeed.com Like this: Like Loading... Filed under animals, art, family, funny happenings, life Tagged as animals, camera, cats, dogs, funny, horses, Kodak moments, pets, photobomb, Photograph, photography, pictures

The Other Mystery of Easter Island Moai statues Easter Island is branded into popular consciousness as the home of the mysterious and towering moai statues, but these are not the only curiosity the South Pacific island holds. Where the moai are fascinating for their unknown purpose and mysterious craftsmen, the island's lost language of Rongorongo is equally perplexing. The unique written language seems to have appeared suddenly in the 1700s, but within just two centuries it was exiled to obscurity. Known as Rapa Nui to the island's inhabitants, Rongorongo is a writing system comprised of pictographs. In 1864, Father Joseph Eyraud became the first non-islander to record Rongorongo. Some time later, Bishop Florentin Jaussen of Tahiti attempted to translate the texts. In 1886 Paymaster William Thompson of the ship USS Mohican became interested in the pictographic system during a journey to collect artifacts for the National Museum in Washington. An Indus valley connection? A Rongorongo Tablet

Wild Scenics Pictures [ View fewer images per page ] Click here to show (or hide) search and display options [ For a large image and details: click on photo to stay in current window, click on photo ID to open new window.] Silencio 55 incredible examples of photo manipulation We present collection of 55 incredible examples of photo manipulation. Some of them... you may know already, but another ones... could be new for you. What I'm sure about... all of them are simply worth of your attention.

Magical Uba Jabuticaba Tree 99 Excellent Examples of Forced Perspective Photography | Photography Forced perspective is a technique that employs optical illusion to make an object appear farther away, closer, larger or smaller than it actually is. It is used primarily in photography, filmmaking and architecture. It manipulates human visual perception through the use of scaled objects and the correlation between them and the vantage point of the spectator or camera. There are many ways to attack photography and some are much more expensive than others. When it comes to inspiration then there is no limitation on resources. You may be interested in the following related articles as well. Feel free to join us and you are always welcome to share your thoughts that our readers may find helpful. Don’t forget to and follow us on Twitter — for recent updates. Brilliant Examples of Forced Perspective Photography Photography can serve as a nice source of inspiration. Further Resources! Find Something Missing?