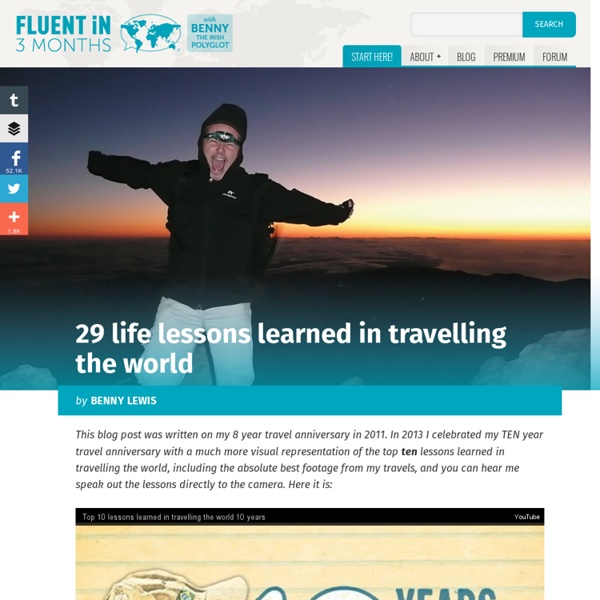 EDIT: This blog post was written on my 8 year travel anniversary in 2011. THIS year (2013) I celebrated my TEN year travel anniversary with a much more visual representation of the top ten lessons learned in travelling the world, including the absolute best footage from my travels, and you can hear me speak out the lessons directly to the camera. Here it is: If you liked this video, please copy and paste this: http://www.youtube.com/watch?v=4RtGmqaM3Zo

Mind-Blowing Illusion Makes Water Freeze in Mid-Air This Video from Youtube user Brusspup shows you how to do a cool science experiment from home that will make water appear to freeze in mid-air. The sound waves from the speaker will cause the water droplets to fall in a uniform pattern. Combine that with a camera that follows the same frequency in frames per second, and a picture is taken at a time when a new droplet is in the same spot. The effect is that the same droplet is frozen in mid air, when really it is 24 new droplets in the exact same spot. 40 Ways to Feel More Alive “I don’t believe people are looking for the meaning of life as much as they are looking for the experience of being alive.” ~Joseph Campbell As I write this, I am two hours away from my first weekly acting class in Los Angeles. I’ve been here for almost two years now, and though I loved Community Theater as a kid, I never so much as researched acting classes until a couple weeks back. I frequently said I wanted to do it, along with painting classes, which I’m starting next week, but I always made excuses not to start either.

Amazing Places To Experience Around The Globe (Part 1) Preachers Rock, Preikestolen, Norway Blue Caves - Zakynthos Island, Greece Skaftafeli - Iceland Plitvice Lakes – Croatia Crystalline Turquoise Lake, Jiuzhaigou National Park, China Four Seasons Hotel - Bora Bora 20+ awesome travel jobs and how to get them 1. Freelance writer / photographer This may mean travel writer, but it doesn’t have to. Let’s say you were a banker; why not start submitting articles to finance mags and journals? The point is to become location independent, and you don’t have to write about travel to do so.

Clean Up and Organize Your Music Library This Weekend Whitson, I've followed LH for years now. Your articles on how to fix your music library are great. But, would you ever consider starting your music library over? An Essay by Einstein "How strange is the lot of us mortals! Each of us is here for a brief sojourn; for what purpose he knows not, though he sometimes thinks he senses it. But without deeper reflection one knows from daily life that one exists for other people -- first of all for those upon whose smiles and well-being our own happiness is wholly dependent, and then for the many, unknown to us, to whose destinies we are bound by the ties of sympathy. A hundred times every day I remind myself that my inner and outer life are based on the labors of other men, living and dead, and that I must exert myself in order to give in the same measure as I have received and am still receiving... "I have never looked upon ease and happiness as ends in themselves -- this critical basis I call the ideal of a pigsty. The ideals that have lighted my way, and time after time have given me new courage to face life cheerfully, have been Kindness, Beauty, and Truth.

10 Weird and Mysterious Places on Earth digg 1. Mystery Spot Mystery Sport is a tourist attraction near Santa Cruz, California, famous because of its disrespect to the laws of physics and gravity. The odd cabin, although seems like lying on flat ground, makes those who enter inside swinging all the time. The most probable theory that tries to explain this says that it’s all about “tilt-induced visual illusion.

So You've Graduated from College, Now What? An update to this post is here. With graduation season wrapping up, I’m remembering my post-college days in 2000, just after the “dot com” bubble burst and suddenly all those folks who flocked to Seattle and Silicon Valley were unemployed, fresh out of school and totally screwed. Ten years later, are things much different? This spring, I’ve gotten a number of emails essentially asking the same question: “I want to wait out the bad economy, do some traveling, but I’m a broke-ass college student… what should I do?” If you want to spend your year after college traveling – but you have no money saved — here’s what I would do” 1. Boston - Dispatchwork Ever wondered what Boston looks like? Well, I did, and from what I can tell by looking at these pictures, I think it is worth adding it on the "places-to-see" list. Fish McGill & Dave Tolmie built this little house in the curb. I suppose, it would be alright if I asked for a place to stay there - so, please reserve the room on the ground floor for me - the one with the green window-blinds!

How You Can Make Good Use Of Your Old Machines Almost everyone reading the articles on this site will have spare computers languishing about. The rapid growth and improvements in hardware means that we cycle through a whole machine in only a few years. If you have spare machines and parts languishing about, you can put them to good use! In this article I have outlined some of the purposes your old hardware can serve. Like the article? Be sure to subscribe to our RSS feed and follow us on Twitter to stay up on recent content.