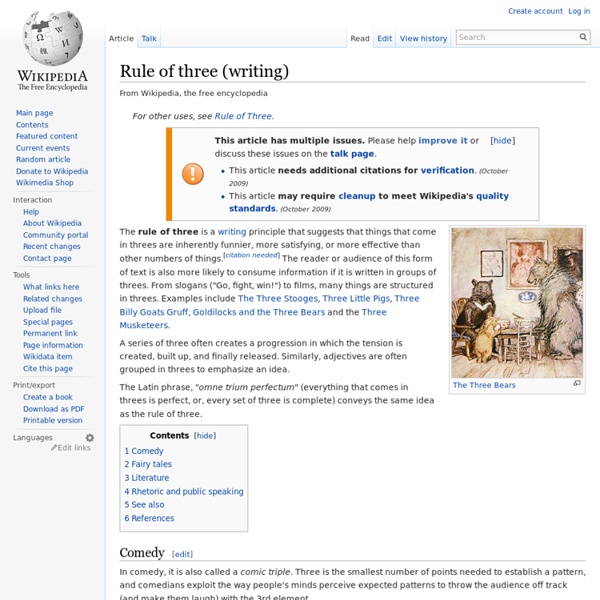 The rule of three is a writing principle that suggests that things that come in threes are inherently funnier, more satisfying, or more effective than other numbers of things.[citation needed] The reader or audience of this form of text is also more likely to consume information if it is written in groups of threes. From slogans ("Go, fight, win!") to films, many things are structured in threes. Examples include The Three Stooges, Three Little Pigs, Three Billy Goats Gruff, Goldilocks and the Three Bears and the Three Musketeers. A series of three often creates a progression in which the tension is created, built up, and finally released. The Latin phrase, "omne trium perfectum" (everything that comes in threes is perfect, or, every set of three is complete) conveys the same idea as the rule of three. In comedy, it is also called a comic triple. Snow White receives three visits from her wicked stepmother In many tales, three tasks must be performed to reach a certain goal. Related:  How To

Cabinet of curiosities "Musei Wormiani Historia", the frontispiece from the Museum Wormianum depicting Ole Worm's cabinet of curiosities. Cabinets of curiosities (also known as Kunstkabinett, Kunstkammer, Wunderkammer, Cabinets of Wonder, and wonder-rooms) were encyclopedic collections of objects whose categorical boundaries were, in Renaissance Europe, yet to be defined. Modern terminology would categorize the objects included as belonging to natural history (sometimes faked), geology, ethnography, archaeology, religious or historical relics, works of art (including cabinet paintings), and antiquities. History[edit] Fold-out engraving from Ferrante Imperato's Dell'Historia Naturale (Naples 1599), the earliest illustration of a natural history cabinet A corner of a cabinet, painted by Frans II Francken in 1636 reveals the range of connoisseurship a Baroque-era virtuoso might evince Cabinets of curiosities would often serve scientific advancement when images of their contents were published. England[edit]

Narrative and Referential Activity - The Referential Process Kristin Nelson Narrative is a discourse form used in all languages for retelling past episodes, whether recalled or imagined. It develops throughout childhood and is part of all adult language speakers’ unconscious linguistic competence. Universal Story Structure: Cross-linguistic and historical studies have found that spontaneous oral narratives, or stories, exhibit a discourse grammar distinct from that of “here-and-now” speech. Even the briefest account of the past qualifies as a story if it contains a Complicating Action section—at least two sentences in the simple past tense, spoken in chronological order, that is in order of remembered events (Labov, 1997). Story-now vs. As Fleischman (1990, p. 125) points out, stories “are intrinsically structured with two time frames: the time of the telling of the story and the time during which the events of the story are assumed to have taken place.” Narrative as a Defensive Indicator: Relationship between RA and Narrative: Bohbot, V. Chafe, W.

Persuasive Writing - Emotional vs Intellectual Words I have written about persuasive writing in an article where I discuss Ethos, Logos, Pathos. Persuasive writers use words to convince the reader to listen or to act. I found this useful list of words in an interesting article called Common words that suck emotional power out of your content by John Gregory Olson. He explains how words have emotions attached to them, and that you should choose the correct ones for the response you want to elicit from your reader. Use these words if you want to get an emotional, rather than an intellectual, response from your readers. Click on the link to read the full article. by Amanda Patterson © Amanda Patterson

Writing Writing with a pen Writing is a medium of communication that represents language through the inscription of signs and symbols. In most languages, writing is a complement to speech or spoken language. Writing is not a language but a form of technology. Within a language system, writing relies on many of the same structures as speech, such as vocabulary, grammar and semantics, with the added dependency of a system of signs or symbols, usually in the form of a formal alphabet. As human societies emerged, the development of writing was driven by pragmatic exigencies such as exchanging information, maintaining financial accounts, codifying laws and recording history. Means for recording information[edit] H.G. Writing systems[edit] The major writing systems – methods of inscription – broadly fall into four categories: logographic, syllabic, alphabetic, and featural. Logographies[edit] A logogram is a written character which represents a word or morpheme. Syllabaries[edit] Alphabets[edit]

Spiral Ring Copper Wire Ring Czech Glass Red by StonetreeJewelry Patterns in nature Natural patterns form as wind blows sand in the dunes of the Namib Desert. The crescent shaped dunes and the ripples on their surfaces repeat wherever there are suitable conditions. Patterns in nature are visible regularities of form found in the natural world. These patterns recur in different contexts and can sometimes be modelled mathematically. In the 19th century, Belgian physicist Joseph Plateau examined soap films, leading him to formulate the concept of a minimal surface. Mathematics, physics and chemistry can explain patterns in nature at different levels. History[edit] In 1202, Leonardo Fibonacci (c 1170 – c 1250) introduced the Fibonacci number sequence to the western world with his book Liber Abaci.[5] Fibonacci gave an (unrealistic) biological example, on the growth in numbers of a theoretical rabbit population.[6] In 1917, D'Arcy Wentworth Thompson (1860–1948) published his book On Growth and Form. Causes[edit] Types of pattern[edit] Symmetry[edit] Trees, fractals[edit]

How Using ARCHETYPES Can Transform Your Character Work « Creative Tips For Writers Many writers shy away from using or studying archetypes or “character types”. They fear they will be writing a stock character – one that lacks originality, depth and complexity. My argument is that there is a lot to be learned about from studying archetypes. And that quite a lot of depth can be learned from studying their purpose in a story. Here’s my argument in a nutshell: Every story has a hero. Q: How can learning about archetypes inform my own work with characters? 1. 2. 3. 4. 5. Q: How can I avoid writing stock types? A: Use the archetypes as a launching point, as inspiration. John Truby, storytelling guru and Author of The Anatomy of a Story states: “Using archetypes as a basis for your characters can give them the appearance of weight very quickly, because each type expresses a fundamental pattern that the audience recognizes, and this same pattern is reflected both within the character and through interaction in the larger society.” Archetypes by Jung 5 Major Archetypes 8) Lover

Intercon O Welcome to the home of Intercon O, the premiere multi-genre Live Action Role Playing (LARP) "convention in the world. Intercon O is the eighteenth Intercon in the Boston area, and we're planning on making it the best ever. If you love to LARP, then Intercon O is the place you want to be. If you're already signed up for Intercon O, or have attended a previous New England Intercon you can login here. There are still openings in these great games! Intercon O is brought to you by NEIL, New England Interactive Literature, as one of the semi-annual Live Action Role-Playing conventions of the Live Action RolePlayers Association. Our goal is to bring together the best LARPs we can find, of all styles and genres, in one weekend, so that you can't help but find a game or three (or five!) Intercons are organized and run by a large group of volunteers, all of whom are LARP enthusiasts. Copyright © 2014, New England Interactive Literature All Rights Reserved

5 Ways Your Brain Sabotages Your Writing... And What To Do About It When we sit at the keyboard, we rely on our brains to help us fill that vast white space with intriguing words, well-rounded characters, and watertight plot twists. Sometimes our brains oblige. But more often, our grey matter tells us that we should check Twitter (because what if our blog post got a retweet from someone important?), that we totally have time to catch up on TV while we eat lunch (because that’s just smart multitasking right there!) Psychologists have identified all sorts of cognitive biases and mental tomfoolery that turn your mind against you every day. Escalation of Commitment Your brain says: “You’ve put so much time and effort into writing this story, it’d be crazy not to finish.” Imagine you’re an eccentric millionaire—probably wearing a monocle—who has spent two years and close to $100,000 creating a desk featuring cool-water sprinklers for those working in hot climes. When the situation is more relatable, Escalation of Commitment kicks in. Solutions: Price: $18.02

List of common misconceptions From Wikipedia, the free encyclopedia This incomplete list is not intended to be exhaustive. This list corrects erroneous beliefs that are currently widely held about notable topics. Arts and culture Food and cooking Roll-style Western sushi. Searing meat does not "seal in" moisture, and in fact may actually cause meat to lose moisture. Legislation and crime Literature The Harry Potter books, though they have broken children's book publishing records, have not led to an increase in reading among children or adults, nor slowed the ongoing overall decline in book purchases by Americans, and children who did read the Harry Potter books were not more likely to go on to read more outside of the fantasy and mystery genres.[21][22][23][24] Music Religion Hebrew Bible The forbidden fruit mentioned in the Book of Genesis is commonly assumed to be an apple,[27] and is widely depicted as such in Western art. Buddhism The historical Buddha was not obese. Christianity Islam Sports Words and phrases History Biology

Throughlines - and How to Use Them! Throughlines - and How to Use Them! By Melanie Anne Phillips Some time ago I described the difference between the two basic forms of story structure with the following phrase: You spin a tale, but you weave a story. The common expression "spinning a yarn" conjures up the image of a craftsperson pulling together a fluffy pile into a single unbroken thread. An appropriate analogy for the process of telling a tale. A tale is, perhaps, the simplest form of storytelling structure. Nonetheless, if one wants to make a point, you need to create a line that leads from one point to another. A story, on the other hand, is a more complex form of structure. In story structure, then, the sequence of events in each individual throughline cannot be random, but must be designed to do double-duty – both making sense as an unbroken progression and also as pieces of a greater purpose. You won’t find the word, "throughline" in the dictionary. Now that we know what a throughline is, how can we use it?

Story Map The Story Map interactive includes a set of graphic organizers designed to assist teachers and students in prewriting and postreading activities. The organizers are intended to focus on the key elements of character, setting, conflict, and resolution development. Students can develop multiple characters, for example, in preparation for writing their own fiction, or they may reflect on and further develop characters from stories they have read. After completing individual sections or the entire organizer, students have the ability to print out their final versions for feedback and assessment. Grades K – 2 | Lesson Plan | Standard Lesson Collaborative Stories 1: Prewriting and Drafting Students hone their teamwork skills and play off each other's writing strengths as they participate in prewriting activities for a story to be written collaboratively by the whole class. Grades K – 2 | Lesson Plan | Unit Comparing Fiction and Nonfiction with "Little Red Riding Hood Text" Sets back to top