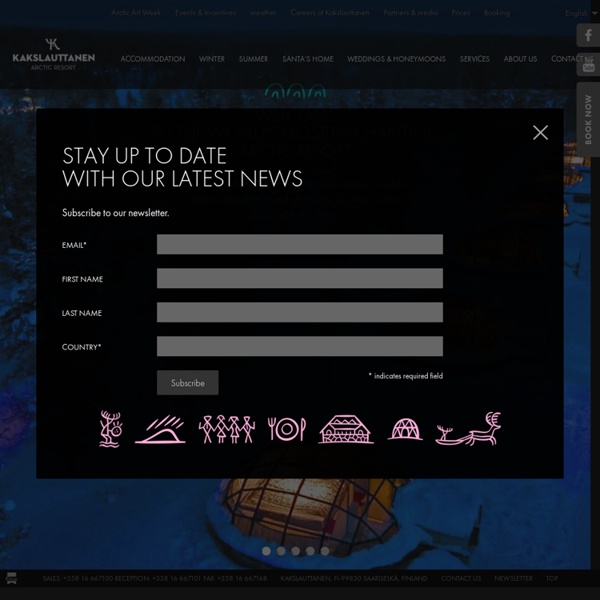 Hotel Kakslauttanen is located in the Saariselkä fell area amidst beautiful Lapland scenery in the vicinity if Urho Kekkonen National Park. We enjoy excellent connections – Highway 4 is nearby and all scheduled buses drive right up to the hotel and Ivalo airport is just 35 kilometres away with a bus transfer straight to the hotel front-door. We have 40 first-class log cabins, out of which five are queen suites, one honeymoon turf chamber and one traditional Lappish farmer log house. The cabins are located sufficiently far apart and each cabin enjoys its own peaceful garden area. We have the world’s largest smoke sauna, equipped with its own restaurant, the main building log house restaurant, two exotic Lapishtent restaurants and a charming snow restaurant. In winter we offer a possibility to stay overnight in a traditional snow igloo or a unique futuristic glass igloo, where you can admire the northern lights in a normal room temperature under the glass ceiling.

Travel - An uncharted underground world At the age of five, Roger Brucker made an important discovery: his new trainers had enough grip to scale his friend’s laundry chute. He promptly climbed from the basement to the first storey bathroom. Regrettably, it was occupied. “I wasn’t invited back,” Brucker chuckled. But he didn’t learn his lesson either. 81 years later, he’s still addicted to exploring the world’s hidden spaces. He just chooses a more prestigious environment.

Charming Town of Spello Italy The small town of Spello is located in Perugia province in Umbria, a landlocked region of central Italy. According to Wikipedia: The densely-inhabited town, built of stone, is of decidedly medieval aspect, and is enclosedin a circuit of medieval walls on Roman foundations.

Dario Taraborelli: The Beauty of LaTeX home › typography › latex There are several reasons why one should prefer LaTeX to a WYSIWYG word processor like Microsoft Word: portability, lightness, security are just a few of them (not to mention that LaTeX is free). There is still a further reason that definitely convinced me to abandon MS Word when I wrote my dissertation: you will never be able to produce professionally typeset and well-structured documents using most WYSIWYG word processors.

Read This Before You Do Another Squat (Then Do Several, After) Squats are cool. Some of you probably disagree with that, but I’m going to do my best to convince you otherwise. For those already onboard the awesome-squat train, I’m about to make your squats safer, smarter and more effective through the geometry of that super-sexy skeleton of yours. Take a tour inside Svalbard's frozen 'doomsday' seed vault Just a few kilometres shy of the North Pole, on the Arctic island of Svalbard, there's a doorway leading into the side of a frozen mountain. Inside, stored deep within the permafrost, lies humanity's best chance of feeding ourselves in a distant, disaster-filled future. Welcome to the Svalbard seed vault, also known as the 'doomsday vault', home to millions of seeds from around the planet. It's one of the most isolated places in the world for good reason, but in this episode of Veritasium, Derek takes us on a rare tour of the icy space. The goal of the Svalbard Seed Vault is pretty simple - to keep the vast range of plants on Earth safe in case anything happens in the future. Despite the doomsday nickname, that 'something' doesn't necessarily have to be a global disaster - it could be anything from climate change to drought that leaves certain parts of society without the means to feed themselves.

25 Secret Small Towns in Europe you MUST Visit 1. Cesky Krumlov, Czech Republic There’s no other town in the world that I am more fond of than the quaint, charming, fairytale-like town of Cesky Krumlov in southern Bohemia. It’s as if you have stepped into a time warp – small cobblestone roads, bridges every which way you look, and no, there’s no McDonalds! It’s a great short day trip from Prague if you find yourself there but for the best experience, visit Krumlov in the summer season and raft down the Vltavy River. 2.

Test your wits: tennis player or cheese? Gone are the days when cheering at a Wimbledon match was as straightforward as reworking a football chant. Phonetically simple champions like Boris Becker, Jimmy Connors and Fred Perry leant themselves to two-syllable marching beats, with short names that could fit neatly onto handmade signs. Indeed, unless you have tickets to centre court, supporting your chosen Wimbledon player can get a lot more complicated. There are 256 players in the Singles draw alone, and so prepare to unleash your enthusiasm for Pennetta - or was it Penamellera? Spanish cows’ cheese Penamellera would, of course, be no match for Italian tennis champion Pennetta, but the hidden vowels and strings of consonants dominating Wimbledon this year have made the Order of Play virtually indistinguishable from an exotic cheese menu. The original dairy-based quiz pits imaginatively named fonts against more unusual cheeses in the much-loved quiz: cheese or font?

10 Things Highly Intuitive People Do Differently Intuition is challenging to define, despite the huge role it plays in our everyday lives. Steve Jobs called it, for instance, "more powerful than intellect." But however we put it into words, we all, well, intuitively know just what it is. Pretty much everyone has experienced a gut feeling -- that unconscious reasoning that propels us to do something without telling us why or how. But the nature of intuition has long eluded us, and has inspired centuries' worth of research and inquiry in the fields of philosophy and psychology.