National Museum of the American Indian 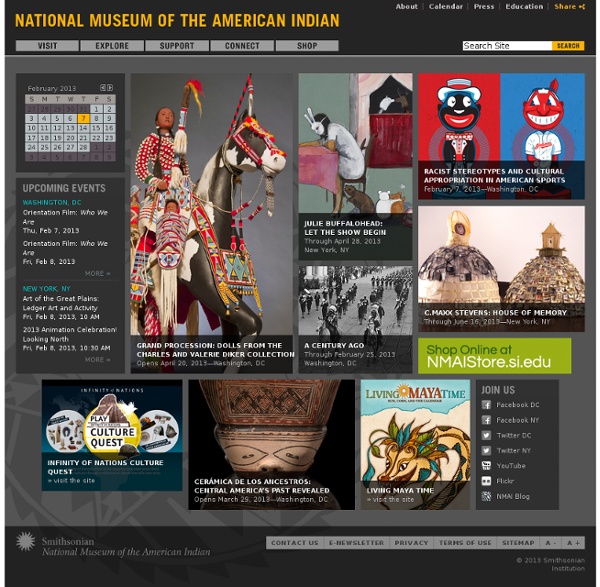 Six Nations Farmers Market (Onkwawen Tkaienthohseron “Our Garden” The Ontario Federation of Indian Friendship Centres) If your garden group plans on growing the 4 medicines it’s important to grow them in a good way. You can plant the medicines in the ground or in a container; however, you should always use organic growing methods to help to keep them pure and to preserve their healing qualities. The Real History of Black Native Americans Throughout the years many black people have laid claim to Native American heritage, claiming it is responsible for everything from reddish skin tone to straight, long hair. Scholar Henry Louis Gates recently discovered that this is likely not true. The percentage of Native American blood in the typical African American is actually very small — less than 1%.

NCCAH > Traditional Plant Knowledge The living landscapes of Quebec's First Nations: a city garden with global reach in education and researchMarch 2012 - In the middle of Montreal, Syvie Paré can find herself recalling the hunting camps she visited as a child with her Huron grandmother and mother. Thanks to the Montreal Botanical Garden, the Laurentian maple stands of the Huron-Wendat, the tundra of the Inuit, and the taiga of the Cree all come alive in the First Nations Garden, the only garden of its kind in North America. “For me, this place is like a home. It is good for the spirit,” said Ms. Paré, a cultural agent with the Garden. Pain of 'Trail of Tears' shared by Blacks as well as Native Americans Editor's Note: Tiya Miles is chairwoman of the Department of Afro-American and African Studies, and professor of history and Native American studies at the University of Michigan. She is the author of "Ties That Bind: The Story of an Afro-Cherokee Family in Slavery and Freedom" and "The House on Diamond Hill: A Cherokee Plantation Story." She is also the winner of a 2011 "genius grant" from the MacArthur Foundation. By Tiya Miles, Special to CNN

Aboriginal Medicine 2. Nice to Know: Every treatment has a cultural component. Western medicine is founded on science, but we must recognize that this holds no inherent guarantee of quality or efficacy. We teach the importance of evidence-based medicine, but there are many therapies for which we have not yet accumulated evidence of effectiveness, so should you dismiss all therapies that are not yet proven? One suggestion is to proceed with an open but enquiring mind - be sceptical (i.e. question things), but not cynical (i.e. dismiss ideas and find fault with them). Ancient and Historic Games Within the Museum collection are a number of objects used for games played in the past by aboriginal groups in North America. Unlike the Museum collection of Inuit game equipment (which primarily consists of animal bone and leather objects), North American and Canadian First Nation game equipment in the collection are modified copies or manufactured copies of the types of game equipment that were used in the past. In his landmark 846 page book "Games Of North American Indians", Stewart Culin documents and describes hundreds of these games, indicating through text and drawings the type of equipment required for each game and the specific tribes or groups which played each game.

First Nations Outdoor Games The Eastern Woodland region of North America is bordered by: the Subarctic to the north, the Plains to the west, the Southeast to the south, and the Atlantic Ocean to the east. This area includes the Iroquoian (e.g., Mohawk, Oneida, Onondaga, Cayuga, Seneca, Tuscarora) and Algonquian (e.g., Ojibwa, Odawa, Potawatomi, Algonkian, Abenaki, Mi’kmaq) language groups. The information provided here is only a sampling of First Nations games information. We encourage you to learn more about these and other First Nations games and athletes from across North America. For more information visit or write to your nearest Cultural Centre or Museum!

Gulf Islands National Park Reserve - First Nations Culture and Traditional Activities Cowichan woman tying bundle of reedsImage courtesy of Royal BC Museum, BC Archives There are many Coast Salish First Nations who have long and continuous ties to the Gulf Islands. The Coast Salish people have special ties to the environment—a spiritual connection to the land, the earth and the water. The Marked Woman In the early twentieth century, the members of the Osage Nation became the richest people per capita in the world, after oil was discovered under their reservation, in Oklahoma. Then they began to be mysteriously murdered off. In 1923, after the death toll reached more than two dozen, the case was taken up by the Bureau of Investigation, then an obscure branch of the Justice Department, which was later renamed the Federal Bureau of Investigation.