The Rise of the Social Food Truck [INFOGRAPHIC] 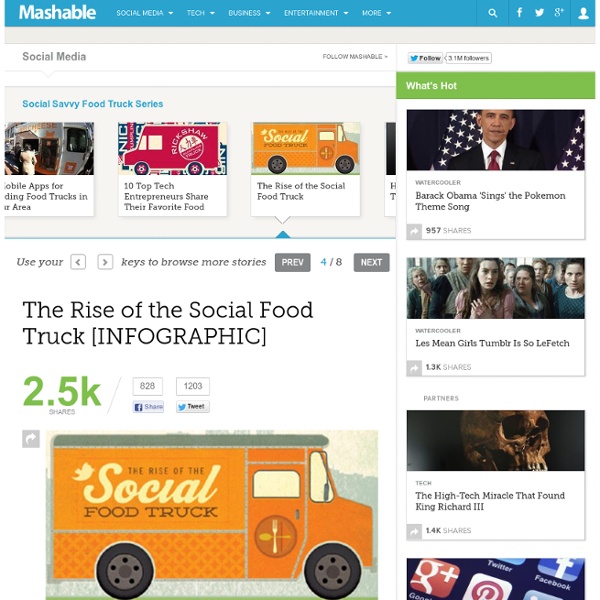 If the average person was told five years ago that she could nab a delicious and buttery lobster roll from a truck without getting food poisoning, she may have scoffed. Nowadays, chefs across the world are delivering some of the most scrumptious, affordable and delightfully fun food straight to the sidewalks — and social streams. Although food trucks existed well before the early 2000s, many sources pinpoint 2008 as the unofficial onset of the food truck phenomenon. Since then, food truck entrepreneurs and chefs alike have used social media to familiarize the world with previously obscure flavors like grits or peppadew. We've put together another tasty little treat for you: a visualization of the social food truck journey. Infographic design by Lindsey McCormack Related:  Places/Restaurants/Clubs • Humanitas

Concrete Blonde - Sydney It seems we really like the work of Sydney's Dreamtime Australia Design as this is the third time we featured their work. Dreamtime director Michael McCann and team are the designers of the Concrete Blonde restaurant recently launched in Potts Point at Kings Cross in Sydney. Earlier, we've covered their Victor Churchill butcher and the Sydney Seafood School. Concrete Blonde is a 100-seat restaurant presided over by chef Patrick Dang who has brought the many nuances of his international experience to the stylish tables of Concrete Blonde. We love the stunning fireplace, the retro comic-book mural and the clever metal "tin-can" wall slots for firewood. The strong focus on metal evokes thoughts of industrial kitchens and huge dining halls, yet the atmosphere manages also to exude inviting warmth. As it should be, the best feature of Concrete Blonde is the food. Being big fans of duck, we had high expectations and they were exceeded.

Top 10 Most Iconic Actresses of Bollywood Bollywood wouldn’t have been where it is today if it wasn’t for our fabulous leading ladies. Since the beginning of Hindi cinema, our actresses have played a major role despite the male actors hogging the limelight. Here’s to 10 such iconic actresses of all time without whom this industry wouldn’t have completed 100 years in style! 10. This lady is often termed as the most beautiful woman on Earth, a fact I’d like to differ with, and there is no dearth of her ardent admirers. 9. She might not be the most beautiful actress around but she sure is one of the most talented ones. 8. Waheeda Rehman has to be one of the most graceful actresses ever. 7. Tragedy and Meena Kumari are synonymous. 6. Nothing spells mysterious as the name Rekha does. 5. If anybody ever wants to learn acting, the late Smita Patil is the one to be idolised. 4. Sridevi, or Bollywood's 'Chandni', was the supposed arch rival of Madhuri in the 90s and rightly so. 3. Nargis was the first lady of Indian cinema. 2. 1.

The Ultimate Guide To Infographics What Are Infographics? I found many definitions of what Infographics are as well as explanations of how they are useful in a variety of settings. Here are a couple of the definitions I liked followed by their sources: Information graphics or infographics are graphic visual representations of information, data or knowledge. And finally, my favorite, an Infographic that explains what is an Infographic: by Hot Butter Studio. These three examples do a nice job of defining what infographics are, but what is the value of an infographic in education? The Value of Visualization from Column Five on Vimeo . The Science Behind Infographics Now that we have a basic understanding of what infographics are, This refers to the part of the video where the narrator asks the viewer to count the number of 7s in the number set. Smiciklas also notes that “Robert Lane and Dr. Infographics and Education They allow students to comprehend, interpret, and analyze complex information in a quick and clear manner.

Alice of Magic World – Tokyo Whimsical places exist all over the world. And We Heart is just the place to discover some of them. Check out this awesome new Tokyo restaurant designed by Fantastic Design Works Co. Alice of Magic World – the fourth in a series of eateries based on Lewis Carroll’s creation – is a decidedly trippy affair, complete with custom made heart shaped chandelier and table, playing card tables and its own forest. There’s even Cheshire Cat tail pizza slices on the menu. via We Heart Share this post

mathbabe 23j37si.png (PNG Image, 1296x864 pixels) - Scaled (74 The Spare Room - Hollywood Bowling alleys are right up there with curling rinks on the list of the most unlikely milieus for anything chic. Yet, at The Spare Room, on the mezzanine level of the Hollywood Roosevelt Hotel, both bowling and the bowling oxfords custom-designed for the newly opened lounge by George Esquivel are now decidedly in. Celebrities and notables are seen nightly at the venue, created by nightlife wizards Med Abrous and Marc Rose and cocktail king Aidan Demarest. The design, by the Los Angeles-based design firm Studio Collective, combines vintage, custom-tailored and new to conjure up an atmosphere of by-gone affluence. There is the gaming parlor vibe, with its two vintage bowling lanes and custom-made sets of dominoes.

Rebranding Valentine's Day Into A Day Of Generosity I never thought I would create a day. And yet, two years ago, with a few friends, I did. It all started back in 2008 on a cold December evening like any other. I was in the New York City subway rushing home. This wasn’t an academic question for me. That day on the subway I started to hear a voice that I had been ignoring. On one level, the decision to dedicate one’s career to trying to improve the lives of people thousands of miles away is grounded in generosity. So that moment walking away from that subway car, I decided to make a change. That brings me back to creating a day. We decided that Valentine’s Day, just three days away, might be the perfect hook. I’ve learned so much since then about generosity. When I cracked open this door to generosity I also saw for the first time that each and every philanthropist I knew, no matter how tough or rigorous or innovative they were in their giving, was deeply grounded in a practice of generosity. And that’s the most generous act of all.

Illegal Burger - Oslo, Norway Illegal Burger, at Møller Gata 23 in Olso, capital of Norway, opened in secrecy late last year but it has since become a hit among those who appreciate a delicious charcoal-grilled burger. Located in a space that used to house a “knock-three-times” club, the fresh-looking burger place still carries some of that mystery, hence the name, too. Illegal Burger does not quite fit in any standard restaurant or club category and it does not look like a burger joint. Illegal Burger was established by three partners, Emil Hesselberg, who is a well-known local restaurateur and owner of the city’s top dance club, The Villa at Møller Gata 25, and two passionate cooks with a skating background, Mike Henriksen and Jostein Kristiansen. The interior and furnishings were designed by Al Coulson with visual communications, including logo and graphics, by The Metric System. - Tuija Seipell.

Einstein's Relativity Affects Aging on Earth (Slightly) Like a vignette from The Twilight Zone, new research shows that you'll age slightly faster standing on a staircase than you do on the floor below. The finding is linked to the strange, time-bending effects of Albert Einstein's theories of relativity, which for the first time have been shown to affect earthbound distances and time frames. (Related: "Einstein's Gravity Confirmed on a Cosmic Scale.") Specifically, Einstein's special theory of relativity predicts that time does not flow at a steady rate, and it can be affected by acceleration. As a result, a clock speeding away from an observer will appear to tick slower than a stationary clock. This theory is the basis of a famous thought experiment known as the twin paradox, in which a twin sibling who travels on a fast-moving rocket ship would return home younger than the other twin. The equations of general relativity also predict that gravity similarly slows down, or dilates, time. Atomic Clocks Show Gravity Slowing Time

Spirito – Martini: From Church To Nightclub Spirito – Martini: From Church To Nightclub Last year, we covered what we consider to be the most beautiful bookstore in the world, a rehabbed church in Maastriche, Netherlands. There’s something about a secularly-revived church that excites us, so we had to share the new Spirito – Martini lounge in Brussels, Belgium. Entrepreneur Franseco Ravo purchased the church and hired the Puresang team of architectural designers to give the church new life as a nightclub.

17 Funny Fail GIFs: Falling Down Never Was So Hilarious (PHOTOS) Tripping, falling, breaking things and other fails are super embarrassing. They are painful when they happen, and painful to even think about. But, let's face it -- they can also be hilarious, especially if you aren't the subject. To help you with your laughing abilities (it's what we're here for, folks) we have provided you with some of the most hilarious GIFs depicting the art of falling down. Loading Slideshow Swinging AwayDodo BirdI was smart enough to get in, why can't I get out? Hide Thumbnails Also on HuffPost: