The Most Alien-Looking Place on Earth 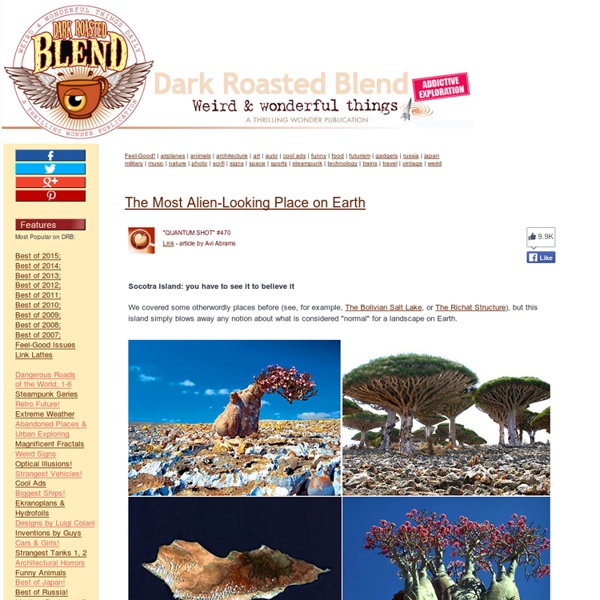 "QUANTUM SHOT" #470Link - article by Avi Abrams Socotra Island: you have to see it to believe it We covered some otherwordly places before (see, for example, The Bolivian Salt Lake, or The Richat Structure), but this island simply blows away any notion about what is considered "normal" for a landscape on Earth. (images credit: Jan Vandorpe, socotra) Imagine waking up on the Socotra Island and taking a good look around you (let's say your buddies pulled a prank on you and delivered you there, and lets also assume that you don't have any hangover from abuse of any substances). The second would be closer to the truth for this island, which is part of a group of 4 islands, has been geographically isolated from mainland Africa for the last 6 or 7 million years. (images credit: dianadrz, Irina Travina) (image credit: socotra) The climate is harsh, hot and dry, and yet - the most amazing plant life thrives there. (image credit: Marco Pavan) Alien-looking plants: H. (image credit: Christian Besnier) Related:  Places

Casey, Illinois Is a Small Town with BIG Tourist Attractions You wouldn’t know it, but the small town of Casey, Illinois is home to eight Guinness World Records. With just 3,000 residents, the Midwestern locale—100 miles away from the nearest big city—boasts a smattering of the world’s largest objects: a rocking chair, mailbox, knitting needles, crochet hook, wind chime, pitchfork, golf tee, and clogs. The attractions are the brainchild of local businessman Jim Bolin. After the recession, he saw the need to boost tourism in Casey and began planning his first sculpture—the giant wind chime. Inspired by childhood memories of listening to them with his grandmother, it took Bolin nearly two years to see the project through. From there, Bolin erected the other objects all fit for a giant. Though these creations are all impressive, there are two standouts in the group. Bolin’s offbeat work—which collectively, has the name Big Stuff in a Small Town—has certainly drawn tourists to Casey.

Wat Phnom The main stupa on Wat Phnom. Wat Phnom (Khmer: វត្តភ្នំ; "Mountain Pagoda") is a Buddhist temple (wat) located in Phnom Penh, Cambodia. It was built in 1373, and stands 27 metres (88.5 ft) above the ground. It is the tallest religious structure in the city. History[edit] Legend relates that Daun Penh, a wealthy widow, found a large koki tree in the river. Then it came to the year of the snake 1437 suggests King Ponhea Yat ordered His Excellency Decho Srei to raise the mount even higher when he finished building the new Royal Palace in the new city he then named Krong Chaktomok Mongkol or simply known as Phnom Penh. Wat Phnom is the center of celebration during Khmer New Year, and Pchum Ben. Architecture[edit] The southwest corner of the vihear and stupa, is a small shrine dedicated to Lady Penh. Culture References[edit] References[edit] See also[edit] Coordinates:

Problem Gambling Bill Maher | Calls Out Oprah | Merry Christmas Bill Maher, host of HBO‘s Real Time, and notorious religious nonbeliever, taped a harsh and hilarious “Christmas message” for his website that served as a damning critique of all Americans and of the one media figure most are too scared to attack: Oprah Winfrey. Calling Oprah’s “Favorite Things” episode “one of the most deeply disturbing things I’ve ever seen on television” was just the beginning of Maher’s memorably “cheerful” message. Maher used Oprah’s audience as the prime example for his thesis that the real religion in America is greed and is “what at the core is so rotten about this country.” Many find Maher’s “humor” offensive, especially towards people of faith, but if you step back and view Maher as a social commentator, merely trying to improve society then maybe you too could appreciate Maher’s willingness to be politically incorrect and go after anyone and everyone to make a point. Maher concluded: This is why everything in America gets sucked down a hole.

The village where men are banned | Global development Jane says she was raped by three men wearing Gurkha uniforms. She was herding her husband’s goats and sheep, and carrying firewood, when she was attacked. “I felt so ashamed and could not talk about it to other people. They did terrible things to me,” says Jane, her eyes alive with pain. She is 38 but looks considerably older. Jane is a resident of Umoja, a village in the grasslands of Samburu, in northern Kenya, surrounded by a fence of thorns. My arrival is greeted by singing and dancing from the women. The village was founded in 1990 by a group of 15 women who were survivors of rape by local British soldiers. Rebecca Lolosoli is the founder of Umoja and the village matriarch. There are currently 47 women and 200 children in Umoja. Lolosoli is tall and powerfully built, her shaven head adorned with the traditional Samburu beaded ornaments. “If a girl is married at an early age, that girl will not be a competent parent. Memusi is the official greeter. I ask how Seita knew about Umoja.

East LA’s Abandoned Hospital Last year, while scouting for a short film that never came to fruition, some friends and I talked our way inside an empty, run-down hospital in Boyle Heights. The short was supposed to take place in a hospital, but after a few minutes wandering the halls of Linda Vista -- alone and decidedly creeped-out -- it became obvious that there was no way the place would work. It had been closed for twenty years, and it showed: there was dirt caked in layers on walls and mysteriously wet floors; windows were broken and doors hung off their hinges; ceiling tiles had fallen victim to moisture and gravity, and rats had chewed through the walls. We didn't have the money to make Linda Vista look like anything more than a horror movie -- a few of which had actually been shot there over the years. I was only inside for 45 minutes or so, running through the place snapping photos on the fly with a crappy point-and-shoot. Click on photos to see larger sizes. Linda Vista was a railroad hospital.

6 Insane Discoveries That Science Cant Explain We like to feel superior to the people who lived centuries ago, what with their shitty mud huts and curing colds by drilling a hole in their skulls. But we have to give them credit: They left behind some artifacts that have left the smartest of modern scientists scratching their heads. For instance, you have the following enigmas that we believe were created for no other purpose than to fuck with future generations. The Voynich Manuscript The Mystery: The Voynich manuscript is an ancient book that has thwarted all attempts at deciphering its contents. It appears to be a real language--just one that nobody has seen before. Translation: "...and when you get her to put the tennis racket in her mouth, have her stand in a fountain for a while. There is not even a consensus on who wrote it, or even when it was written. Why Can't They Solve It? Could you? Don't even try. As you can imagine, proposed solutions have been all over the board, from reasonable to completely clownshit. Our Guess:

Fantastically Funny Illustrations by Gemma Correll (11 total) - My Modern... Though Gemma Correll's illustrations may look like they're only meant for children, read the text and you'll soon realize that they're actually meant for adults. Her somewhat acerbic sense of humor is felt in every piece and the way she brings to life animals like dogs, cats and dinosaurs will make you giggle with glee. Gemma uses pens for drawing and then scans her images into Photoshop to adjust the color levels. Love how she makes being an outcast surprisingly cool. Update: We got in touch with the talented illustrator after writing this post. How do you come up with your hilarious illustrations? I find inspiration everywhere I go - it's in the people I encounter, the animals I meet and the songs I listen to. What do you like most about being an illustrator? What do you find most challenging? How did you training in art school help you in your professional career? What advice would you give to artists or illustrators just starting out? Thanks for the interview, Gemma. Gemma Correll