50 More of the Most Famous Landmarks on Earth (Part 2) 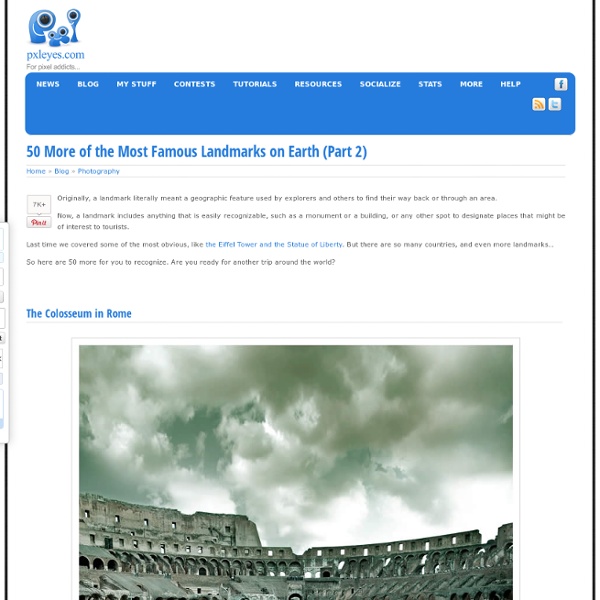 12 Impressive Walled Cities in the World Throughout history city walls were made as protection from the enemy. From very early history to modern times, they have been a near necessity for almost every city. The walled cities could only be entered through city gates which were often closed after a certain curfew each night. Today well preserved walls bring tourist from the whole world to wonder around these medieval walled cities. 12York York is an ancient city in the north of England. 11Harar Harar is an ancient walled city in eastern Ethiopia. 10Taroudant Taroudant is a fascinating and authentic Berber town in the heart of the Souss Valley, with the best preserved city walls in Morocco. 9Toledo An often overlooked gem, Toledo is one of the former capitals of the Spanish Empire. 8Pingyao Pingyao is a small Chinese city renowned for its well-preserved ancient city wall. 7Obidos The town of Óbidos is located on a hill and is encircled by a fortified wall. 6Xi'an 5Itchan Kala 4Avila 3Carcassonne 2Jerusalem 1Dubrovnik

Before I Die What matters most to you Interactive public art project that invites people to share their personal aspirations in public. After losing someone she loved and falling into depression, Chang created this experiment on an abandoned house in her neighborhood to create an anonymous place to help restore perspective and share intimately with her neighbors. The project gained global attention and thanks to passionate people around the world, over 1000 Before I Die walls have now been created in over 70 countries, including Kazakhstan, Iraq, Haiti, China, Ukraine, Portugal, Japan, Denmark, Argentina, and South Africa. The walls are an honest mess of the longing, pain, joy, insecurity, gratitude, fear, and wonder you find in every community, and they reimagine public spaces that nurture honesty, vulnerability, trust and understanding. The Before I Die book is a celebration of these walls and the stories behind them. 2011, New Orleans, LA. Cordoba, Argentina. Najaf, Iraq. Brooklyn, NY.

100 Resources to Research Your Horror Film Join To Bookmark Share Have you ever felt that you have a great horror story and you just need to do a little research to get more ideas, get the time period right or other facts? Maybe you have writer’s block and don’t know where to start. In either case we put together a list of links to help you get all the details right in your scary flick. Crime Urban Legends Ghosts & Folklore Public Domain and Classical Horror Stories Online Screenplays Horror Movie Websites Articles July 19, 2011 Link 4 Comments Related Posts 4 Comments Leave a Reply You must be logged in to post a comment. 10 Enchanting Cities with Colorful Houses Bright colors can change the appearance of a city significantly. When Edi Rama became mayor of Tirana, the capital of Albania, in 2000 he launched a campaign to add color to the post-communist city. Apartment blocks and public buildings were painted in intense colors, transforming the city into a colorful capital with pink, green, blue and red colors. So if colors can brighten up the crumbling tower blocks of Tirana imagine what they can do for some of the prettiest cities around the globe. 10Nyhavn This serene neighborhood facing the Copenhagen harbor in Denmark is a popular area with both locals and tourists. 9Bo-Kaap Bo-Kaap is a picturesque part of Cape Town, South Africa, situated on the slopes of Signal Hill above the city centre. 8Zacatecas The Mexican city of Zacatecas was founded in 1548 to provide shelter to the silver miners and reached the height of its prosperity in the 16th and 17th centuries. 7Kulusuk 6La Boca La Boca is is a working class district of Buenos Aires, Argentina.

15 Most Magical Places in the World Want to share the magic? Tweet or Stumble this article! Wizards, sorcerers, hobbits and goblins. This maybe the stuff of fairy-tales but you can bring magic to life! Visit these breath-taking magical destinations and live out your own travel legend! Travel and make-believe certainly go hand in hand. Whether it’s royal palaces, enchanted forests or magical lagoons, traveling the world can bring your favorite fairy-tales to life! So grab your wand, mount your white horse and take a virtual journey through the 15 most magical places in the world! 1. Pear Biter 2. Fugue 3. pasotraspaso 4. Magical-World 5. Panoramas 6. nutbird 7. robwest jmhullot 9. net_efekt 10. RebelXTious 11. Tambako the Jaguar 12. Macieklew 13. Germanium 14. jurvetson 15. Magical-World Been to any of these places? Post up your comments! Liked this post? Don’t miss out on more magical places, sign up for free article updates below… *(I’d be the Snow Queen!)

15 Least Visited Countries Tourists Should Visit More Often Where were you dreaming of travelling to this summer? Spain, Greece or Turkey? Perhaps somewhere more exotic, such as Morocco or Sri Lanka? While millions of people ponder these tried and true holiday spots, it’s worth sparing a thought for the nations for whom the arrival of a tourist is a genuinely newsworthy event. It might be hard to believe in this globalised world but some countries – whether for reasons of isolation, war or just a lack of obvious things to do – have slid completely off the tourism map. So, if you like the idea of boasting that you’ve been to places your friends haven’t even heard of, we’ve hunted down the world’s 15 least visited countries for you. Begin our countdown of places you probably never thought of going to, finishing with the least visited country of all. 15: Mauritania Image Source: Feargus Cooney/LP Tourists per year: 30,000 Why it’s worth visiting: The dunescapes here are among the most remarkable on the planet. 14: Guinea-Bissau 13: Bhutan 12: Chad

34 Lost Cities Forgotten by Time It’s hard to imagine how an entire city can get lost but that’s exactly what has happened to the lost cities on this list. There are actually many reasons why a city has to be abandoned. War, natural disasters, climate change and the loss of important trading partners to name a few. 34Carthage Located in present-day Tunisia, Carthage was founded by Phoenician colonists and became a major power in the Mediterranean. See also: Tunisia Guide 33Ciudad Perdida Ciudad Perdida (Spanish for “Lost City”) is an ancient city in Sierra Nevada, Colombia, believed to have been founded around 800 AD. See also: Colombia Guide 32Troy Troy is a legendary city in what is now northwestern Turkey, made famous in Homer’s epic poem, the Iliad. See also: Turkey Guide 31Skara Brae Located on the main island of Orkney, Skara Brae is one of the best preserved Stone Age villages in Europe. See also: United Kingdom Guide 30Memphis See also: Egypt Guide 29Caral See also: Peru Guide 28Babylon See also: Iraq Guide 27Taxila 25Timgad

30 Brilliant Typefaces For Corporate Design Advertisement Designing a beautiful, legible typeface is hard work and takes time and patience. The type family has to convey a message clearly and effectively, regardless of the setting in which it is used. Of course, thousands of freely available fonts are out there, and some free fonts are very impressive1. We looked around and researched recently released corporate typefaces that have been frequently recommended, mentioned or discussed on popular typography-related blogs, forums and magazines. Below, you’ll find 35 brilliant new typefaces for corporate design. You may also want to take a look at the following related posts: Please be patient; this page might take some time to load. 1. Bodoni Script Pro6 | PDF specimen7 | Price: €69+ Designed by Panos Vassillou, this typeface was designed with connected characters and capitals with calligraphic elements. 2. Geogrotesque8 | Gallery9 | Price: $50 each Geogrotesque is a semi-modular typeface with a subtle rounded finish. 3. 4. 5. 6. 7.

50 Professional Photos Showing the Wonders and Beauty of Brazil Brazil is the 5th largest country in the world, both as surface and population, and the largest one in South America. Some know about it because of the unique coffee fragrances, others because of the world-wide known Rio de Janeiro carnival and others because of the talents of sport that country offered in the past years. Its topography and climate are very diversified and turn Brazil into a perfect destination for tourists of all kinds and especially artists who are into photography. Its flora and fauna offer endless possibilities for photographers and this showcase will illustrate some examples of it, from high-speed photography, to portraits and wildlife, all from this amazing country, called Brazil! Iguazu Waterfalls Ricardo Jump Janeiro Street Market in Flamengo, Rio de Janeiro Traditional Coffee Rocinha 11 Surui Indians Dunes in Brazil Brazil Pantanal 4949 Brazilian Piglets Brazilian Bird Pantanal 4416 Brazilian Blue Parrot Thunderstorm in Brazil Weird Animal Sunset Over Brazil Danger! Corcovado Lagoa

The 30 Best Films of the Decade We’re all in that humanistic mode of evaluating our lives – coming up on the end of the year and the last time a zero will be the third digit on our calendars. We’re all (from Variety to Cat Fancy) also waxing expert on what films were the best of the best of the best of the past ten years. Which is why there is an unnavigable sea of opinion polluting the internet right now. Neil and I thought, ‘If everyone else is doing it, why can’t we? And why not do it better?” You may ask (since I’m forcing you to rhetorically), “How can giving your opinion be better than everyone else’s tepid version of an almost-arbitrary-seeming list?” I’m glad you asked. Neil and I anticipated this task back in October and began planning what would become far too much work for two people who essentially sit around watching Animal House all day. The algorithm, which we’ve nicknamed Simon, spat out just over 300 films, reducing our master list by 90%. These are The 30 Best Films of the Decade: 30. 29. 28. 26. 25.