The Other Mystery of Easter Island 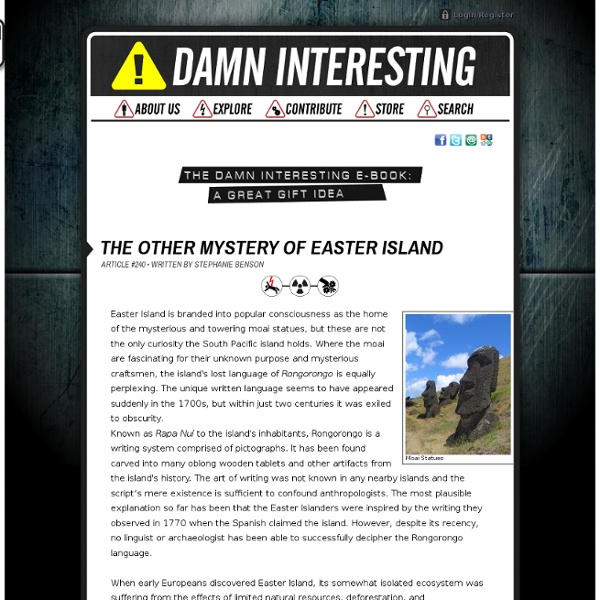 Moai statues Easter Island is branded into popular consciousness as the home of the mysterious and towering moai statues, but these are not the only curiosity the South Pacific island holds. Where the moai are fascinating for their unknown purpose and mysterious craftsmen, the island's lost language of Rongorongo is equally perplexing. The unique written language seems to have appeared suddenly in the 1700s, but within just two centuries it was exiled to obscurity. Known as Rapa Nui to the island's inhabitants, Rongorongo is a writing system comprised of pictographs. It has been found carved into many oblong wooden tablets and other artifacts from the island's history. In 1864, Father Joseph Eyraud became the first non-islander to record Rongorongo. Some time later, Bishop Florentin Jaussen of Tahiti attempted to translate the texts. Thompson was determined, however, and decided that Ure Va'e Iko might be more forthcoming under the influence of alcohol. An Indus valley connection?

Awesome Nature Photos Of Incredible Places Nature photography tends to put a stronger emphasis on the aesthetic value of the photo than other photography genres, such as photojournalism and documentary photography. Apart from this difference, nature photography will always be more surprising than any other type of photography. Nature, with all its resources creates far more beautiful scenery than what a man can create artificially. Kochia Hill, Hitachinaka City, Japan Japanese Tea Field

The 33 Most Beautiful Abandoned Places In The World Many people doesn’t know, and didn’t even heard about these famous abandoned places. Many of these places are really something amazing, but they are also really sad when you take a closer look at them. On the folowing list, you can see abandoned planes, abandoned ships, as well as the abandoned houses, and so many other things, that are really amazing and magnificent. So, check out these amazing abandoned places photos. 1. Christ of the Abyss at San Fruttuoso, Liguria Resources for Primary Source Documents Primary sources are resources that were first-hand created in a given period of time and never undergone any kind of editing or distortion. These sources are multimodal and they come in different forms. They can be artifacts, documents, pictures, recordings, essays, photographs, maps...etc. Now with the globalization of knowledge and the pervasive use of digital media, primary sources become accessible to everybody with an internet connection. However, the search for these materials is akin to a scavenger hunt and hence the importance of having a handy list such as the one below to keep for rainy days. I have been scouring the web for several hours and finally come up with this selection.

Most Beautiful Villages Around The World photo Popeye Village, is a group of rustic and ramshackle wooden buildings located at Anchor Bay in the north-west corner of the Mediterranean island of Malta. Photo by: Mosin Village on the bank of the Niger river, Mali. Photo by: Yann Arthus-Bertrand Hidden mountain village in Southern China. Photo by: Christian Ortiz

Rebuilding Ancient Egyptian Temples in 3D The reconstructions, in this section, give an idea of how these ancient temples might have appeared to ancient eyes. Ancient peoples liked to decorate their buildings and temples with bright colours. Take the Parthenon, in Athens, for example; nowadays we have this vision of those beautiful columns and fabulously carved marbles showing the bare stone, which appeals to our modern aesthetic. However, in ancient times the bare stone was hidden from view because it was all painted in the most brilliant colours. Rebuilding Ancient Egyptian Temples in 3D The mystery of Egyptian cult temples explained, illustrated with videos, photos, drawings and 30 highly detailed computer generated reconstructions.

Africa Travel Memories from explorer Tom Gehreis Memories of My Africa Travel Adventures You ask me if I remember Africa? I don’t just remember it – I relive it every day. When I close my eyes I can smell the herbs that turn the Bushveld into a fragrant bouquet. I can hear the thunder of hoofs, the roar of a lion, the laughs of children. I hear the call of the fish eagle, the call of the wild. The 16 Reasons You Need To Drop Everything And Travel Right Now There’s a characteristic of our generation that can only be described as severe restlessness. I am not specifically referring to the number of friends you have who are prescribed Adderall; although that’s definitely another cultural trend I could discuss in length. What I’m talking about is a restlessness of the soul, the wandering spirit, a culture of nomads. We’ve been bred on this notion that we are going to do it differently than our parents; we’ll be adventurous, experience life to the fullest.

The Thirty Most Picturesque Winter Towns From Around The World Rothenburg ob der Tauber is an incredibly well preserved medieval old town that every winter transforms into something that resembles a fairytale. Mt Buller is one of the few places in Australia that actually see frequent snowfall. This beautifully snow-capped mountain region is popular with bikers, skiers, snowboarders, and hikers. Surrounded by mountain paths, El Chaltén is popular with trekkers during the summer. This Damn Beautiful Autumn - Fall in Photographs You could easily argue that autumn is the most beautiful season of the year. Leaves turn to yellow, orange, and bright shades of crimson. They fall like a shower from the trees, giving us a way to watch the wind dance. They paint the landscape with a blanket of color. Don’t believe me? Take a look at these fall photos and tell me if you’ve ever seen more beautiful sights.