20/11/12: News stories on antibiotics, shrimp bans and Global GAP certification. Since the antibiotics that are used in veterinary medicine and aquaculture belong to the same group of antibiotics as those used in medicines for humans, increased resistance to these medicines will be detrimental to public health. 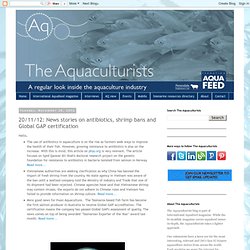 Syed Qaswar Ali Shah's doctoral research project has studied the genetic foundation for resistance to antibiotics in bacteria isolated from salmon fish in Norway. He collected quinolone-resistant isolates of the bacterium Flavobacterium psychrophilum from rainbow trout and equivalent isolates of Yersinia ruckeri from Atlantic salmon. These bacteria are the cause of bacterial coldwater disease in rainbow trout and redmouth disease in salmon respectively. International Aquafeed Newsletter November 2012. 6th International Algae Congress Microalgae have been of major interest for producing biofuels in the last decade. 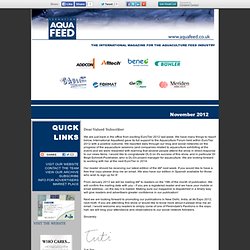 Recently, development and focus was changed towards the use of microalgae in the food, feed, materials and chemical sector as well. Salmon lice case is not proven. A row erupted after St Andrews University claimed 39% of Atlantic salmon deaths were due to parasites, while salmon farmers, represented by the Scottish Salmon Producers Organisation (SSPO), said the figure is 1% to 2%. 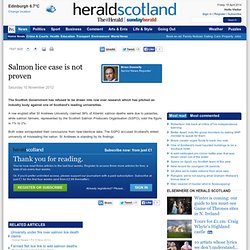 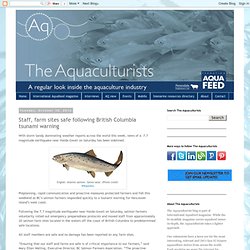 Preplanning, rapid communication and proactive measures protected farmers and fish this weekend as BC’s salmon farmers responded quickly to a tsunami warning for Vancouver Island’s west coast. Following the 7.7 magnitude earthquake near Haida-Gwaii on Saturday, salmon farmers voluntarily rolled out emergency preparedness protocols and moved staff from approximately 20 salmon farm sites located in the waters off the coast of British Columbia to predetermined safe locations. All staff members are safe and no damage has been reported on any farm sites.

“Ensuring that our staff and farms are safe is of critical importance to our farmers,” said Mary Ellen Walling, Executive Director, BC Salmon Farmers Association. Aquaculture 2013 - programme announced. We have just had a sneaky peek at the programme for Aquaculture 2013 in Nashville, USA, February 21-25, 2013. 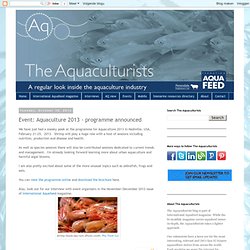 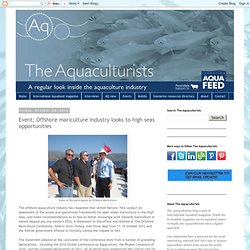 A Statement to this effect was drafted at The Offshore Mariculture Conference, held in Izmir, Turkey, over three days from 17-19 October 2012 and the Turkish government offered to formally convey the request to FAO. The Statement adopted at the conclusion of the Conference drew from a number of preceding declarations – including the 2010 Global Conference on Aquaculture, the Phuket Consensus of 2010, and the Colombo Declaration of 2011, all of which have emphasized the critical role for aquaculture in feeding the world, stimulating economic development, providing employment and reducing existing negative impacts on the marine environment. Shark falls out of the sky. A shark has been rescued after it apparently fell out of the sky onto the 12th hole at a golf course in California, USA. 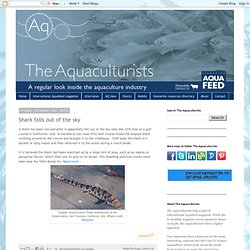 A marshal at San Juan Hills Golf Course found the leopard shark writhing around on the course and brought it to the clubhouse. Staff kept the shark in a bucket of salty water and then returned it to the ocean during a lunch break. It is believed the shark had been snatched up by a large bird of prey, such as an osprey or peregrine falcon, which then lost its grip on its dinner. Two bleeding puncture marks were seen near the fish's dorsal fin. Buhler. 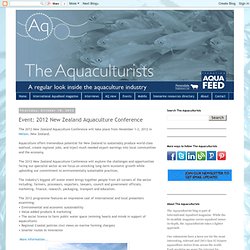 The 2012 New Zealand Aquaculture Conference will explore the challenges and opportunities facing our specialist sector as we focus on unlocking long-term economic growth while upholding our commitment to environmentally sustainable practices. The industry’s biggest off-water event brings together people from all corners of the sector including, farmers, processors, exporters, lawyers, council and government officials, marketing, finance, research, packaging, transport and education. All About Aquaculture: What is aquaculture, anyway? Did You Know? 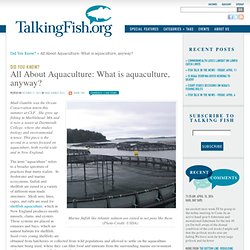 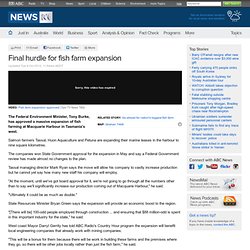 Salmon farmers Tassal, Huon Aquaculture and Petuna are expanding their marine leases in the harbour to nine square kilometres. The companies won State Government approval for the expansion in May and say a Federal Government review has made almost no changes to the plan. Local man raises about 12,000 shrimp in his third year of aquaculture. IAI Poultry and Meat Expo 2012. Venezuela Ends Shark Finning, Creates Protected Area. Washington Pew applauds action to ban shark fishing in critical breeding habitat Resources:Press photos Venezuela set forth a series of measures this week to protect sharks within its waters. Most significantly, commercial shark fishing is now prohibited throughout the 3,730 square kilometers (1,440 square miles) of the Caribbean Sea that make up the popular Los Roques and Las Aves archipelagos, whose pristine beaches and coral reefs make it a diving and fishing attraction.

Special place - The biggest shipping and trading center in China/A place hotly contested by enterprises International city makes your business enjoyment in Shanghai/Gathering place of East-West culture / more than 30,000 restaurants from all around the world. North Sea cod: Is it true there are only 100 left? 29 September 2012Last updated at 19:16 ET By Hannah Barnes & Richard Knight BBC News If recent reports are to be believed, the North Sea cod's days are numbered. But should we believe these reports? What do the experts say about the numbers of fish that are left? The Daily Telegraph recently ran the headline: "Just 100 cod left in the North Sea".