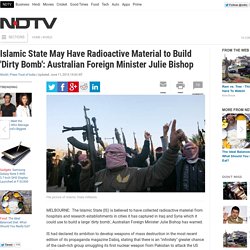 IS had declared its ambition to develop weapons of mass destruction in the most recent edition of its propaganda magazine Dabiq, stating that there is an "infinitely" greater chance of the cash-rich group smuggling its first nuclear weapon from Pakistan to attack the US within a year. Ms Bishop told 'The Australian' that NATO was deeply concerned about the theft of radioactive material. "The insurgents did not just clear out the cash from local banks," she was quoted as saying. In a speech in Perth last week, Ms Bishop warned that the Islamic State may be developing poison-gas weapons. By capturing territory, Islamic State, which is also known as Da'ish, had gained access to materials normally held by governments. Mexico issues alert over stolen and potentially deadly radioactive iridium-192 material. 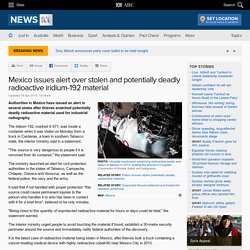 The iridium-192, marked X-571, was inside a container when it was stolen on Monday from a truck in Cardenas, a town in southern Tabasco state, the interior ministry said in a statement. "This source is very dangerous to people if it is removed from its container," the statement said. The ministry launched an alert for civil protection authorities in the states of Tabasco, Campeche, Chiapas, Oaxaca and Veracruz, as well as the federal police, the navy and the army. National Radioactive Waste Management Facility. Radioactive materials bring major benefits to Australian society through their use in medicine, scientific research, industry, agriculture and technological fields. 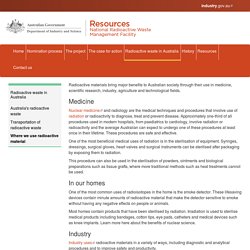 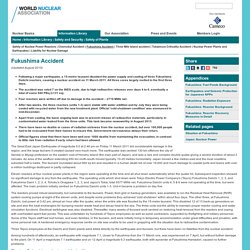 Uses of Radiation. Although scientists have only known about radiation since the 1890s, they have developed a wide variety of uses for this natural force. 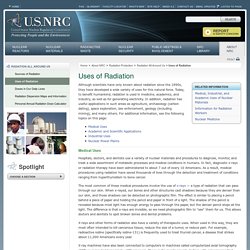 Today, to benefit humankind, radiation is used in medicine, academics, and industry, as well as for generating electricity. In addition, radiation has useful applications in such areas as agriculture, archaeology (carbon dating), space exploration, law enforcement, geology (including mining), and many others. For additional information, see the following topics on this page: Medical Uses Hospitals, doctors, and dentists use a variety of nuclear materials and procedures to diagnose, monitor, and treat a wide assortment of metabolic processes and medical conditions in humans. Naturally Occurring Radioactive Materials NORM. International Nuclear Waste Disposal Concepts: Nuclear Waste : Nuclear Waste Disposal : world-nuclear.org. (Updated March 2015) There have been several proposal for regional and international repositories for disposal of high-level nuclear wastes, and in 2003 the concept received strong endorsement from the head of IAEA.The European Commission is funding studies to to assess the feasibility of European regional waste repositories.Arising from these studies, 14 EU countries resolved to set up a European Repository Development Organisation (ERDO) to collaborate on nuclear waste disposal.Following this a similar initiative is under way for the Middle East and North Africa, and South East Asia is likely to follow.Pangea Resources earlier identified a large area of outback Australia as having appropriate characteristics for deep geological disposal, and hence for an international repository. 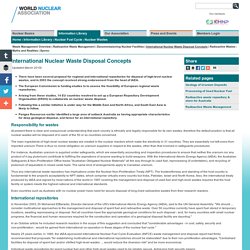 Responsibility for wastes The main ingredients of high-level nuclear wastes are created in the nuclear reactors which make the electricity in 31 countries. International repositories. Nuclear shares of electricity generation. India, China and the Non Proliferation Treaty (NPT) (Updated July 2014) India has a flourishing nuclear power program and plans to have nearly 15,000 MWe of nuclear capacity on line by 2020.China has fast-growing electricity demand and a rapidly-expanding nuclear power program. 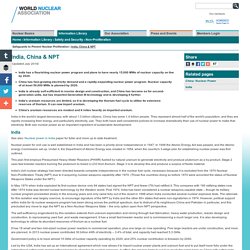 Nuclear capacity of at least 50,000 MWe is planned by 2020.India is already self-sufficient in reactor design and construction, and China has become so for second-generation units, but has imported Generation III technology and is developing it further.India's uranium resources are limited, so it is developing the thorium fuel cycle to utilise its extensive reserves of thorium. It can now import uranium.China's uranium resources are modest and it relies heavily on imported uranium. India is the world's largest democracy, with about 1.3 billion citizens. China has some 1.4 billion people. Australia as the world's nuclear waste dump? Information on proposals to build an international high level nuclear waste dump in Australia Here is Pangea Resources' corporate video which was leaked to Friends of the Earth (UK) in the late 1990s. 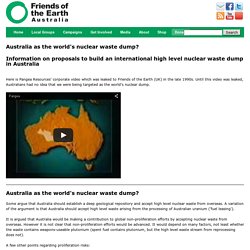 Until this video was leaked, Australians had no idea that we were being targeted as the world's nuclear dump. The Workings of an Ancient Nuclear Reactor. Editor's Note: This article originally appeared in the October 2005 issue of Scientific American. 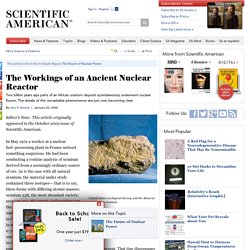 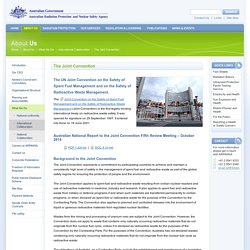 The Joint Convention on the Safety of Spent Fuel Management and on the Safety of Radioactive Waste Management (Joint Convention) is the first legally binding international treaty on radioactive waste safety. It was opened for signature on 29 September 1997. It entered into force on 18 June 2001. Australian National Report to the Joint Convention Fifth Review Meeting – October 2014. Radioactive material leak at New Delhi international airport from medicine shipment, officials say. Posted A radioactive material leak has been detected at New Delhi's international airport on a shipment of nuclear medicine from Turkey, officials say. The incident happened near the cargo area of Turkish Airlines where four cartons containing nuclear medicine material were found to be damaged, an official in the National Disaster Response Force told AFP. Fresh leak of highly radioactive water detected at Fukushima nuclear power plant. Updated Sensors at the Fukushima nuclear plant have detected a fresh leak of highly radioactive water into the sea.

Tokyo Electric Power Co (TEPCO) said the sensors, which were rigged to a gutter that pours rain and ground water at the Fukushima Daiichi plant to a nearby bay, detected contamination levels up to 70 times greater than the already-high radioactive status seen at the plant campus.