A Smarter Pet Food Bowl By The Mind Behind Disney Magicbands. As many as 54% of US dogs are overweight, and that blame is on all of us. 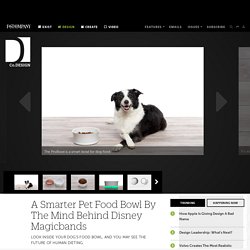 Dogs don’t go shopping. They don’t portion their own meals. It’s the human element that overfeeds a loyal pet and needs retraining. ProBowl, on IndieGogo now, is a smart food bowl that can help you help your dog lose weight. Designed by Matter—which was founded by Max Burton, who worked on early iterations of the Nike+ Fuelband and was largely responsible for the Disney Magicband—the ProBowl is essentially a scale that weighs the food or water you pour in. "You don’t need to know it's ¾ of a cup that you’re pouring in, you’ll just know it's full," Burton says.

The app brings all sorts of additional brains to the operation as well. To put a human on this sort of automatic diet would be beyond difficult. "All of these other holistic fitness solutions require so much effort and time in terms of input. CUJO Is More Than A Web Security Avatar—It's Part Of The Next Wave Of Emotive Tech. In some ways, using a guard dog as a nom de guerre for a connected security device makes perfect sense. 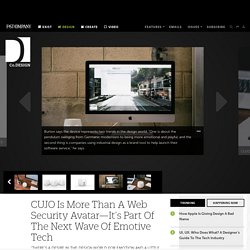 A canine sentry keeps a watchful eye and will howl and snarl if a burglar enters your home, alerting you to a potential threat. Physical intruders and anomalies are easier to detect, but what about hackers and digital breeches? CUJO, a new device designed by the San Francisco innovation firm Matter, tackles network security through a doglike avatar and channels the new wave of Zero UI in the process. Our dwellings are becoming more connected thanks to a fleet of innovative smart home products splashing into the market. Not to sound too alarmist, but anything that connects to your Wi-Fi network is a potential gateway for hackers. Graava Is A Smart Action Cam For Adrenaline Junkies Who Don't Want to Edit Footage.

Think of how your brain makes memories. 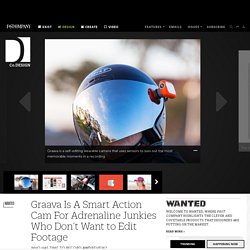 You can recall certain moments with crystal clarity: when your child was born, when you first sampled VR, that epic burrito you had at Chipotle. And other moments—like your commute—are so mundane that you forget them instantly. Graava, a new wearable camera, wants to change the way we record our memories by highlighting only the best ones. While strapping on a GoPro assures you that every memorable moment of your surf trip is caught on film, it also assures that you'll have to wade through hours of floating in the water waiting for that perfect wave to come.

Graava uses artificial intelligence and sensors to infer what you yourself would remember, and crafts a highlight reel from the footage. The San Francisco innovation firm Matter was tapped to design Graava. Wherefore Wearables. Page1of 3< 1 2 3 > Wherefore Wearables Pioneering designers rush to the wearables frontier. 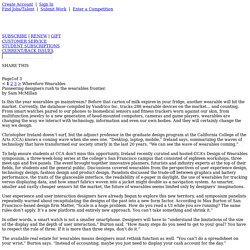 By Sam McMillan Is this the year wearables go mainstream? Before that carton of milk expires in your fridge, another wearable will hit the market. Currently, the database compiled by Vandrico Inc. tracks 288 wearable devices on the market… and counting. From smart watches paired to our phones to biomedical sensors and fitness trackers worn against our skin, from multifunction jewelry to a new generation of head-mounted computers, cameras and game players, wearables are changing the way we interact with technology, information and even our own bodies.

Christopher Ireland doesn’t surf, but the adjunct professor in the graduate design program at the California College of the Arts (CCA) knows a coming wave when she sees one. Max Burton: The Future of Wearable Technology. Design of Wearables. Join us for three weeks of curated panels, meetups, and short-duration workshops taught by industry experts on the CCA San Francisco campus evenings and Saturdays, July 24 through August 14, 2014. 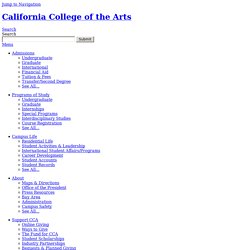 Instructors: M. Instructor: M. Kickstarter Rescues Startups That VCs Won't Touch, But Here's What's Missing. It may seem like we have entered a golden era of product design, in which the world’s most valuable company has built its entire business on a dozen consumer products while heightening our appreciation of the subtleties of industrial design immeasurably. 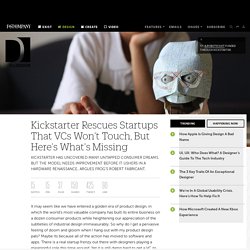 So why do I get a pervasive feeling of doom and gloom when I hang out with my product design pals? Maybe its because all of the action has moved to software and apps. There is a real startup frenzy out there with designers playing a meaningful role this time around. Yet it is still damn hard to get a VC to go along with any startup involving hardware unless you have already locked in distribution with Best Buy or Walmart. When will hardware hit the masses, with MakerBots and 3-D printers on our desktops? The Good 1. Product design is governed by the laws of supply and demand. 2. Now, consumers can look at one image of the Nest thermometer or the Fitbit and fill in all the blanks (while rushing to pre-order). For Cellphones, It's Hip to Be Square. For cellphones, square is the new black. 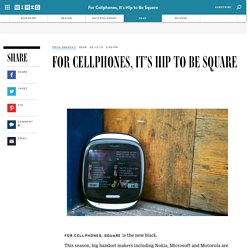 This season, big handset makers including Nokia, Microsoft and Motorola are betting you’ll want to flaunt cute, palm-shaped devices that look more like compact powder cases than brick-shaped mini-tablets. Motorola is likely to introduce a new phone next month called Flipout that will have a 2.8-inch display, a 3.1-megapixel camera and a twist-out keyboard. We haven’t tested it yet, but on looks alone, it’s fabulous, darling. Motorola’s square-shaped phone follows the release of Microsoft’s fresh-looking Kin One earlier this month. When Pixels Dominate Design, Your Hardware Is The Brand. A major takeaway of the recent Samsung/Apple patent dispute: Physical objects have retained their power in the digital age. 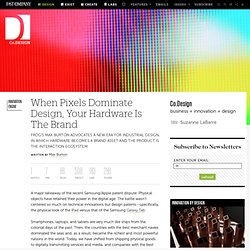 The battle wasn’t centered so much on technical innovations but design patents--specifically, the physical look of the iPad versus that of the Samsung Galaxy Tab. Smartphones, laptops, and tablets are very much like ships from the colonial days of the past. Then, the countries with the best merchant navies dominated the seas and, as a result, became the richest and most powerful nations in the world.

Today, we have shifted from shipping physical goods to digitally transmitting services and media, and companies with the best vessels control the digital trade. Yet smartphones, tablets, and laptops are more than just vessels and delivery mechanisms for digital content. Form Follows Meaning Those with an understanding of history will know that the power of symbolic objects is not new. Reporters' Roundtable: Elements of tech design (podcast) This week, the Roundtable is live from CES in Las Vegas. 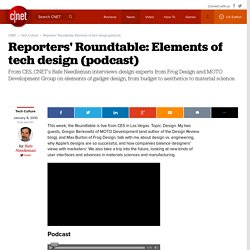 Topic: Design. My two guests, Gregor Berkowitz of MOTO Development (and author of the Design Review blog), and Max Burton of Frog Design, talk with me about design vs. engineering, why Apple's designs are so successful, and how companies balance designers' views with marketers'. We also take a trip into the future, looking at new kinds of user interfaces and advances in materials sciences and manufacturing. Hosts CCA student final critique « LUNAR > creativity that makes a difference industrial design, product design, engineering design, graphic design, interaction design. LUNAR hosts CCA student final critique We love the fresh take on design that comes from students, especially those studying at one of our favorite schools — the California College of the Arts in San Francisco. 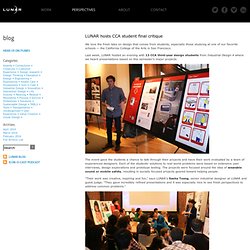 Last week, LUNAR hosted an evening with 13 CCA third-year design students from Industrial Design 4 where we heard presentations based on this semester’s major projects. The event gave the students a chance to talk through their projects and have their work evaluated by a team of experienced designers. Each of the students’ solutions to real-world problems were based on extensive user interviews, design explorations and prototype testing. The projects were focused around the idea of wearable sound or mobile safety, resulting in socially focused projects geared toward helping people. Artefact - Technology Product Design for the 21st Century. Tech Moves to the Background as Design Becomes Foremost. Stephen Lam/ReutersCraig Federighi, Apple’s senior vice president for software engineering, discussing the redesign of its mobile software system.

In the last few decades, the computing industry has passed through several different eras. In the ’90s, the big tech companies were in a race for faster and more powerful computers. Then in the 2000s, the industry moved to mobile in a quest for slimmer phones with brighter screens. Now, the industry is entering the era of design. As I noted in my column this week, Disruptions: Mobile Competition Shifts to Software Design, tech companies are looking for ways to make sure the user interfaces of their products are unique.

Design experts I spoke with noted that many of the devices we use today look almost exactly the same, which explains the emphasis on the software that goes into that interface. Electronics Designers Struggle With Form, Function and Obsolescence. Nick Bilton/The New York TimesThe result of movable object (iPhone) meeting immovable object (pavement) Sorry, Steve Jobs, I owe you a new iPhone. For the past few weeks I’ve been using a loaner iPhone 4 from Apple. As most reviewers have pointed out, the silky smooth glass front and back makes the phone an object that is a pleasure to hold. But not to drop. An object made of glass surely needs protection, right? I thought it would work beautifully until I dropped my iPhone on the concrete on Tuesday evening.

Over 2000 designers have participated in the exhibitions to date. The Future of Product Design. Creativity that makes a difference industrial design, product design, engineering design, graphic design, interaction design » Education. Bun vs. Plastic Fork. By Kajsa Westman - August 22, 2011 A lifecycle analysis of a design before it flies is tough task, the specs are likely to not exist prior to the product being on the market. It’s next to impossible to locate the hidden toxic traps, logistic nightmares, and energy thieves without expensive testing of the supply chain form start to finish. It’s also possible to miss out on finding better logistic solutions, material and energy savings as well as consumer benefits. Frog Design Strengthens Creative Leadership with New Appointments. Global innovation firm frog design today announced that it is expanding its creative leadership team with several new appointments.

Frogdesign: frog's Max Burton: Moving from... Tangible Thinking. By Max Burton - April 4, 2011 One of the aspects about industrial design that I enjoy the most is that I can combine thinking and making together at the same time. As soon as I have even the vaguest of ideas, I'm off to the workshop. I find that my ideas truly come to life in the process of tinkering, modeling, experimenting, It’s a fuzzy, random moment where the thoughts buzzing around in my head somehow come together and form one cohesive idea.