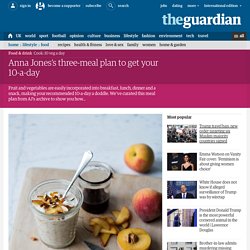 Makes 2 bowlsFor the overnight oats 80g rolled oats 50g rye flakes1 lemon 200ml almond milk (or milk of your choosing)1 apple In the morning 1 tsp barley malt or maple syrup 2 ripe peachesA dollop of Greek yoghurt A handful of almonds, toasted and roughly chopped 1 The night before you want to eat this for breakfast, combine the oats and rye flakes in a bowl with the zest of half the lemon and the milk.

Grate the apple into a little bowl and squeeze over a tiny bit of lemon juice, toss to stop browning, then add to the oats. 2 In the morning, sweeten the oats mixture with a drizzle of barley malt or maple syrup, then mix well. 3 Divide between two bowls and slice the peaches over the top. Anna Jones’s recipes for making porridge more interesting. Porridge: do we really need a recipe for that? 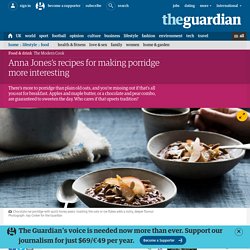 That for me is the real joy of porridge – it is simple; foolproof even. I have come to learn it’s a very personal thing, a ratio between oats (or other quick-cooking flaked grains) and a liquid, be it water, milk of any kind, juice or even, if you veer towards decadence, a bit of cream. No two people I know make it quite the same way, and I know of a few households where porridge is made in individual pans to suit differing requirements of oats, milk, consistency and flavour. Baked Oatmeal with Berries and Lentils - Dinner With Julie. It seems everyone is making baked oatmeal these days – or maybe just Molly and Jeanette (hi!) 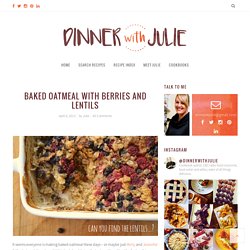 – but each time I see it I think – I should give that a try with red lentils. And so this morning when I woke up to grey, and (yet more) snow on the ground, watched the neighbour scrape ice off the car windshield, and had to return from the bathroom to retrieve wooly socks to protect my feet from an ice-cold floor, I grumpily decided that this might be the day to give it a go. When I wrote Spilling the Beans with my junior high school BFF Sue, baking possibilities opened up when she mentioned her habit of stirring a spoonful of lentils into her morning porridge to boost fibre and protein. Genius, I say. Our seven healthy starts to the day will help you build muscle, lose weight and get more energy. Gluten and dairy free porridge recipes from Maple & Fitz: Miso Oats & Quinoa Kick. Did you know that one in two Brits are porridge eaters, while nearly a quarter do so almost daily? 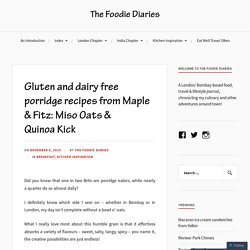 I definitely know which side I veer on – whether in Bombay or in London, my day isn’t complete without a bowl o’ oats. What I really love most about this humble grain is that it effortless absorbs a variety of flavours – sweet, salty, tangy, spicy – you name it, the creative possibilities are just endless! Case in point: the breakfast miso porridge at Maple & Fitz, one of my favourite healthy hangouts in London dedicated to delectable clean eats and treats. The 10 best breakfast recipes. Warm grapefruit and orange with toasted coconut An invigorating, caramelised, citrus fusion, mellowed with sweet, toasted coconut – a great start to your day. 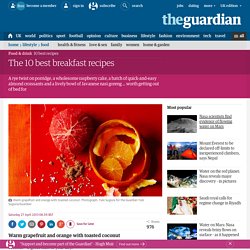 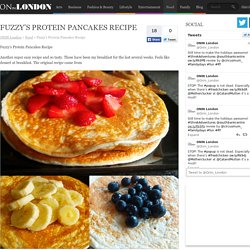 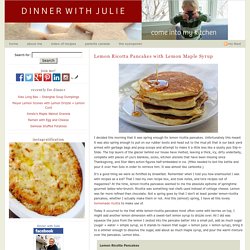 Unfortunately this meant it was also spring enough to pull on our rubber boots and head out to the mud pit that is our back yard armed with garbage bags and poop scoops and attempt to make it a little less like a slushy poo Slip-n-Slide. The top layers of the glacier behind our house have melted, leaving a thick, icy, dirty underbelly, complete with pieces of Lou’s blankies, socks, kitchen utensils that have been missing since Thanksgiving, and Star Wars action figures half-embedded in ice. (Mike needed to boil the kettle and pour it over Han Solo in order to retrieve him. Coconut lovers beware. I haven’t used canned pumpkin for a few weeks now and was wondering if I would still be in the mood for it. 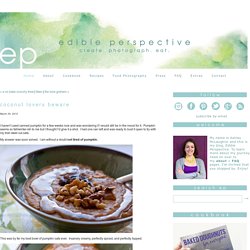 Pumpkin seems so fall/winter-ish to me but I thought I’d give it a shot. I had one can left and was ready to bust it open to try with my Irish steel cut oats. My answer was soon solved. Top 5: Incredible Winter Porridge RecipesAbout Time Magazine. The mornings are getting darker and colder as the autumnal weather approaches, and let’s face it, there’s nothing more we want to do than hit snooze and roll over for another five minutes kip. 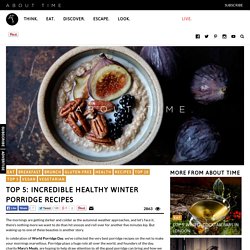 But waking up to one of these beauties is another story. In celebration of World Porridge Day, we’ve collected the very best porridge recipes on the net to make your mornings marvellous. Porridge plays a huge role all over the world, and founders of the day, charity Mary’s Meals, are hoping to help draw attention to all the good porridge can bring and how we can all raise vital funds for the charity by making our favourites. Banana Cream Pie Overnight Oats. Good afternoon! 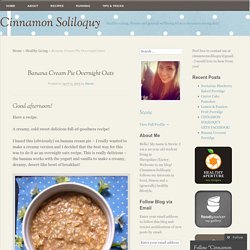 Have a recipe. A creamy, cold sweet delicious full-of-goodness recipe! Hot Cross Bun Baked Porridge. Hi there everyone! As you know Easter is nearly upon us, and as it is Good Friday tomorrow I thought I would share my spin on the traditional food eaten on Good Friday: the Hot Cross Bun! Obviously I wanted to incorporate oats so I have come up with my version of Hot Cross Bun Baked Porridge! It is really delicious – the spice combined with the sweet fruit and the tang of the orange zest really present those traditional Easter flavours. Food - Recipes : Healthy plum crumble. Jack Monroe’s black pudding and carrot hash recipe. There is a thing that happens when your better half runs a pork restaurant – you start to become a bit obsessed, incorporating pig into everything with gay abandon. It starts with lardo on toast and ends up with bacon in ice-cream … everything’s better with a top-up of vitamin P. And once you have a reputation as a pig obsessive, people shower you with porcine presents.

Where they might have once bought flowers, you get a packet of sausages or a fennel rub. A particularly memorable piggy gift recently was from my German friend Lea, who left a trail of blutwurst in her wake. Soft, dense, meaty and delicious, blutwurst is the black pudding for black pudding junkies – and so the morning after her boozy leaving dinner the night before, this happened. (Makes around 10 fritters) 200g potatoes 400g carrots.

Season’s eatings: baked rhubarb. Rhubarb is available all year round, as it grows well in a hot house, and can be “forced” (a process by which the plant’s crown is covered, forcing the rhubarb to produce early), but rhubarb is still a symbol of spring. We have such mild winters in Australia, there’s no great melt, except in alpine regions. There’s no cracking of frozen lakes, no creak and groan of unfreezing. It’s only imported trees that lose their leaves – for the most part winter is still green. But we still have a yearning for warmth, and there’s a great celebration in the lengthening days. Rhubarb, with its perky crimson stalks, waving its giant triangular leaves, is a celebration. Food - Recipes : Mexican sweetcorn pancakes, poached eggs and salsa.

Baked Banana Oatmeal. Baked Oatmeal turned out great!!! I studied a bunch of recipes and came up with my own based on other techniques. Of course mine featured banana as the star ingredient! 1) Bananas Slice 2 bananas. The Hot Plate » Polenta Breakfast Bake. One of my favourite things about the weekend is Sunday brunch. I love brunch so much, I try to have it every weekend just so I can make my Polenta Breakfast Bake. This bake is the perfect meal to serve with fresh fruit or a salad because it already has sausage and carbs! I especially love this meal because I suffer from something called pernicious anemia.

This is similar to an iron deficiency but instead it occurs when the body is unable to absorb B-12. During my university years when the symptoms started to manifest I had no idea why I was feeling so low energy. This Polenta Sausage Bake is an easy and delicious way for me to get 25% of my recommended daily intake without even trying. Not only is this bake full of vitamins and calcium, it also tastes amazing. *Note: dish must be made assembled at least 2-3 hours before serving because of cooling time between assembling and baking. Ingredients 1 tablespoon extra-virgin olive oil. Pumpkin French Toast. October 20, 2009. Almond sweet potato biscuits + mushroom gravy. ANDY'S FAIRFIELD GRANOLA. Baked Carrot Cake Oatmeal.

Pear, cocoa, hazelnut and raspberry baked oatmeal. We’re all familiar with the idea of ‘winter warmers’ - no, I don’t mean fleecy things and woollen garments and thermal vests (yes it is completely acceptable to wear a thermal vest at the age of twenty-five) - food that bolsters and comforts and provides temporary distraction and relief from the miserable climate outside.

Think glossy, dark, unctuous stews; rich wine sauces; anything that oozes molten cheese like a slow and calorific volcano; anything you can bring out of the oven that will bubble and turn golden and crispy, preferably with ample amounts of meat, cheese, butter or cream. With ease: baked oatmeal with blueberries,coconut & dried apricots. Wednesday April 3, 2013 The spring weather that is visiting Vancouver sure is intoxicating. Cherry, magnolia and forsythia are just a few of the flowering trees that are in full bloom right now making a canopy of gorgeous blooms that seem to trail you wherever you turn. There’s also been all kinds of cute, fat chirping robins in the branches outside our windows and lots of sunshine to boost spirits. World pancake recipe: pani pol from Sri Lanka. Pani pol pancakes from Sri Lanka. Mini Apple Cinnamon French Toast Casseroles. Super-healthy banana bread.

Question 1. Looking at the above photo, what do you see? A) Four bananas. b) The kitchen bin's next mouthful. c) A treasure trove of glittering gastronomic potential just waiting to be exploited. Irish oat porridge with banana, mango and coconut milk recipe. It's hard to beat the rough texture of steel-cut oats, with their slight resistance against the teeth. The rest of the components here offer pure, lazy-morning comfort, although you can wake yourself up properly by adding a little zing of lime. What Should I Eat For Breakfast Today ? March 17, 2014. Danish rye bread and beer porridge recipe. Spicy Sausage and Egg Breakfast Casserole. For the first time ever, we hosted our family Christmas gathering in Nashville this year and it was a success! Well, at least I think so. Hopefully the in-laws feel the same way ;-) As part of the festivities, we had brunch on Christmas morning with Ravi’s immediate family. When I was brainstorming the menu, I knew I wanted to serve a couple of things that I could prepare the night before to save time and energy the morning of.