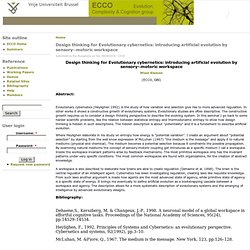 In other works it shows a constructive growth of evolutionary systems. Evolutionary studies are often descriptive. The constructive growth requires us to consider a design thinking perspective to describe the evolving system. Where Heylighen elaborate in his study on entropy how energy is "potential variation". A workspace is also described to elaborate how brains are able to create regulation (Dehaene et al. 1998). 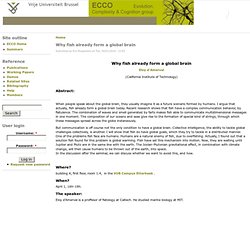 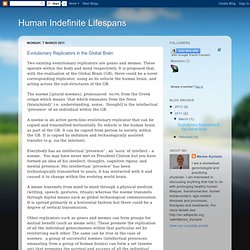 These operate within the body and mind respectively. It is proposed that, with the realisation of the Global Brain (GB), there could be a novel corresponding replicator, using as its vehicle the human brain, and acting across the sub-structures of the GB. The noeme [(plural noemes), pronounced no:ĭm, from the Greek νόημα which means ‘that which emanates from the Nous (brain/mind)’ i.e. understanding, sense, thought] is the intellectual ‘presence’ of an individual within the GB. Try the Poietic Generator? - Games for Impact - by IdeaScale. Games that Can Change the World. Posted by Mark DeLoura on December 13, 2013 at 03:44 PM EDT I’m calling for investments in educational technology that will help create. . . educational software that’s as compelling as the best video game. 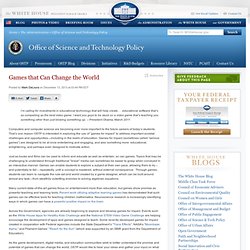 I want you guys to be stuck on a video game that’s teaching you something other than just blowing something up. -- President Obama, March 2011. g0eyoisj Shared by. Physical Foundations of Self-organizing Systems. Atanu Bikash Chatterjee (Indian Institute of Technology Madras) Abstract Nature has always played an important role in shaping numerous laws of natural sciences. 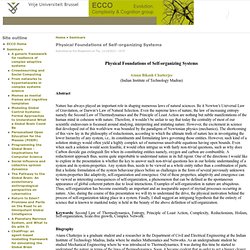 Be it Newton’s Universal Law of Gravitation, or Darwin’s Law of Natural Selection. Even the supreme laws of nature, the law of increasing entropy namely the Second Law of Thermodynamics and the Principle of Least Action are nothing but subtle manifestations of the human mind in cohesion with nature. Keywords: Second Law of Thermodynamics, Entropy, Principle of Least Action, Complexity, Reductionism, Holism, Self-organization, Scale-free growth, Complex Network. Biography Atanu Chatterjee is a graduate student and a researcher in the Department of Civil and Electrical Engineering at the Indian Institute of Technology Madras, India where he studies Mathematics and Networks. OlivierAuber : #GlobalBrain => #GlobalHair... Dabrowski's Theory of Positive Disintegration. Lotte van Lith Abstract: The Polish psychiatrist Kazimierz Dabrowski (1902 -1980) developed the Theory of Positive Disintegration. 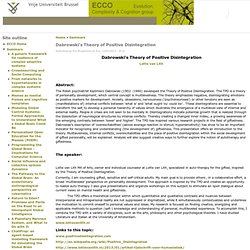 The TPD is a theory of personality development, which central concept is multilevelness. The theory emphasizes negative, disintegrating emotions as positive markers for development. Anxiety, obsessions, nervousness (‘psychoneuroses’) or other tensions are seen as (manifestations of) internal conflicts between ‘what is’ and ‘what ought to/ could be’ . The speaker: Lotte van Lith MA of Arts, owner and individual counselor at Lotte van Lith, specialized in auto-therapy for the gifted, inspired by the Theory of Positive Disintegration. Currently, I am counseling gifted, sensitive and self-critical adults. 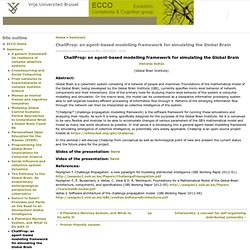 Foundations of the mathematical model of the Global Brain, being developed by the Global Brain Institute (GBI), currently specifies micro-level behavior of network components and their interactions. Ecco.vub.ac.be. GNUize them all Blueprint for a Cyborg Spoiling Agent V0.1, to be part of a Global Immune System? She speaks Japanese. 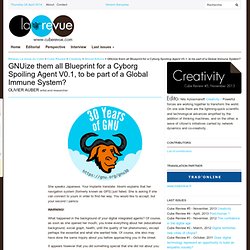 Your implants translate: Akemi explains that her navigation system (formerly known as GPS) just failed. She is asking if she can connect to yours in order to find her way. You would like to accept, but your second I panics: What happened in the background of your digital integrated agents? Of course, as soon as she opened her mouth, you knew everything about her (educational background, social graph, health, until the quality of her pheromones), except perhaps the essential and what she wanted hide. OlivierAuber : @ #GlobalBrain seminar:... Interversity, a concept for self-organizing distributed university. Mixel Kiemen Abstract: Universities are historically seen as places of universal knowledge. 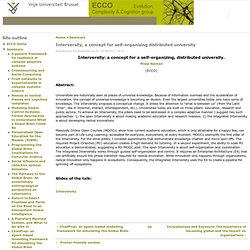 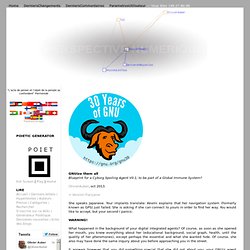 OlivierAuber, oct 2013. > Version française. Visualization of #GlobalBrain community. The Global Brain Institute. GnuizeThemAll. BrinkofSingularity. Visualization of #GlobalBrain community. The Pathway to the Global Brain: An evolutionary anthropological perspective on cybernetics. Cadell Last (University of Toronto www.cadelllast.com) Abstract: Evolutionary anthropology is a discipline concerned with applying evolutionary theory to explain the origin of human behaviour, genetics, migration, technology, and civilization. However, to the detriment of our understanding, the discipline rarely engages in analyses related to human system development, and what our past evolution can tell us about the future.

He holds a PhD from the University at Buffalo (2008). He is currently the director of Cyber Security Laboratory in the department of Computer Engineering and Computer Science at the Speed School of Engineering. Yampolskiy is an author of some 100 publications, including numerous books. His work is frequently profiled in popular media, such as: the BBC, MSNBC, Yahoo, New Scientist, Alex Jones Radio show and many others. Basic income versus the robots. Visualization of the #GlobalBrain "commun...

Max Tegmark: The Future of Life, a Cosmic Perspective. David Garcia: Collective Emotions in the Internet Society. We Are Now One Year Away From Global Riots, Com... OlivierAuber : #Eurovision AND #DebtCrisis... Collective Emotions in the Internet Society. Through the Wormhole: Global Network's Effects ... Francis Heylighen: Foundations for a Mathematic... MIT Savant Can Predict How Many Re-Tweets You'l... Distributed Graph Analytics with Faunus. Marko Rodriguez Abstract: Faunus is a graph analytics engine built atop the Hadoop distributed computing platform.

The graph representation is a distributed adjacency list, whereby a vertex and its incident edges are co-located with one another. What If Everything Ran Like the Internet? The Centrifuge Brain Project. Roland Benabou, Theodore A. Wells' 29 Professor... We Need to Talk about the Burgeoning Robot Midd... Global Brain Refs. Data Dealer Game: Privacy? Screw that. Turn the... Foundations for a Mathematical Model of the Global Brain.