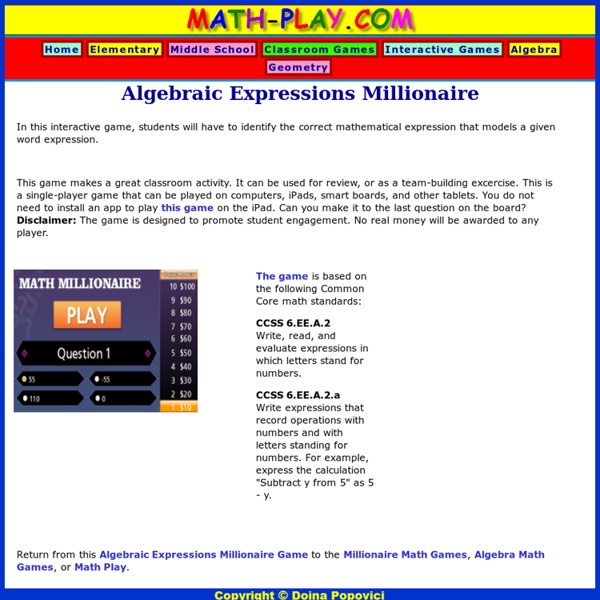 In this interactive game, students will have to identify the correct mathematical expression that models a given word expression. This game makes a great classroom activity. It can be used for review, or as a team-building excercise. This is a single-player game that can be played on computers, iPads, smart boards, and other tablets. You do not need to install an app to play this game on the iPad. Can you make it to the last question on the board? The game is based on the following Common Core math standards: CCSS 6.EE.A.2 Write, read, and evaluate expressions in which letters stand for numbers. CCSS 6.EE.A.2.a Write expressions that record operations with numbers and with letters standing for numbers.

Pi The number π is a mathematical constant, the ratio of a circle's circumference to its diameter, approximately equal to 3.14159. It has been represented by the Greek letter "π" since the mid-18th century though it is also sometimes spelled out as "pi" (/paɪ/). Being an irrational number, π cannot be expressed exactly as a common fraction. Consequently its decimal representation never ends and never settles into a permanent repeating pattern. The digits appear to be randomly distributed although no proof of this has yet been discovered.

Order Ops – An Order of Operations Game « Order Ops – An Order of Operations Game Most Popular Games on MrNussbaum.com Place Value Pirates Tony Fraction's Pizza Shop Order Ops Half-court Rounding Fun with the Impossible Penrose Triangle I found this delightful animation today: The ball is traveling around a shape that can’t exist in our real world: the Penrose triangle. This illusion is the basis for some cool art, like Escher’s Waterfall. Algebra Index Algebra is great fun - you get to solve puzzles! With computer games you play by running, jumping or finding secret things. Well, with Algebra you play with letters, numbers and symbols, and you also get to find secret things! The Basics The Order of Operations Millionaire Game In this millionaire-style game, students will use order of operations to solve math problems involving addition, subtraction, multiplication, and division including exponents and parentheses. This is a single-player game that can be played on computers, iPads, and other tablets. You do not need to install an app to play this game on the iPad. How many points can you earn? Play this fun and interractive game to show off your math skills. The game is based on the following Common Core math standards:

9 Strategies for Motivating Students in Mathematics Motivating students to be (enthusiastically) receptive is one of the most important aspects of mathematics instruction and a critical aspect of the Common Core State Standards. Effective teachers should focus attention on the less interested students as well as the motivated ones. Presented in this blog post are nine techniques, based on intrinsic and extrinsic motivation, which can be used to motivate secondary school students in mathematics. Extrinsic and Intrinsic Motivation

Complex Fractions: More Examples Complex Fractions: More Examples (page 2 of 2) Simplify the following expression: Can I start by hacking off the x – 3's? Can I cancel the 4 with the 12? Or the 3 with the 9 or the 12? Soccer Math - Dividing Fractions Game Dividing Fractions Game is another fun and interactive soccer math game that you can play online. In order to kick the ball and score points, you first have to answer math problems correctly.. To play other soccer games, please visit the Soccer Math Games Page. To learn more about dividing fractions, play these cool math fractions games. Return from this Soccer Math Game to the 5th Grade Math Games page or to the 6th Grade Math Games page.