Did You Know Archive & 14 fun facts you probably didn't know 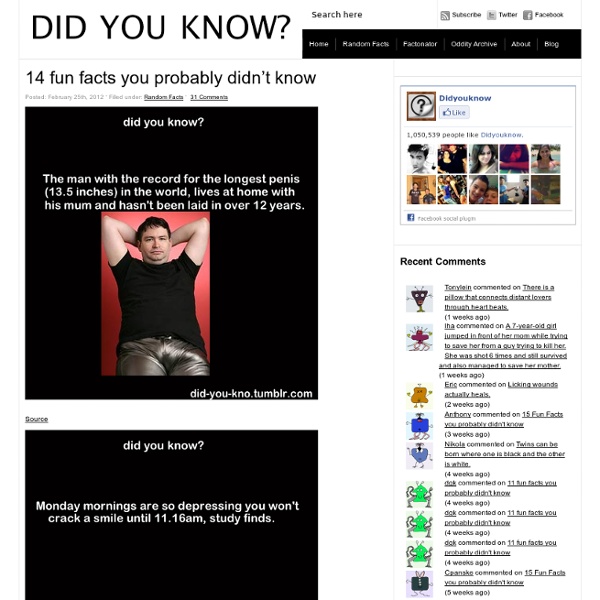 Some Bizzare and Odd things around us... Beauty of the nature lies in viewer’s eyes. A photograph is just a way to show or represent that beauty. Here is a bunch of some wonderful pictures which are not only the example of beautiful photography but are also a photograph of some miracles happening in the world. You can also call it the creativity and innovation of photographer’s mind. I think it was at the peak while taking these pictures.

How Famous Companies Got Their Names Ever wondered about how famous brands got their names from? Here are a couple of explanations. Via A Table That Turns Your Kitchen Into Mini Ecosystem [UPDATED] Convenience and efficiency are king when it comes to product design. What could be more efficient than a natural ecosystem? That's the insight behind a "living kitchen" designed by the brilliant young design studio Studio Gorm. 50 Things Everyone Should Know by Mark and Angel Self-reliance is a vital key to living a healthy, productive life. To be self-reliant one must master a basic set of skills, more or less making them a jack of all trades.

30 Most Depressing Movies TotalFilm.com recently compiled a list of the Top 30 Most Depressing Movies of all time. I think it's a pretty accurate list. It goes without saying that here be spoilers. You've been warned. 30. The Boy In The Striped Pyjamas (2008)The Misery: You might think you know what you’re in for when you sit down in front of a Holocaust movie, but nothing can prepare you for the incredibly shocking ending to Mark Herman’s film. It’ll leave you speechless.Tissues Out: Two little boys, a terrible mix-up and a gas chamber.

Sharpie Art - Extreme Sharpie Artwork at WomansDay Nowadays, Sharpie markers come in more than basic black––they’re available in every color of the rainbow, and in just about every size and shape. They’re great for everyday labeling and organizing, but did you know that they could also be used to decorate everything from guitars to fingernails? WD teamed with Sharpie to find the most unique creations from talented artists across the globe. Ten Anime Films You Should See Before You Die One of the most surprising, and gratifying, things that has happened since I started my blog, Tim Maughan Books, a year or so ago is the positive feedback I’ve had for the anime reviews—especially from people I know are far from being massive fanboys like myself. It’s gratifying because its part of the reason I started writing them; to try and introduce the medium to people who had never really indulged in it all, at least not past perhaps watching Spirited Away with their kids. The problem is, once you’ve had your first taste, where do you go next? Type ‘anime’ into Google and the results are bewildering, and without a little bit of guidance and a quality filter finding something to watch can be a daunting task. There’s a lot of shit out there, plus a lot of stuff that isn’t really meant for you…unless you’re a ADHD stricken 12 year old emo-ninja-obsessed boy that refuses to eat anything except Pocky and instant Ramen.

The Top 10 Relationship Words That Arent Translatable Into English Here are my top ten words, compiled from online collections, to describe love, desire and relationships that have no real English translation, but that capture subtle realities that even we English speakers have felt once or twice. As I came across these words I’d have the occasional epiphany: “Oh yeah! That’s what I was feeling...” Mamihlapinatapei (Yagan, an indigenous language of Tierra del Fuego): The wordless yet meaningful look shared by two people who desire to initiate something, but are both reluctant to start. Oh yes, this is an exquisite word, compressing a thrilling and scary relationship moment. It’s that delicious, cusp-y moment of imminent seduction.