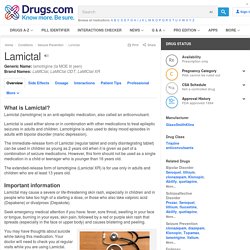 Lamictal (lamotrigine) is an anti-epileptic medication, also called an anticonvulsant. Lamictal is used either alone or in combination with other medications to treat epileptic seizures in adults and children. Lamotrigine is also used to delay mood episodes in adults with bipolar disorder (manic depression). 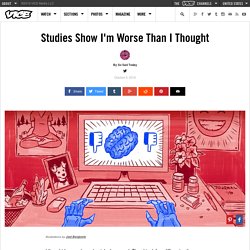 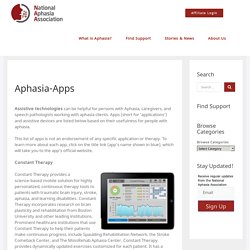 Apps (short for ‘applications’) and assistive devices are listed below based on their usefulness for people with aphasia. This list of apps is not an endorsement of any specific application or therapy. To learn more about each app, click on the title link (app’s name shown in blue), which will take you to the app’s official website. Speech Therapy Apps for Adults: Stroke, Aphasia, Dementia. Using the iPad 2 in Stroke Recovery – My Family’s Experience. Almost two months ago, a close family member suffered a devastating stroke. 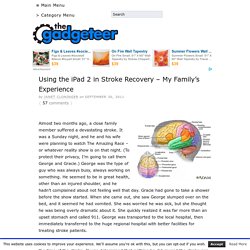 It was a Sunday night, and he and his wife were planning to watch The Amazing Race – or whatever reality show is on that night. Sensory Toy Warehouse. A fun and interesting range of age appropriate sensory products and resources, to actively engage adults, the elderly, people living with all stages of dementia, Alzheimer’s, Parkinson’s, or following a stroke or brain injury, in meaningful, purposeful and enjoyable activities and games, using a combination of skills including physical, social, emotional, cognition and sensory skills. 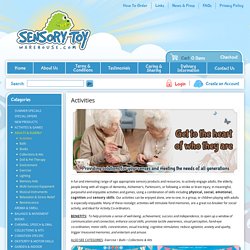 Our activities can be enjoyed alone, one-to-one, in a group, or children playing with adults is especially enjoyable. Many of these nostalgic activities will stimulate fond memories, are a great ice-breaker for social activity, and ideal for Activity Co-ordinators. Care Rocks meaningful activity in care homes. PARO Therapeutic Robot. Home Exercise Equipment For Stroke Patients. After a stroke, one may wonder what home exercise equipment would be helpful in recovery. 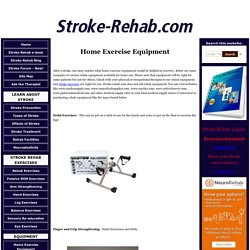 Below are some examples of various rehab equipment available for home use. Please note that equipment will be right for some patients but not for others. Sensory Toy Warehouse. Activities • Exercise • Lighting • Multi-Sensory Equipment • Musical Instruments • Relaxation & Stress Relief • Reminiscence. 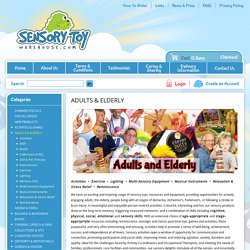 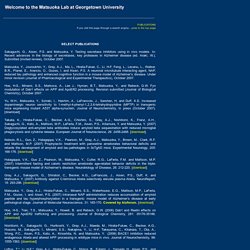 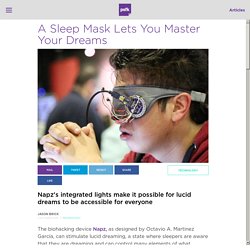 Martinez García, can stimulate lucid dreaming, a state where sleepers are aware that they are dreaming and can control many elements of what happens during the dream. When the user puts the mask on, integrated lights engage and shine through the eyelids. They focus on Rapid Eye Movement (REM), which indicate which level of sleep somebody has arrived at and how actively they might be dreaming. The lights from Napz follow the RPM and trigger the eyes to see lights which triggers the ability to interact intentionally with a dream. Study: Psilocybin Mushrooms Stimulate Growth Of New Brain Cells. Source: www.reset.me | Original Post Date: May 28, 2015 – Psychedelic mushrooms already have a reputation for helping people open their minds and broaden their perspective on the world. 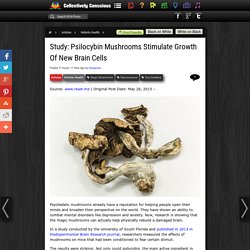 Select Test - The Psychometrics Centre. Olds & Milner, 1954: “reward centers” in the brain and lessons for modern neuroscience. Sometimes the discoveries most exciting to read about are those that were made long ago, due to the sheer advance in knowledge that they represented. Such classic studies also remind us that the most important discoveries can be made with even the most rudimentary techniques, when combined with careful observation and clever interpretation. In 1954, James Olds and Peter Milner of McGill University published a seminal paper in which they report evidence for the existence of a reward center in the brain. In the paper, Olds and Milner describe their finding that rats would continually press a lever in return for receiving nothing more than a brief pulse of electrical stimulation in a particular region of the rat’s brain called the septal area.

10 Psychological Experiments That Went Horribly Wrong. Psychology as we know it is a relatively young science, but since its inception it has helped us to gain a greater understanding of ourselves and our interactions with the world. Many psychological experiments have been valid and ethical, allowing researchers to make new treatments and therapies available, and giving other insights into our motivations and actions. Sadly, others have ended up backfiring horribly — ruining lives and shaming the profession. Here are ten psychological experiments that spiraled out of control. 10. Attention Deficit Disorder (ADHD) Test - Psych Central.

Brain Spa - Visual Memory. Guest post by SumNeuron: NeuroGaming 2014 interview round-up (Videos) Please welcome this guest post by Sumner Magruder, also known as SumNeuron to his thousands of followers on Twitter and Youtube. Sumner is a neuroscience and biomathematics student at Rhodes College, conducting research in the fields of neuroendocrinology (for social behavior) and the molecular mechanisms of memory. He is also a talented and enthusiastic reporter, who interviewed most of the exhibitors at last week’s NeuroGaming expo. Self Running Demonstration - BrainWare Safari. Adult Users Say ... I’m Using the Focusing Techniques I Learned "When I was a freshman in high school, my teacher told my dad, 'Leah doesn't know how to think.' As time went on, I realized I had trouble piecing together how certain events culminated in larger happenings.

I often forgot events in my own history. VigorousMind. Body and Mind. Quantified. NIF Webinars - Neuroscience Information Framework. 522: Connection timed out. A Novel Mechanism Regulating Stress is Identified. Neuroscience researchers from Tufts identify potential target for drug therapy for wide range of disorders associated with stress Neuroscience researchers from Tufts have demonstrated, for the first time, that the physiological response to stress depends on neurosteroids acting on specific receptors in the brain, and they have been able to block that response in mice.

This breakthrough suggests that these critical receptors may be drug therapy targets for control of the stress-response pathway. This finding may pave the way for new approaches to manage a wide range of neurological disorders involving stress. The stress-control pathway, more technically known as the Hypothalamus-Pituitary-Adrenal (HPA) axis, determines the levels of cortisol and other stress hormones in the human body. “We have identified a novel mechanism regulating the body’s response to stress by determining that neurosteroids are required to mount the physiological response to stress. MindMaster® EEG. Ltd. New Brain - New World. Klik Mental Fitness.