Notes from the Undergrad 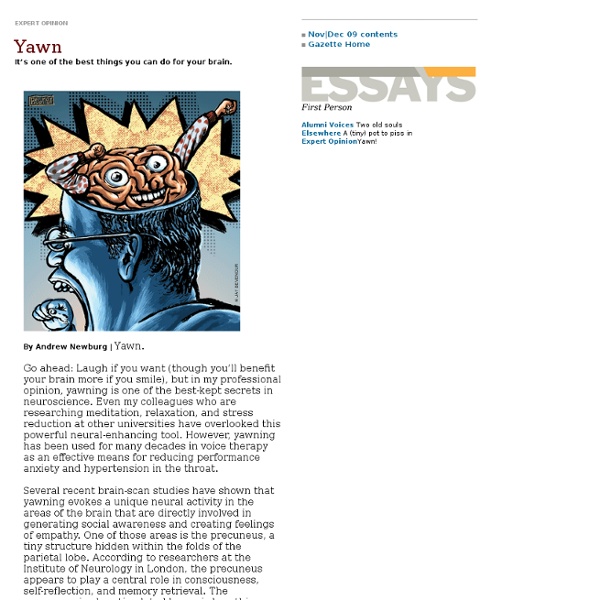 By Andrew Newburg | Yawn. Go ahead: Laugh if you want (though you’ll benefit your brain more if you smile), but in my professional opinion, yawning is one of the best-kept secrets in neuroscience. Even my colleagues who are researching meditation, relaxation, and stress reduction at other universities have overlooked this powerful neural-enhancing tool. However, yawning has been used for many decades in voice therapy as an effective means for reducing performance anxiety and hypertension in the throat. Several recent brain-scan studies have shown that yawning evokes a unique neural activity in the areas of the brain that are directly involved in generating social awareness and creating feelings of empathy. One of those areas is the precuneus, a tiny structure hidden within the folds of the parietal lobe. Why am I so insistent? As a young medical student, I was once “caught” yawning and actually scolded by my professor. My advice is simple.

Tuning In To The Brain's 'Cocktail Party Effect' Scientists are beginning to understand how the human brain accomplishes a remarkable trick known as the cocktail party effect. It's what allows us to pick out the words from just one speaker even when we're in a room full of other voices that are just as loud. For decades, scientists have puzzled over how our brain is able to focus on certain sounds while filtering out others. Now they say they're finding clues, thanks to new research on birds and bats. What they won't admit about measles outbreaks: Most children who catch measles were already vaccinated (NaturalNews) Big Pharma, the CDC and other public health organizations tell the mainstream media (MSM) what to report about outbreaks and epidemics. So you may have the impression that recent measles outbreaks are occurring because of MMR (measles, mumps, rubella) vaccination refusals. According to official public health documents kept from public attention, the opposite is true. Many stricken with measles have had the full array of three MMR vaccinations.

Ways to Improve Human Intelligence This briefing is intended to pull into one convenient, single frame of reference a body of key information which currently is scattered across a great many different contexts. Until recently, even the possibility of any such information existing was, for essentially political reasons and funding reasons, denied by most of our institutions, together with most of our educators and psychologists, so that such findings as were made in various contexts and circumstances never got discussed across a broader context. Now that it is evident that the brain, and one's intelligence, are highly changeable and that a wide variety of conditions, arrangements and techniques may be employed to improve both brain functioning and intelligence to even a profound degree, we need to make a start on getting a lot of this key information organized to where you and other inquirers can more readily get at it, understand it, and use it. Menu of Methods

Lasting Happiness Found With Hallucinogen Use? September 29, 2011 Researchers from Johns Hopkins University School of Medicine studying psilocybin, the mind-altering chemical in “magic mushrooms,” found that the chemical may actually alter people´s personalities for a long period of time, ABC News is reporting. The study involved one high dose of psilocybin administered to 51 adult study participants and found that 30 of them underwent measurable personality changes lasting more than a year. The aspect of personality that changed is known as openness. Openness, the authors wrote, “encompasses aesthetic appreciation and sensitivity, imagination and fantasy, and broad-minded tolerance of others´ viewpoints and values.” Measured on a widely used and scientifically validated personality inventory, changes in openness were larger in magnitude than changes typically observed in healthy adults over decades of life experiences, the scientists say.

What is Occams Razor? [Physics FAQ] - [Copyright] Updated 1997 by Sugihara Hiroshi. Original by Phil Gibbs 1996. Occam's (or Ockham's) razor is a principle attributed to the 14th century logician and Franciscan friar William of Ockham. 7 Skills To Become Super Smart People aren’t born smart. They become smart. And to become smart you need a well-defined set of skills. Here are some tips and resources for acquiring those skills. Memory Why Self-Compassion Trumps Self-Esteem In this incredibly competitive society of ours, how many of us truly feel good about ourselves? I remember once, as a freshman in college, after spending hours getting ready for a big party, I complained to my boyfriend that my hair, makeup, and outfit were woefully inadequate. He tried to reassure me by saying, “Don’t worry, you look fine.”