Psychologist, Providing Pathways to Personal Awareness in Brisbane, AusPsychology – Ashgrove, Indooroopilly. How to Find a Good Psychologist.docx. Psychology Facts: 10 Things You Need to Know About Psychology. Are you new to the study of psychology? 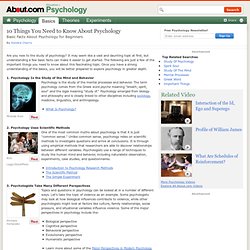 It may seem like a vast and daunting topic at first, but understanding a few basic facts can make it easier to get started. The following are just a few of the important things you need to know about this fascinating topic. Once you have a strong understanding of the basics, you will be better prepared to explore psychology in greater depth. 1. Psychology Is the Study of the Mind and Behavior Miranda Knox Psychology is the study of the mental processes and behavior. 5 surprising psychological facts you would want to know. The power of psychology The more i read about psychology the more powerful i become. 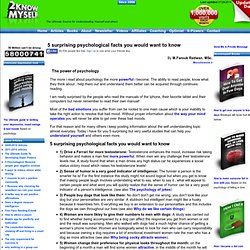 The ability to read people, know what they think about , help them out and understand them better can be acquired through continues reading. I am really surprised by the people who read the manuals of the Iphone, their favorite tablet and their computers but never remember to read their own manual! Most of the bad emotions you suffer from can be rooted to one main cause which is your inability to take the right action to resolve that bad mood. Without proper information about the way your mind operates you will never be able to get over these bad moods. For that reason and for many others i keep posting information about the self understanding topic almost everyday. 1) Drive a Ferrari for more testosterone: Testosterone enhances the mood, increase risk taking behavior and makes a man feel more powerful.

A bonus study Cut off coffee consumption for few days and watch for your improved sleeping pattern. 48 Psychological Facts About Yourself. 10 Things You Didn't Know About The Male Mind. If you’ve ever wanted to know what goes on inside the male mind, this is what happens: 1. 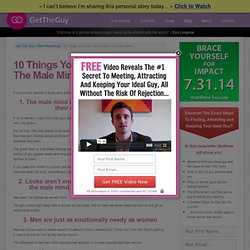 The male mind isn’t afraid of commitment – It’s their associations with it A lot of women I meet think that guys are inherently terrified of being with one person. It’s not true. The only reason is because they associate it with losing their freedom, having sexual excitement, being able to pursue whatever they want. The great news is, that these feelings are entirely within a woman’s control. If you make him WANT to commit and show him that life will only get more fun when he does, committing to you will only excite him more. 2. Men aren’t as shallow as women think. Though a man might sleep with a woman for her looks, this by itself will never make him look at that girl as relationship-worthy. 3. Men like women want a certain amount of affection from a relationship. The difference is that men often express their affection in a more physical way than women. What You Might Not Know About Psychology: A Student's Perspective. Monday, March 7, 2011 I'm no expert. 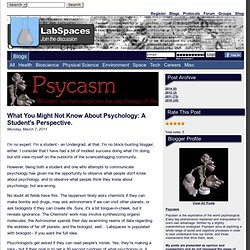 I'm a student - an Undergrad, at that. I'm no block-busting blogger, either. I consider that I have had a bit of modest success doing what I'm doing, but still view myself on the outskirts of the scienceblogging community. However, being both a student and one who attempts to communicate psychology has given me the opportunity to observe what people don't know about psychology, and to observe what people think they know about psychology, but are wrong. No doubt all fields have this. Psychologists get asked if they can read people's minds. ...and the answer is yes; for a given definition of 'read' and 'mind', and will involve a machine worth more than your house and 2 years of training.

So herein I wish to address what I have observed as some of the most common misconceptions people have about psychology, about the science of psychology, and in what context you should interpret my (and other posts/press releases) on the topic of psychology. 8 Very Interesting Psychological Facts. The Last One Really Surprised Me! Share on Facebook #1. 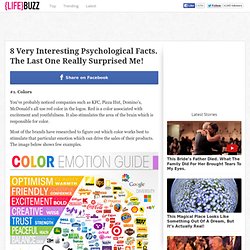 Colors You’ve probably noticed companies such as KFC, Pizza Hut, Domino’s, McDonald’s all use red color in the logos. Red is a color associated with excitement and youthfulness. It also stimulates the area of the brain which is responsible for color. Most of the brands have researched to figure out which color works best to stimulate that particular emotion which can drive the sales of their products. . #2. . #3. Here’s how to lucid dream. #4.

Researchers discovered that merely a picture of watching eyes nearly tripled the amount of money put in the box. Melissa Bateson and colleagues at Newcastle University, UK, put up new price lists each week in their psychology department coffee room. Reddit.