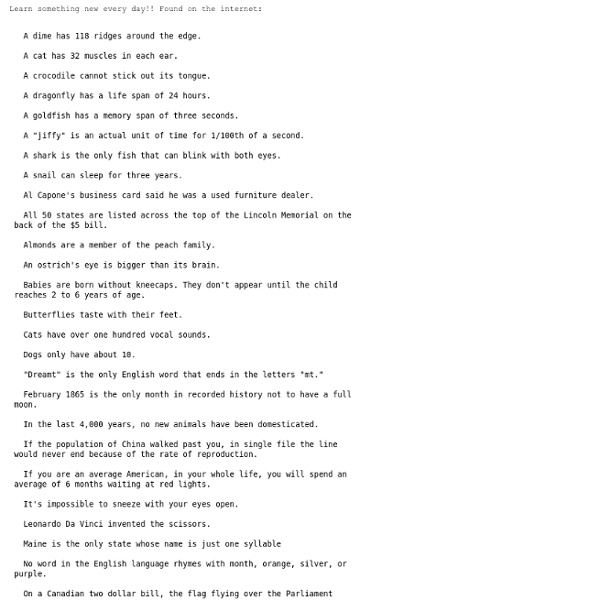 Si usted aprende Estos 13 trucos, podrás la persona más inteligente en el barrio. It’s been 22 years since MacGyver left the air, yet the 80s secret agent’s spirit of “use what whatever you have to make what you need” continues in the Internet age. Though we aren’t fighting Murdoc and other scheming assassins on a regular basis, it’s still cool to learn a few things from the guy. Here are few modern MacGyver tricks designed for the everyman. 1.) Keeping a bit of toilet paper in the bowl will reduce splashing. 2.) 15 Astounding Facts Funny This is a selection of some of the most astounding facts. For example, did you know that Starbuck spends more on health insurance for its employees than on coffee beans? Found this on Nedhardy.

The 30 Harshest Author-on-Author Insults In History [Editor's note: While your Flavorwire editors take a much-needed holiday break, we're revisiting some of our most popular features of the year. This post was originally published June 19, 2011.] Sigh. 45 Free Online Computer Science Courses Missed lectures or hate teachers? Or want to study computer science courses without going to university? … You can study anytime anywhere because there are number of free online computer science courses available on internet that are very interactive. Here is the list of 45 free online computer science courses that are designed by teaching experts from best universities of the world (almost the whole graduation!).

100 Very Cool Facts About The Human Body – Global One TV: Multimedia for Mystics The Brain The human brain is the most complex and least understood part of the human anatomy. There may be a lot we don’t know, but here are a few interesting facts that we’ve got covered. Nerve impulses to and from the brain travel as fast as 170 miles per hour. Ever wonder how you can react so fast to things around you or why that stubbed toe hurts right away? It’s due to the super-speedy movement of nerve impulses from your brain to the rest of your body and vice versa, bringing reactions at the speed of a high powered luxury sports car.The brain operates on the same amount of power as 10-watt light bulb.

Smart tips to make life easier Posted on February 24, 2012 in Humor If you’re new here, you may want to subscribe to our RSS feed or follow us on Facebook or Twitter . Thanks for visiting! Rate this Post List of inventors killed by their own inventions Franz Reichelt (d. 1912) attempted to use this contraption as a parachute. Reichelt died after he jumped off the Eiffel Tower wearing his invention, which failed to operate properly as a parachute. This is a list of inventors whose deaths were in some manner caused by or related to a product, process, procedure, or other innovation that they invented or designed.

10 More Enigmas That Defy Explanation Mysteries What is it about the bizarre and mysterious that piques our curiosity? It entertains our sense of wonder and excites our imagination, for sure. Luckily for us, history is marked with strange, logic-defying occurrences to amuse us. Here is a list comprised of 10 more unexplainable and interesting phenomenon and incidents that we crave so much. This list is made up of a mixture of two submissions to the Christmas competition which shared some items, so it seemed a good idea to combine the two to give us ten things never before shown on the site. 11 Ways to Build an Extraordinary Life 17 Jul Posted by Steve as Success How can you build the life you want? The answer to that question is different for each of us. But it’s critical that you answer it, because in the answer you will find purpose and meaning. Many of us look for happiness in things, but happiness doesn’t come from things, it comes from how we relate to ourselves and our world.

Muslim Lolita Fashion Is A New Trend Inspired By Japan In an awesome fashion mash-up that nobody could’ve foreseen, Muslim fans of the Japanese lolita fashion trend have begun pairing these sweet-as-candy outfits with their hijabs, creating a unique new style that Japanese lolita fans are falling in love with. The lolita trend, at its most basic, involves wearing modernized Victorian- or Rococo-style dresses and outfits that are heavily accessorized and painstakingly coordinated into elaborate costumes. The trend’s fans (called ‘lolitas’) then meet up at various events to spend time together and appreciate each others’ outfits (or, as they call them, ‘coords’).